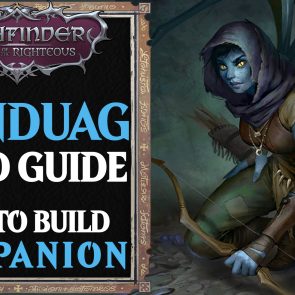 Wenduag Build Pathfinder Wrath of the Righteous Guide – In this Wenduag Build Guide, I’m going to break down the best Archetypes to multiclass with, Attributes, Skills, Feats, Mythic Path and Equipment you should take for Wenduag to make her Melee Build as lethal as possible. With this Companion, we’ll be multiclassing with the Archaeologist Bard and Dragon Disciple to significantly boost our Strength. If you’re looking for an effective DPS Build that deals massive Melee Damage using a Reach Weapon, then this Wenduag Build Guide is for you. 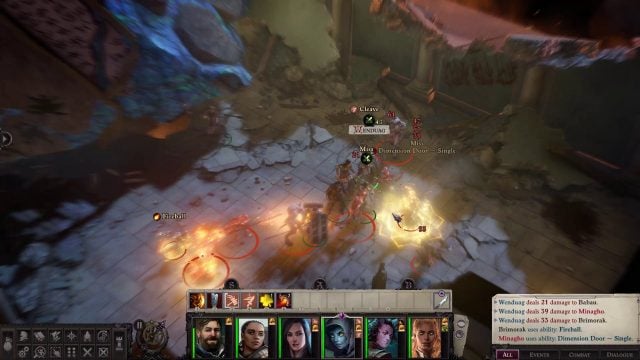 Wenduag’s Build is mostly focused on improving damage to be able to eliminate enemies quickly. On the other hand, her attacks are penalized due to the Power Attack Feat, in exchange for more damage. However, it’s still decent as she’s able to take advantage of a lot of other Feats, regardless of multiclassing, to compensate for this. Wenduag also has commendable Armor Class (AC) that can further be enhanced depending on the Equipment she wears. 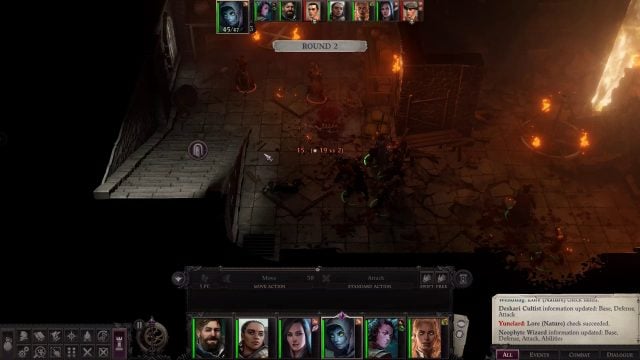 At Level 1, Wenduag automatically has the following Feats, Proficiencies and Abilities:

At Level 5, you’ll be multiclassing with the Archaeologist Bard first. The idea is to then multiclass with the Dragon Disciple Prestige Class in order to gain significant boosts for your Strength Attribute. As a result, you’re able to raise the chances of successfully hitting enemies with Melee Attacks while dealing much more damage. The greater the damage, the faster it is for Wenduag to kill and to switch onto the next enemy.

You’ll need to dip 1 level into the Bard Class and to attain a rank of 5 for the Knowledge (Arcana) Skill, only for the purposes of unlocking this Prestige Class. 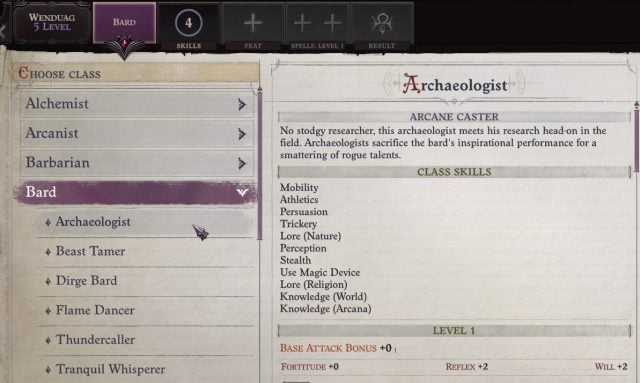 With the Bard, you can buff yourself with Archaeologist’s Luck one to two times per day, depending on your level, before the start of an encounter. Archaeologist’s Luck is a Swift Action, which means that you can do a Standard Action in the same turn such as attacking your target. It provides you with +1 Luck Bonus on Attack Rolls, Weapon Damage Rolls, and Saving Throws.

At Levels 6 to 9, you’ll multiclass with Dragon Disciple where you’ll specifically get these important features: 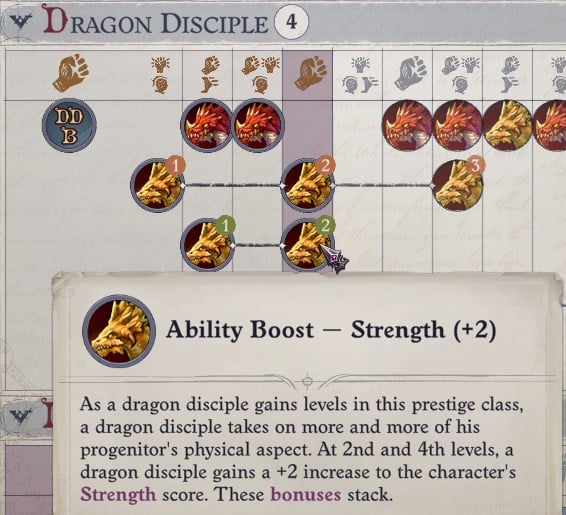 Remember that when you level up as a Dragon Disciple, the Spells you choose won’t matter since we’ll focus on building the Melee Damage dealt by Wenduag with a Reach Weapon. We won’t be able to cast Spells anyway due to our low Charisma.

Starting at Level 4 and after every four levels, you’ll be able to add 1 point to any of your Attributes. With Wenduag, you’ll only improve one Attribute and that’s Strength, which contributes to the success of her Melee Attack and Damage Rolls. This is vital since she only has a base Strength of 16 when you recruit her. After adding 4 points into this Attribute at levels 4, 8, 12 and 16, together with the +4 boost from Dragon Disciple, you’ll be able to get 24 Strength with a modifier of +7. You won’t be able to utilize the last point since it won’t raise any of the modifiers you need. 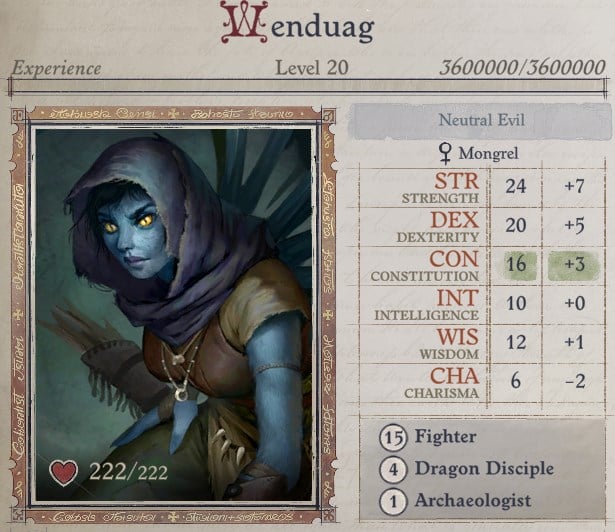 You can further enhance Strength and Constitution by equipping belts like the Belt of Physical Might. Raising your Constitution is important since it increases your max HP while improving your Fortitude Saving Throws to resist poison and disease.

Among the 6 Attributes, Wenduag’s Dexterity is inherently high at 20 with a modifier of +5. Given her Fighter Class, she has proficiency with any Armor. In our case, it’s best to equip Heavy Armor to boost our AC as much as possible. It may seem counterintuitive since this Armor Type limits your Max Dexterity. However, given Wenduag’s Armor Training Feature, she’s able to add at most +4 Dexterity Modifier to her AC by the time she reaches Fighter Level 15. 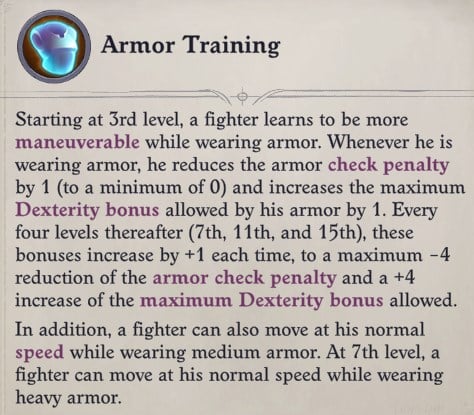 Additionally, her speed is not hampered by the Heavy Armor’s weight and her Armor Check Penalty, which reduces the effectiveness of some of her Skills, is also decreased.

When it comes to Wenduag’s Skills, you’ll invest in two Skills, namely Athletics and Mobility, since you don’t get that many points every time you level up unlike other Classes. Both of these allow you to move heavy objects to help NPCs or reveal hidden paths, jump longer distances, traverse difficult terrain with ease, and walk towards enemies to attack them without triggering Attacks of Opportunity. 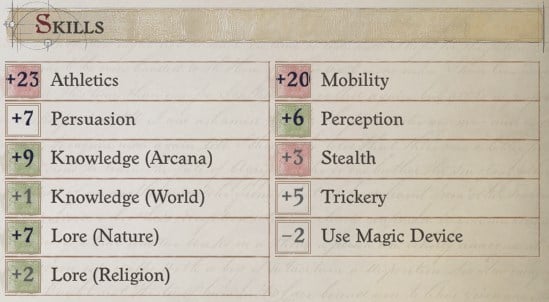 From Levels 3 to 19, you’ll be able to choose 16 Feats for Wenduag with 1 Feat at every level as long as you continue to upgrade her Fighter Class. Note that 7 of them are Bonus Feats, which don’t stack with regular Feats. 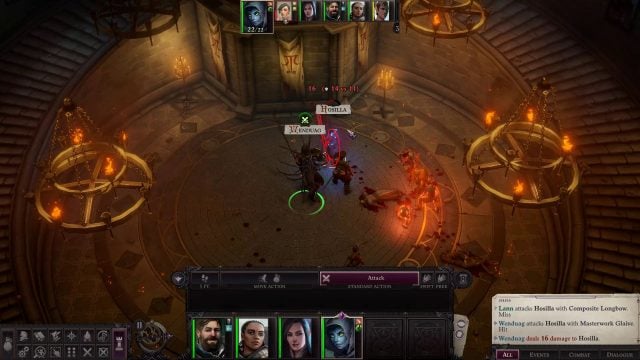 These are the important ones you ought to take in order: 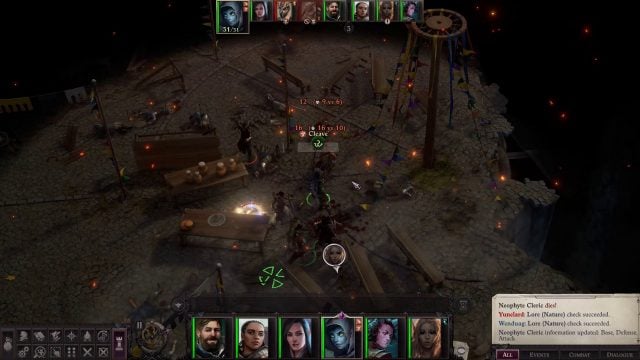 The idea here is that Cleave and Cleaving Finish are excellent Feats to get at earlier levels due to the presence of relatively weaker enemies. Specifically with Cleaving Finish, being able to greatly diminish their HP yields a second attack in the hopes of eliminating another one of their own. Just note that as the enemies become more challenging, Cleaving Finish won’t proc as often. This is the reason why in the next Feats, we’ll be focusing on other capabilities to enhance survivability as well as single-target attacks and damage.

By this time, you’ll have identified the Melee Weapon you’re comfortable wielding, which brings us to Weapon Focus and Weapon Specialization.

When it comes to Wenduag’s Weapon, you’ll want to equip a Reach Weapon like a Glaive, which deals excellent damage, in order to perform Melee Attacks at a relatively safer distance of 6 ft. from the target. This way, you lessen the chances of provoking Attacks of Opportunities. Additionally, your threatened area is larger, meaning, if your enemies are within 6 ft. of you, you’ll be able to easily hit them. 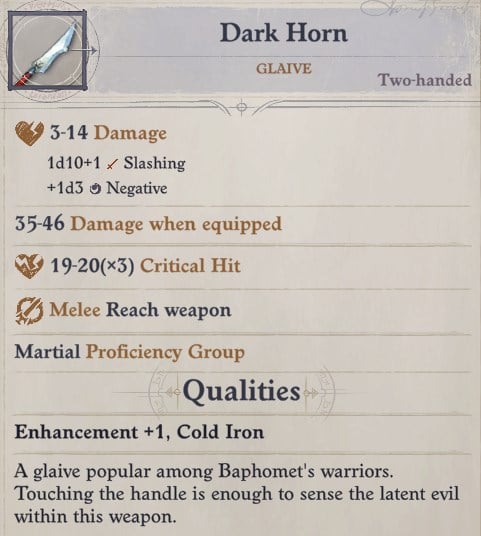 For Armor, make sure to wear Heavy Armor that significantly boosts your AC such as the Half-plate of Vigor or Carapace. Even if we’re wielding a Reach Weapon, we don’t want to sacrifice our defenses. 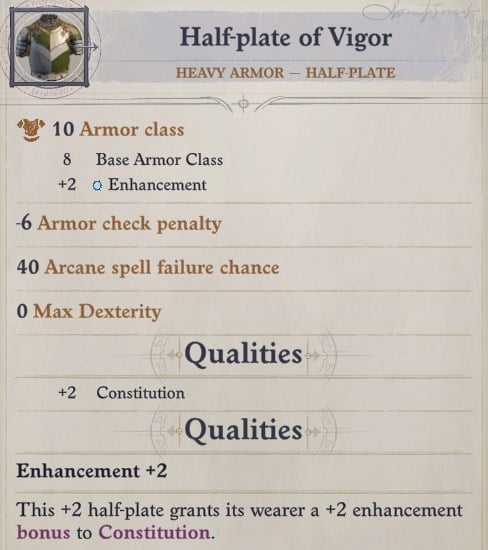 Lastly, in order to improve your AC and Saves as well as your Attributes, wear the best versions of the Amulet of Natural Armor, Ring of Protection, Cloak of Resistance, and Belt of Physical Might.

Wenduag’s Build has additional features that improve her resilience and performance in combat. At Fighter Level 2, you gain access to Bravery, which grants you Will Save Bonuses against fear. Note that this is one of the most common conditions at earlier levels so you’ll definitely benefit from it.

On the other hand, you also have Weapon Training in order to augment attacks and damage. For this one, it’s best to pick the Weapon Training for Polearms since you’re going to attack using a Glaive, coupled with Armed Bravery and Fighter’s Reflexes to enhance Will and Reflex Saves, rather than choosing a secondary Weapon Group to focus on. 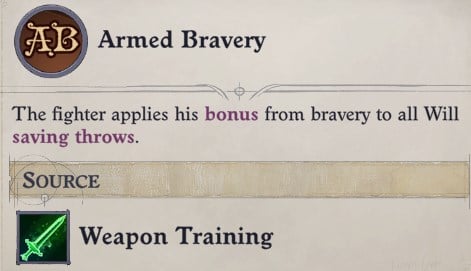 If you have a caster in the party, frequently use the Enlarge Person Spell on Wenduag to lengthen her reach and to make her damage more potent and deadly. She does receive AC and Attack Roll penalties, but it’s not enough to be concerning. Plus, her bonuses will compensate for these.

Lastly, be careful with taking other Cleave Feats like Great Cleave and Improved Cleaving Finish since there are many challenging enemies at higher levels. As such, you won’t be able to trigger these Feats as often as you’d like so these won’t be effective in the long run.