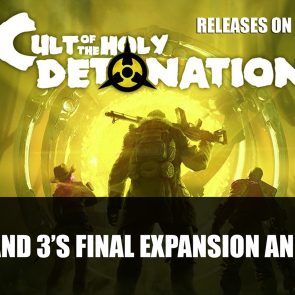 The final expansion for CRPG Wasteland 3 is Cult of the Holy Detonation.

The final expansion coming to Wasteland 3 is the Cult of the Holy Detonation, adding worshippers of a nuclear explosion held in stasis. The expansion will release on October 5th.

Wasteland 3’s second and final narrative expansion takes players to the Cheyenne Mountain complex, home to the Cult of Holy Detonation. Developers inXile shares that “Your squad of Rangers will be tested like never before in objective-based encounters that put a creative spin on the already deeply tactical turn-based combat. As they face overwhelming odds, the Rangers will need to shut down reactors, clear ventilation systems, and engage defensive countermeasures to stem an unending tide of dangerous mutants and machines within the dilapidated military bunker.”

The expansion adds new weapons and armor as well as more enemies to Wasteland 3. The expansion can be picked up as part of the expansion pass or separately, or in a bundle collection. The Wasteland 3 Colorado Collection includes the previous Battle of Steeltown expansion, and the Colorado Survival Gear DLC as well.

For more news be sure to check out next Broken Roads A Post Apocalyptic RPG Set In Australia Announced and Crusader Kings 3 Is Coming To Playstation 5 And Xbox Series X.