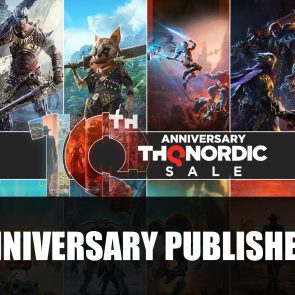 THQ Nordic are celebrating their 10th anniversary with a big sale across plus two free games.

THQ Noric celebrates the 10 year anniversary milestone with a big sale on their games. You can pick up the furry RPG Biomutant with 34% off on Steam now $39.50 was $59.99, plus the remaster Kingdoms of Amalur Re-Reckoning for 60% off now $15.99 was $39.99. Not only great discounts but two free games on Steam are now available the classic Titan Quest Anniversary Edition and Jagged Alliance Gold Edition.

And if that’s not enough for you, grab two THQ Nordic classics FOR FREE! Claim the Titan Quest Anniversary Edition and the Jagged Alliance 1: Gold Edition right now and they’re yours forever. pic.twitter.com/vJNx7yRZu6

Previously THQ announced that they will be unveiling six new games at their 10th anniversary digital showcase which will be happening on September 17th at 12PM PST. According to the tweet thread the showcase will be hosted by Geoff Keighley, the executive producer and presenter of The Game Awards. The stream will feature six new games which will include the “return of legendary and franchises and sequels”.

They also recently announced the DLC Kingdoms of Amalur: Re-Reckoning Fatesworn is in the final stages of production. While not showing much except for an image of a new area Gale Crossing, hopefully we’ll be hearing more during the livestream.

For more news find it here in Astria Ascending Gets New Intro Trailer and Tales Of Arise Has Now Shipped Over 1 Million Copies; Fastest Selling Game In The Tales Franchise.