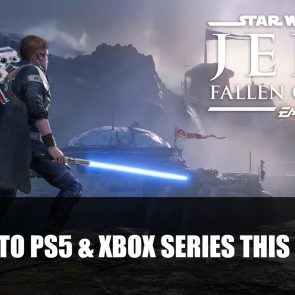 Star Wars Jedi: Fallen Order first launched on PS4, Xbox One and PC in November 2019, now it will be getting a version for PS5 and Xbox Series this summer. The versions will have “a number of technical improvements,” according to the post on the official Star Wards website.

Those who already own the game on Playstation 4 or Xbox One will receive a free upgrade on their respective consoles PS5 and Xbox Series. The post doesn’t mention the exact details/requirements for the cross-generation upgrade but we can expect details at a later date.

This is the latest entry in the Star Wars universe of gaming which includes lightsaber combat, complete with striking, parrying and dodging. It tells a new story following a former Padawan who will need to complete their training in order to revive the Jedi order, but it must be done before the Imperial Inquisitors get wind of the situation.

If you can’t wait for the PS5 or Xbox Series version you can pick up the Standard and Deluxe Editions for PS4 and Xbox One with 70% off until May 12th. The same goes for the Steam and Origin versions on PC.

In case you missed it there is a big Golden Week sale on for the Playstation Store so you can grab some great titles for less.

Star Wars Jedi: Fallen Order is currently available on PS4, Xbox One and PC. The game will also be coming to PS5 and Xbox Series this summer.

For more news be sure to check out next Big PSN Golden Week Sale Includes NieR Automata, Persona 5 Royal & More and Bless Unleashed PC Beta Releases Next Week With A Number Of Changes.