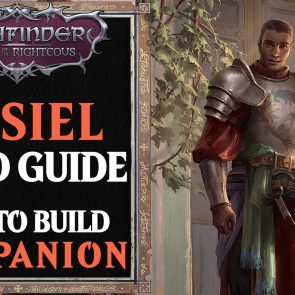 Sosiel Build Pathfinder Wrath of the Righteous Guide – In this Sosiel Build Guide, I’m going to break down the Attributes, Skills, Feats, Spells, Mythic Path, and Equipment you should choose in order to make the most out of Sosiel’s pure Cleric Build. Instead of multiclassing with another Archetype, we’ll focus on enhancing this straightforward Build. If you’re looking for a versatile Spellcaster who’s able to heal and buff the party while dealing decent damage with Necromancy Spells, then this Sosiel Build Guide is for you!

By default, Sosiel’s Cleric Build is far from ideal. Although he has Toughness to boost his HP, he has an insanely low Dexterity at 10. This is made worse due to the Medium Armor Focus Feat, which is not a good match for no Dexterity bonus. AC is a very important defensive trait since it determines how good you are at avoiding enemy attacks so you’d aim to boost this as much as you can.

Because of your terrible Dexterity, you’re also locked out of choosing Dodge and Combat Mobility Feats, which enhance survivability, making it infeasible to turn you into a Tank Character. As such, we’re going to invest in Heavy Armor Proficiency and Shield Focus in order to raise our AC. Completely disregarding Medium Armor Focus is a worthy trade off since doing so improves our defenses. Despite Sosiel’s Proficiency with Reach Weapons, we won’t be enhancing our Martial Abilities any further as this Companion Build focuses on Spellcasting. 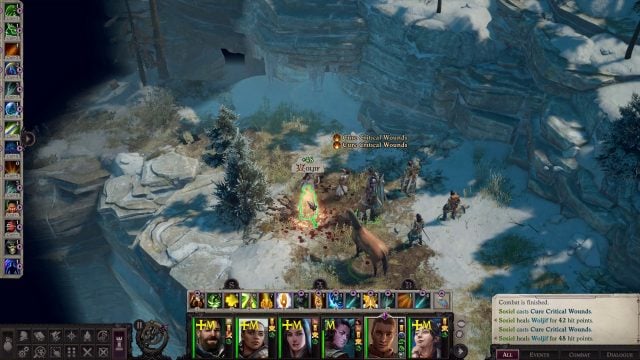 As a pure Cleric, we’re going to capitalize on some of the Feats, Proficiencies and Abilities that we already have from the moment Sosiel is recruited. At Level 1, you get Channel Positive Energy together with the Selective Channel and Extra Channel (Cleric) Feats. These appropriately limit the range of your Channel Positive Energy Abilities when you intend to either heal allies or damage the Undead. If for instance, you restore the HP of your party using this Ability, enemies who are located inside the AoE won’t be affected so their HP will remain as is. What’s more is you get to cast Channel Positive Energy numerous times per day. 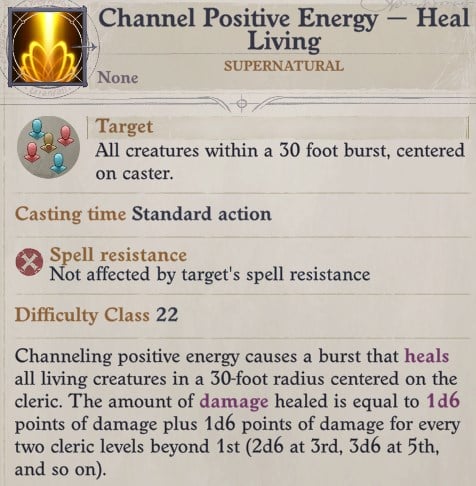 When you activate Channel Positive Energy – Damage Undead, it’s corresponding Spell DC accounts for your Charisma Modifier. The higher this is, the harder it is for enemies to reduce the damage they receive in half. Since your Charisma isn’t as good as Wisdom, you’ll need to personally cast Eagle’s Splendor beforehand. It adds +4 Enhancement Bonus to Charisma, making this Ability potent.

Next, you have the Luck and Good Domains. With either of them, you simply have to touch your allies to improve their D20 Rolls, may it be Attack Rolls or Saves. Since you’ll be positioned near them or at the center of the party, it’ll be easy for you to use these buffs. You also gain Spells to boost your and your party’s defenses while serving as a Secondary Healer. Lastly at Cleric Level 8, you gain Holy Lance to imbue Weapons with the Holy Property for the purposes of bypassing Damage Reduction (DR) and dealing extra damage against enemies with the Evil Alignment. 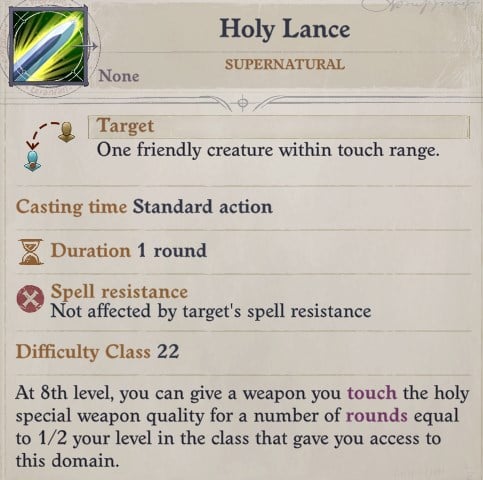 Starting at Level 8 and after every four levels, you’ll be able to add 1 point to any of your Attributes. With Sosiel, you’ll only increase one Attribute, particularly Wisdom. At Levels 8, 12, and 16, you’ll be investing 1 point into Wisdom to raise its corresponding modifier to +6. Wisdom is the Cleric’s Spellcasting Ability, which is needed to cast and learn countless Spells. 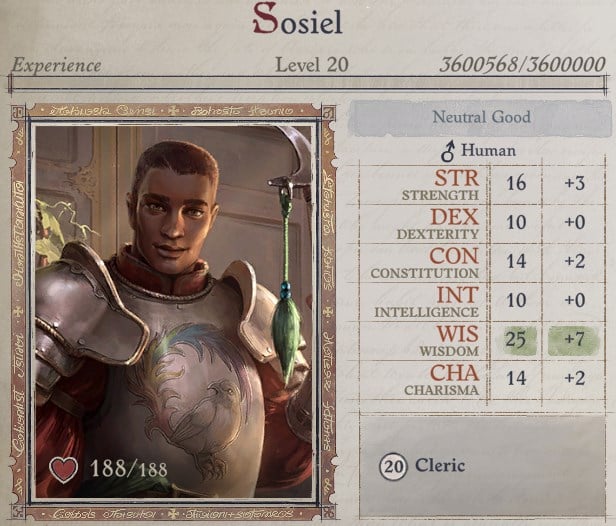 You can then raise this Attribute even further by personally casting Owl’s Wisdom, which provides you with +4 Enhancement Bonus. Note that the Spell’s bonus doesn’t stack with the bonus gained from the Inspired Headband of Wisdom so unless you’re able to get a hold of this Headband’s +6 Version, you ought to keep using Owl’s Wisdom. On the other hand, If you acquire it, you can replace the Spell with Boneshaker or Eagle’s Splendor.

When it comes to Skills, you’ll want to enhance Lore (Religion), Perception and Persuasion due to the bonuses you initially have with these. Lore (Religion) provides vital information such as the strengths and weaknesses of enemies who reside in extraplanar realms. 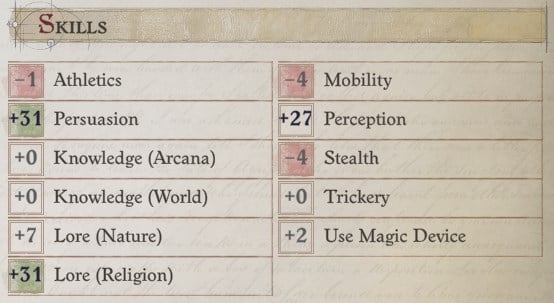 Perception makes Sosiel attuned to his surroundings and as a result, he’s able to sense the presence of threats or hidden objects nearby. Meanwhile, Persuasion sways NPCs’ opinions by negotiating, intimidating or deceiving them into agreeing with you. You also receive extra XP after successfully changing their minds.

From Levels 7 to 19, you’ll be able to choose 7 Feats for Sosiel with 1 Feat at every other level. You’ll focus on acquiring those that enhance survivability as well as your performance when casting Spells. 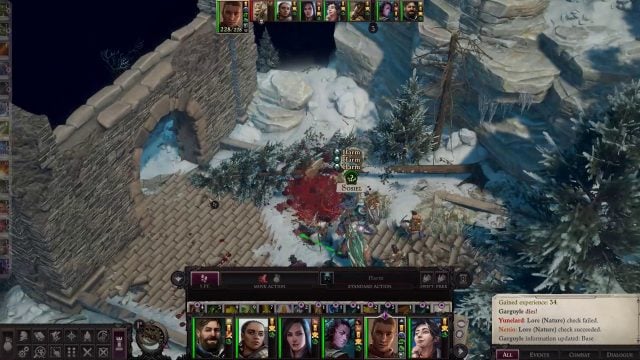 The idea behind these Feats is to first maximize the AC you receive with Heavy Armor Proficiency and Shield Focus. You can then invest in Spell-related Feats. Since you often encounter demons with DR in Pathfinder Wrath of the Righteous, you’d want to prioritize Spell Penetration over Spell Focus for the purposes of bypassing this defensive trait to deal more damage.

Since we’re going to inflict damage using Necromancy Spells that force enemies to roll for Saving Throws or Saves, you’ll want to take Spell Focus and Greater Spell Focus. In total, both Feats increase your Spell’s DC by +2, making it tougher for them to resist the damage and effects of these Spells. The last relevant Feat for this Build is Combat Casting because it provides you with Concentration Check Bonuses that you need in order to cast Spells even when you’re threatened by Attacks of Opportunity.

If you find yourself getting hit often, you can opt to take the Shield Wall Teamwork Feat and Diehard instead of Greater Spell Penetration and Greater Spell Focus. Assuming that you have an ally who also has Shield Wall, as long as you’re next to them, you gain extra AC depending on the type of Shield they’re wielding. This works well with Tower Shield Specialists and Paladins who are more likely to equip Tower Shields and Heavy Shields. 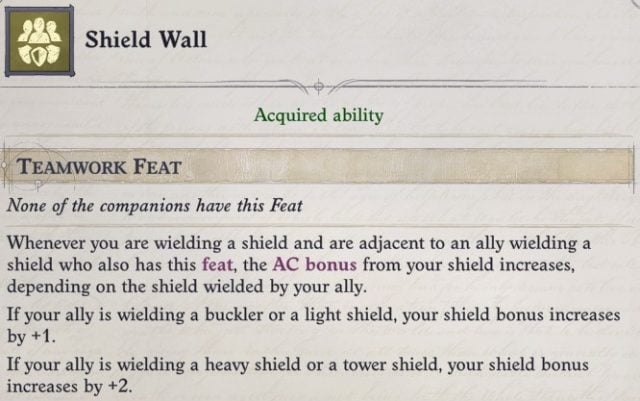 Additionally, you can also get Diehard, which makes it challenging for enemies to put you down since you continue to fight for one additional round even if your HP is below 0. But you’ll have to prioritize healing yourself so you don’t become unconscious at the end of your succeeding turn.

When it comes to Spells, your priority is to prepare the ones that provide Sosiel with boosts to Attributes as well as AC and Saves to keep him alive in encounters. Specifically, these are Shield of Faith, Owl’s Wisdom, Magical Vestment, Angelic Aspect, Cat’s Grace, Mass, and Frightful Aspect. Make sure to at least personally cast Shield of Faith and Magical Vestment at lower levels to enhance your AC. Owl’s Wisdom is also very useful to this Build because it raises Wisdom, which lets you cast higher level Spells. 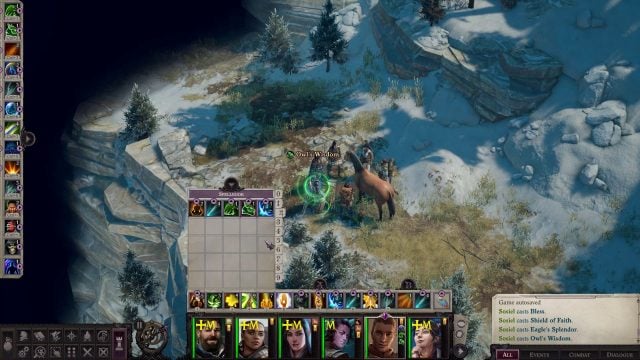 In addition to these personal buffs, you’ll cast Spells that the entire party can benefit from. These include Cure Wounds, Bless, Heal, Mass, Protection from Evil, Communal, Prayer, Burst of Glory, Restoration, and Holy Aura. Cure Wounds and Bless are staple Spells for any Support Class because they restore HP and increase the chances of successfully hitting enemies. Protection from Evil, Communal is another must-have Spell since you’re mostly going to encounter creatures with the Evil Alignment so you at least gain some AC and Save Bonuses on the attacks they make against you. 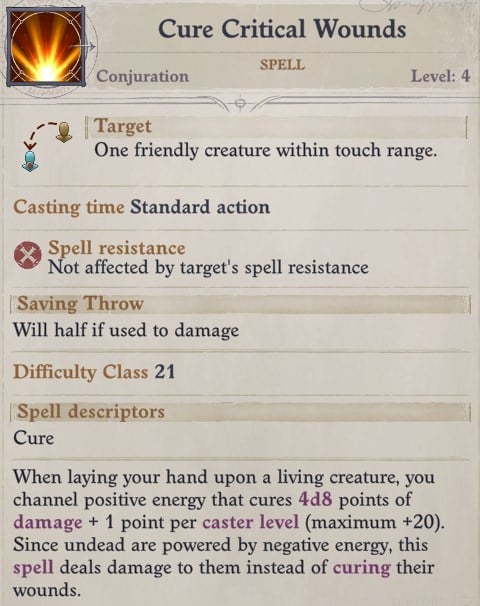 There are other Spell types like Align Weapon, Crusader’s Edge, and Greater Magic Weapon that imbue Weapons with different properties in order to overcome DR and to enhance the damage your allies inflict. Make sure to test them out and prepare them before you engage in another fight.

Next, we’ll discuss offensive Spells from the School of Necromancy. I’ve specifically chosen this Spell Type due to how powerful they are. The ones that you’re going to prepare are:

At earlier levels, you only have access to a couple of these Spells, specifically Inflict Wounds, Boneshaker, and Boneshatter, which are decent offensive and single-target Spells. However, be careful when casting Inflict Wounds since you’ll need to be nearer than usual to your enemies to utilize it.

When you reach Spell Level 6 onward, you’ll gain access to the second half of these Spells and they all deal massive damage. For instance, with Harm, Destruction and Death Clutch, you can still inflict enough damage regardless of whether or not your targets succeed in their Will and Fortitude Saves. Do note that some of these aren’t effective against the Undead since they’re either immune to it or a particular Spell heals them like Harm. 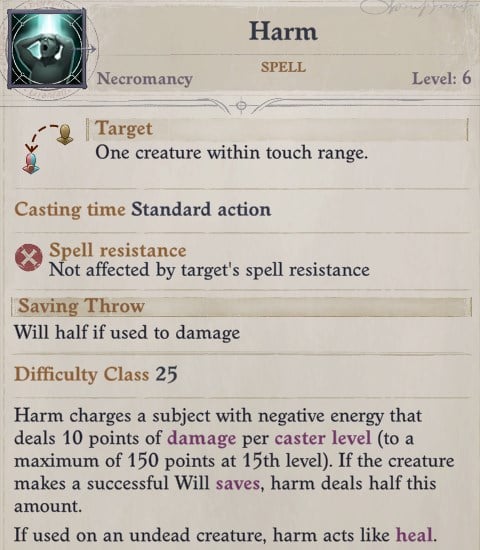 Most of these are geared towards using your Spells and Abilities as effectively and as many times as possible. For instance, when you cast any Cure Wounds Spell, the HP restored is dependent on your Caster or Cleric Level instead of the Spell’s level. As such, you’re able to heal more. Additionally, you have Domain Zealot so you can activate Abilities as a Swift Action. This lets you cast a Spell in the same turn.

For Mythic Feats, you’re going to select the Mythic versions of:

Similar to your regular Feats, these Mythic Feats improve your defenses, Caster Level Checks, and Spell DC to survive in combat and to inflict damage much more effectively.

When it comes to Sosiel’s Build, we’re not going to wield a Weapon since we won’t be performing Melee Attacks. We’ll instead focus on wearing defense-oriented Equipment, which don’t have stacking issues with any of our buffs. These include Heavy Armor and Heavy Shield like the Adamantine Full Plate +1 and Mithral Heavy Shield +2, as well as the Cloak of Resistance and Amulet of Natural Armor. Note that Heavy Shields don’t interfere with Spellcasting. 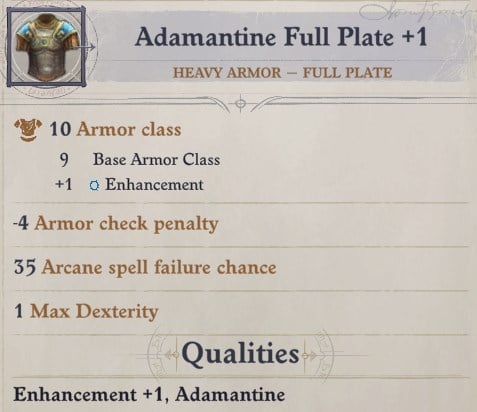 Lastly, to gain additional HP, you should wear the Belt of Might Constitution.

Sosiel’s Build isn’t well-suited to become a pure Tank or Support Character. Instead, he functions better as a hybrid Spellcaster and Healer. What makes him unique is his ability to convert any Spell to Cure Wounds should he run out of this healing Spell. Thanks to his buffs, Sosiel’s AC becomes decent although it won’t be as high compared to other Companions like Seelah and Woljif. Because of this, he shouldn’t be a frontliner, which would make him susceptible to taking multiple damage. This is the advantage of most of his Necromancy Spells, which don’t require him to move too close to enemies. 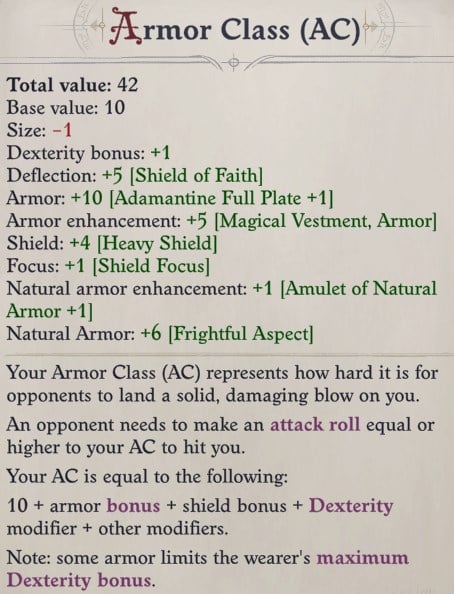 At earlier levels, you have to cast Cat’s Grace on Sosiel in order to boost Dexterity and Reflex Saves. If there’s no one in the party that has it, you can cast this Spell on yourself via the Scroll of Cat’s Grace. However, you’ll need to reach at least Rank 10 of the Use Magic Device Skill to be able to do so.

Lastly, before casting Soulreaver, which is a fantastic AoE Spell, make sure that none of your allies are located within its targeted area, otherwise, you’ll end up severely damaging them. Alternatively, you can take the Metamagic (Selective) Feat if you intend to frequently cast Soulreaver. With this Metamagic, you won’t kill your teammates by mistake.