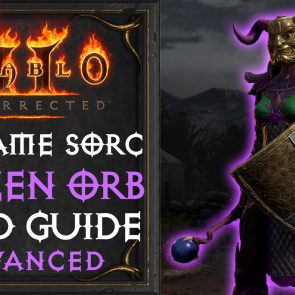 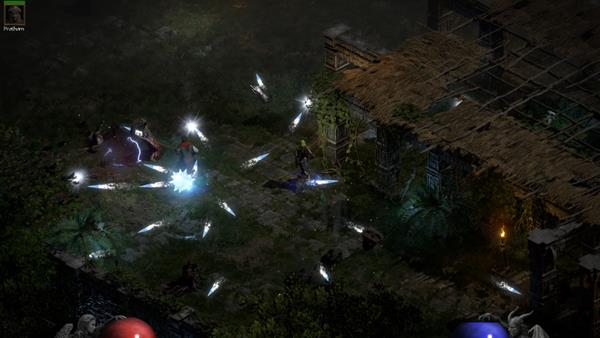 This Diablo 2 Sorceress Build is intended to be used for Nighmare and Hell difficulties starting around around Lvl 40. You can start the game with this build, but I personally recommend you use our Fire Sorceress Beginner Build instead, and then respect into this one. If you are already playing and want to respect into this build, the easiest way to do it is by calming the Den of Evil reward from Akara at the Rogue Encampment. You’ll get 3 respecs (1 for each difficulty) and you’ll need to be on the same difficulty to reclaim them.

Like most Builds in Diablo 2 Resurrected, our Stats distribution will focus on assigning enough points into Strength to meet equipment requirements, and then assigning everything else into Vitality to gain as much Life as possible. 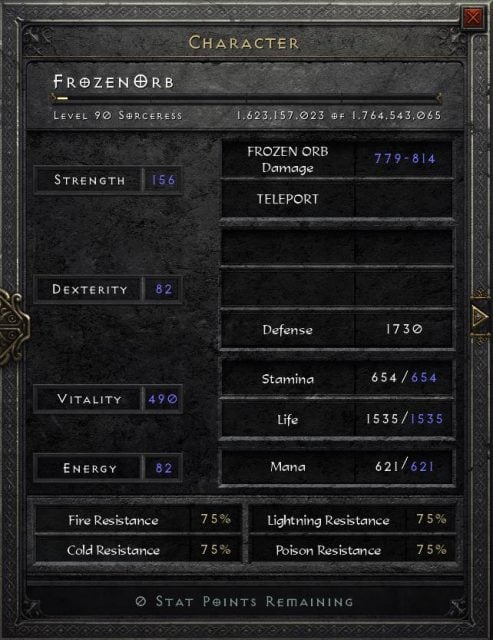 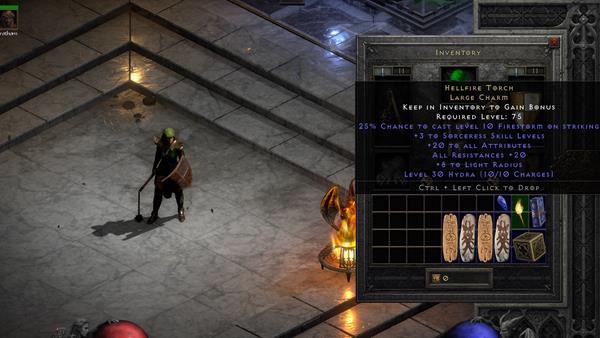 The Frozen Orb Sorceress focuses on the Cold Tree, but you’ll also be spending many points in the Lightning Tree to be able to deal with Cold Immune enemies. You’ll use the following Skills when playing this Diablo 2 Resurrected Sorceress Build:

This spell creates a floating orb that fires Ice Bolts at all directions while moving forward. Enemies can get hit by multiple Ice Bolts from the same Frozen Orb, making it great for both individual targets and groups of enemies. It’s important to notice that the damage displayed on the spell corresponds to each Ice Bolt, which can be misleading when you compare it to other spells, and Frozen Orb has a 1 second cooldown between casts, so make sure to correctly aim each to maximize efficiency.

This skill greatly reduce enemy’s cold resistance, greatly increasing the damage of your Frozen Orb. Resistances can’t drop below -100%, so there’s a cap to how much you can increase your damage with Cold Mastery. For this reason I only recommend that you assign 15 points, as you’ll be getting a lot of +Skills from your equipment at which point you’ll max out efficiency. It’s also important to mention that Cold Mastery won’t affect Cold Immune enemies.

This Skill passively increases your mana regeneration which is great for any Sorceress build. Assigning only 1 point here is enough, as you’ll be boosting it with your equipment as well, and you will need to spend Skill Points in other places.

Since Frozen Orb will deal 0 damage to immune enemies, you’ll need an alternative to get rid of them. Chain Lightning creates a bolt of lightning that arcs through enemies that are close to each other, allowing you to deal with all immune enemies at the same time. The damage fluctuates a lot, so you might need to use the spell many times if you get unlucky with the damage.

This skill passively increases your Lightning Damage, and it’s the best way to increase the effectiveness of Chain Lightning. You’ll be spending a ton of points here to increase the damage, so don’t be shy.

This skill reduces the current health of all enemies around you by 25% ignoring all types of Resistances. Since it takes into account enemies’ current health, you can cast it repeated times to drop enemy health to a very low percentage very fast. This is especially useful against Bosses and Cold Immune enemies. It’s important to note that it can’t take monster’s health below 33% during Nightmare Difficulty and 50% during Hell Difficulty, but even taking half health bar from a boss with only a couple of casts is very strong and a must have for all Sorceresses

Since this guide is starting at Lvl 40, you’ll want to first focus on your Frozen Orb, Ice Bolt and Cold Mastery, and then work towards Chain Lightning to deal with immunes. You should have around 43 skill points at lvl 40 (39 from levels, and 4 from Quests). You should have your Skills placed in the following manner: 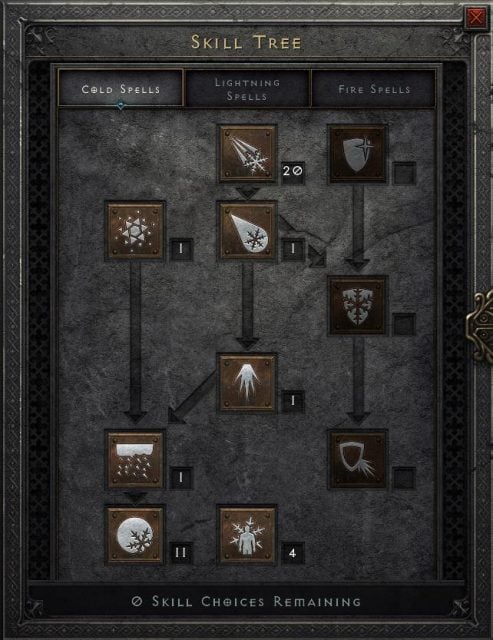 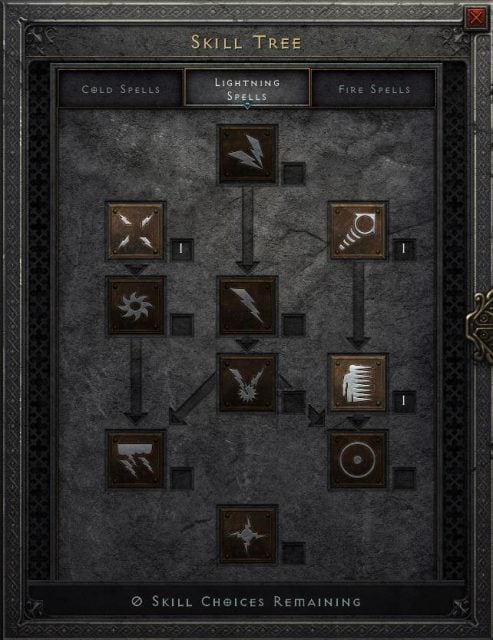 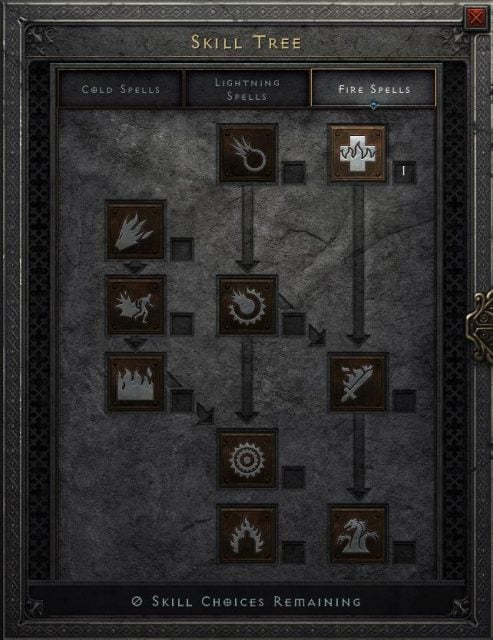 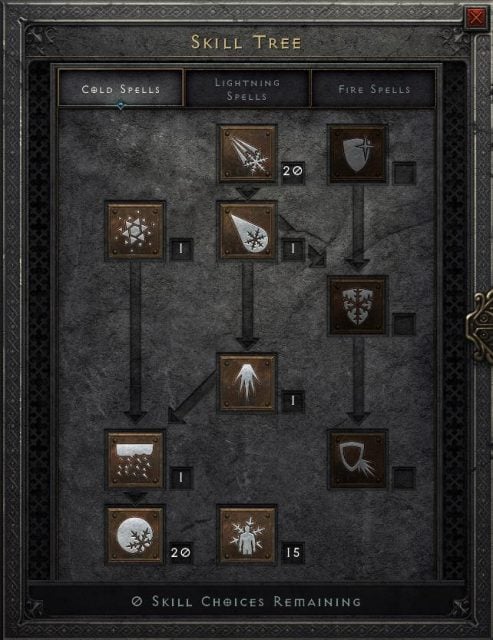 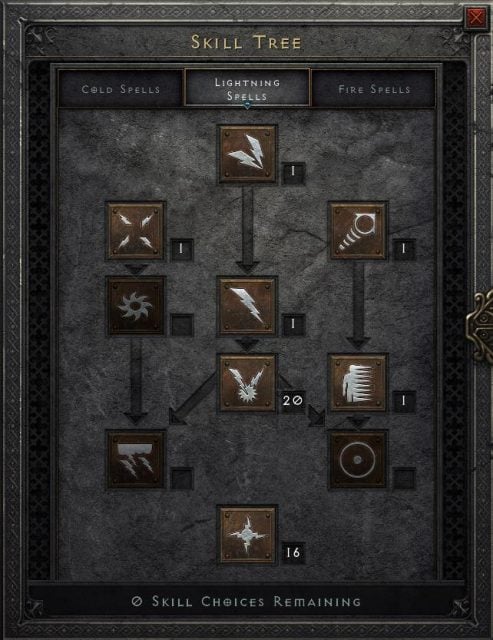 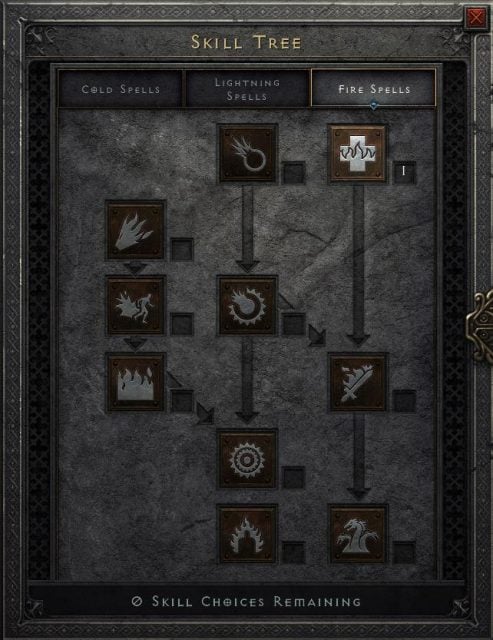 When it comes to equipment you’ll first want to get as much as +Skills as possible, as it’s the best way to increase your damage. You’ll also want to search for Faster Cast Rand and max out resistances. Once all of that is covered, you might want to look into Magic Find gear to increase your loot quality.

For the belt you’ll want something with Life and Resistances. Tal Rasha’s Fine-Spun Cloth can also work great if you find more pieces of the set.

You’ll want to search for rings that life, stats and resistances as well as Faster Cast Rate.

Try to find an amulet that provides +Sorce Skills or +Sorc Cold skills. Other than that, you’ll want to search for Stats, Health and resistances. Tal Rasha’s Adjudication is a great option as well.

For charm’s you’ll mainly want to look for +Life, +Mana and +Cold Skills or +Lightning Skills

Tal Rasha’s Wrappings Set is a great option to use early on if you manage to get a couple of pieces.

Harlequin Crest (Unique): This helmet provide +2 to all skill as well as Life, Mana and attributes. You can insert a Gem or Rune of your liking by adding a socket to it.

Heart of the Oak (Runeword) – This weapon provides +3 to all skills as well as +All Resistances and Faster Cast Rate. You’ll also be able to cast a lvl 4 Oak Sage that will greatly increase your minion’s health.

Spirit (Runeword) This shield provides +2 to all skills and +25-35% FCR. It also provides many defensive stats such as Elemental Resistances, Faster Hit Recovery and Vitality.

If you are having trouble finding a 4 slot shield, just find a Monarch Shield and take it to Larzuk after completing the Siege on Harrogath quest.

Call To Arms (Runeword) + Spirit Shield (Runeword) – The Call to Arms Runeword provides you with the Battle Command and Battle Order shouts which are great buffs. Battle Command increases your Skill Level, allowing you to summon stronger minions, and the Battle Order increases your parties life, mana and stamina, making your minions even stronger. 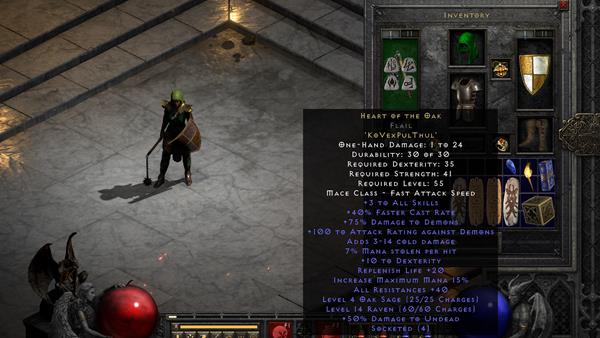 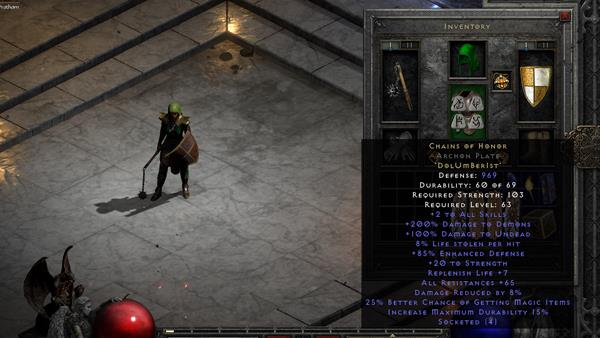 Magefist (Unique): These gloves provide you with Faster Cast Rate. They also have a good amount of defense and increase your mana regeneration.

Arachnid Mesh (Unique): This belt provides +1 to all skills as well as providing +Faster Cast Rate and increasing your maximum mana.

Sandstorm: These boots provide +20% Faster Hit Recovery, Strength and Vitality. The FHR will avoid to get Stun-lock by most enemies.

War Traveler (Unique): These boots provide +25%FasterRunWalk, Strength and increase your Magic Find by a massive 30-50%. 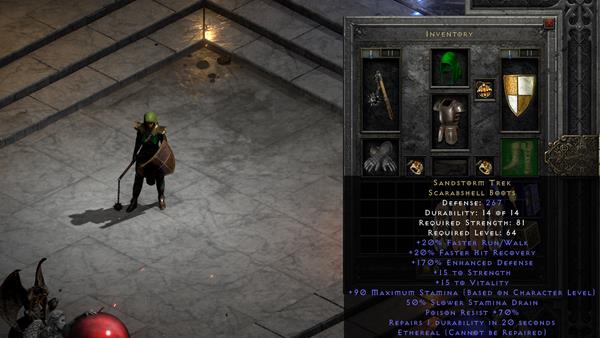 Here you have two different options, both providing +Skills: 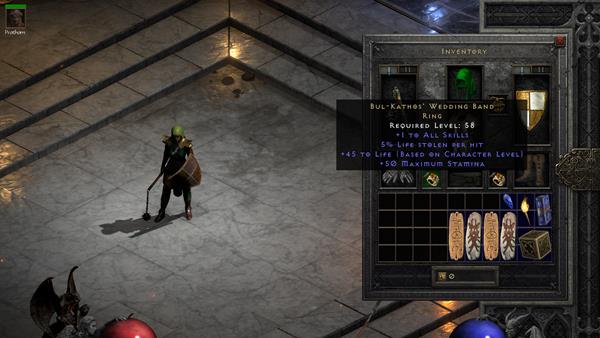 More Mana: 2x Stone of Jordan to increase your mana.

Mara’s Kaleidoscope: This amulet provide +2 to all skills as well as +20-30 to all resistances and +5 to all attributes. 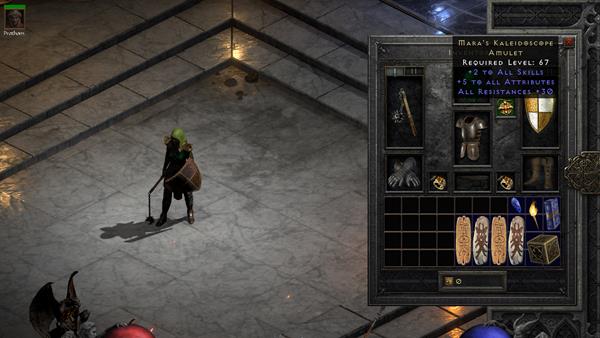 Crafted Amulet: You can search for a crafted amulet with +Skills and FCR, Stats, Life or Resistances.

For charm’s you’ll mainly want to look for +Life, +Mana and +Cold Skills or +Lightning Skills 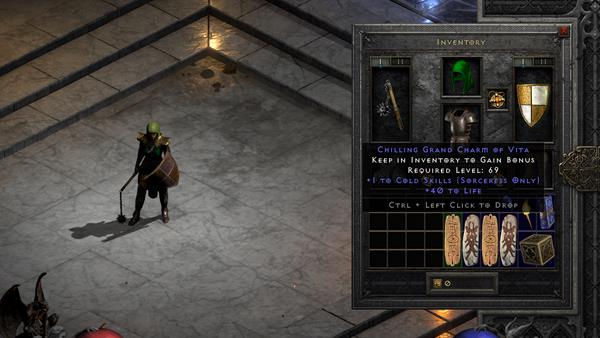 You’ll want to get the Act 2 Holy Freeze Mercenary for this build. The Holy Freeze is great for dealing with large crowds of enemies.

When it comes to equipment, you’ll want to get an Infinty Runeword for the weapon, a Fortitude Runeword for the Armor and Andarie’s Visage for the helmet. The Infinity Runeword Reduces enemy’s lightning resistances, allowing you to easily get rid of Cold Immunes. 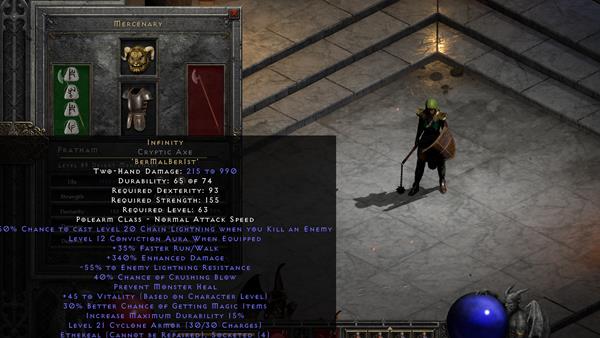 Try to aim the Frozen Orb directly into your enemies. Ice bolts come out from the orb, so if they touch an enemy it will get hit by all outgoing projectiles

Remember that Static Field can be used on regular monsters as well. If you are dealing with many Cold Immunes and haven’t unlocked Chain Lightning yet you can use Static Field to lower their health and let your mercenary finish the job

Even if you are restricted by a 1 second cooldown, having an increased FCR will allow you to teleport much quicker through the map and to kite enemies more effectively 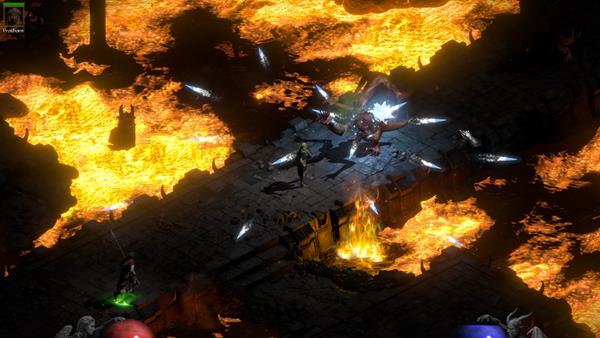