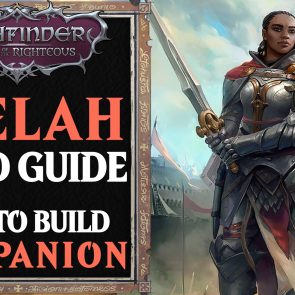 In this Seelah Pathfinder: Wrath of the Righteous Companion Build Guide, I’m going to break down the best Attributes, Skills, Feats, Spells, Mythic Path, and Equipment you should select to improve Seelah’s tank capabilities. Instead of multiclassing, I’ll focus on enhancing her Paladin Class, which is optimized to survive massive amounts of damage. If you’re looking for an effective and simple Build that allows you to go toe-to-toe with enemies, then this Seelah Build Guide is for you. 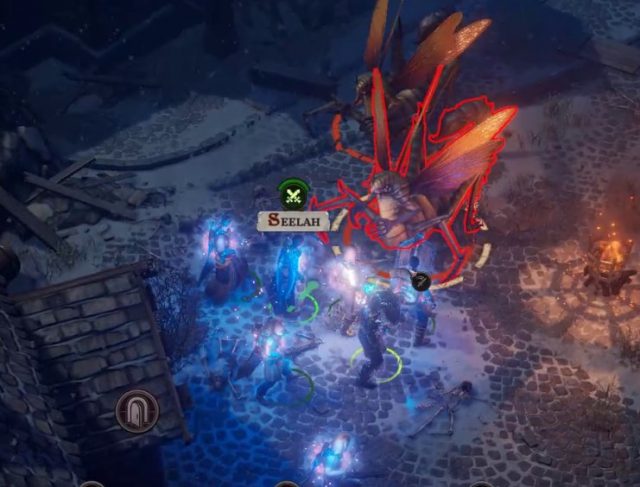 Seelah’s Build relies on boosting her Armor Class (AC) and Saving Throws through Equipment and buffs to make it difficult for enemies to attack her. This makes her a very effective tank who is almost impossible to hit. Note that the damage she deals won’t be as potent, but it shouldn’t be an issue since there are others who can easily fulfill this role. 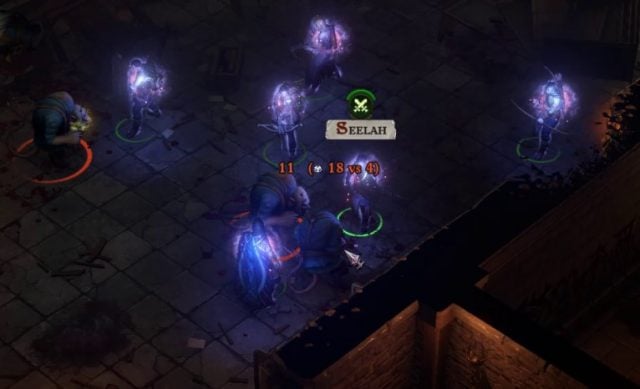 Smite Evil has a lot of benefits. For instance, Seelah’s Charisma Bonus is added to her Attack Rolls to increase the chances of hitting the target, while her Paladin Level is added to Damage Rolls against the same creature. 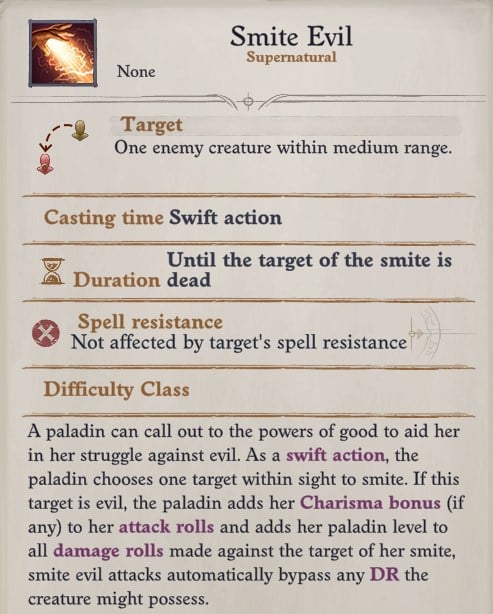 Moreover, she’s more protected against the attacks initiated by the target because of the Deflection Bonus she gains. This is equal to Seelah’s high Charisma Modifier and it’s added to her AC. Lastly, Smite Evil bypasses the enemy’s Damage Reduction (DR), allowing you to effectively deal 100% damage.

If you target an enemy that isn’t Evil, you won’t be getting any of these benefits.

Starting at Level 4 and then after every four levels, you’ll be able to add 1 point to any of your Attributes. Overall, Seelah doesn’t have a very good Attribute Spread, which is why we’ll have to raise most of them by adding points and equipping gear. First, you’ll want to increase Charisma by 3 at Levels 4, 8 and 12 to raise your Charisma Modifier to +4. This is the Paladin’s Spellcasting Ability Modifier, which determines the effectiveness of essential Abilities like Smite Evil and Lay on Hands to heal yourself and others. Since you’ll wear the Headband of Mental Flow +2, you’ll reach 20 Charisma with a +5 modifier. 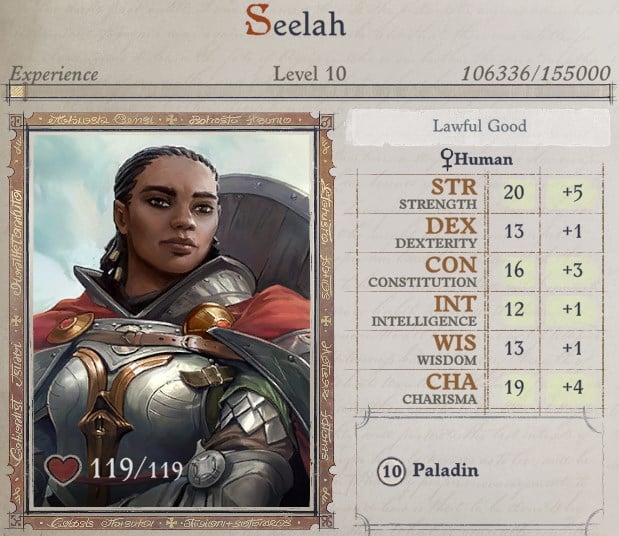 Second is Dexterity, which starts at 13, because it measures how well you’re able to keep your balance while evading attacks. This provides you with a +1 Dexterity Modifier that’s accounted for when Seelah equips Heavy Armor. However, you’ll want to equip the Heavy Armor Carapace in order to add more than 1 Dexterity Modifier to your AC. So at Level 16, you’ll allocate 1 point into this Attribute to reach 14 Dexterity with a +2 modifier.

By the time you hit Level 20, you need to reach 13 Intelligence to acquire the Combat Expertise Feat. You can do this by investing your final Attribute point into Intelligence while having the Headband of Mental Flow +2 equipped.

Combat Expertise provides you with +1 Dodge Bonus to increase your AC. It does have some drawbacks such as incurred penalties on Attack Rolls and Combat Maneuver Checks (CMC) but the benefits outweigh the disadvantages. Specifically, this bonus type increases starting at +4 Base Attack Bonus (BAB). Remember that Dodge Bonuses stack with one another so you’ll be able to effectively boost your AC without wasting any Bonus. 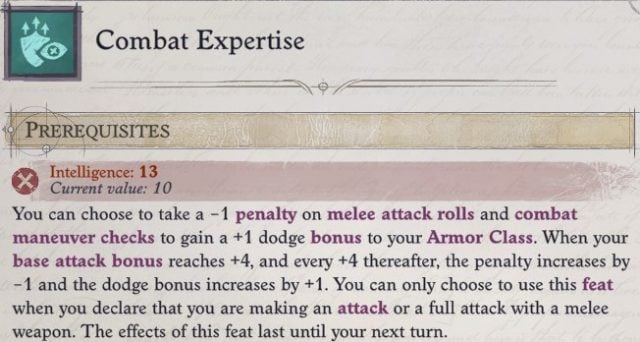 Since you’re no longer able to increase your Constitution Modifier to raise your HP nor Strength to improve your Melee Attacks, Melee Damage, and encumbrance, you can wear an Accessory to boost either of them.

In terms of Seelah’s Skills, you’ll want to focus on Mobility, Persuasion and Use Magic Device. With only 3 ranks in Mobility, you’re able to gain an additional +3 Dodge Bonus to AC via the Fighting Defensively Ability. Although you’ll receive Attack Rolls and CMC penalties again, you’ll survive much longer in Combat so remember to activate this before the beginning of an encounter. 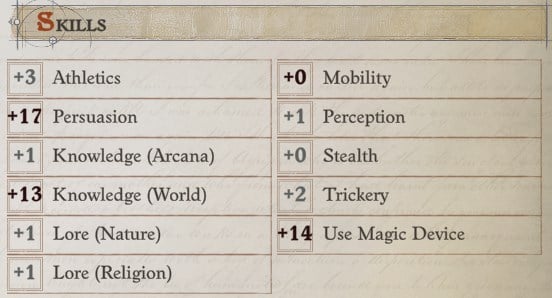 Due to your high Charisma, allocating points into Persuasion is a good deal. With this Skill, you’re able to persuade, negotiate and intimidate NPCs to get what you want while gaining extra XP.

Lastly, you can opt to add points into Use Magic Device. This allows you to activate Wands and Scrolls to cast Spells as if they were already a part of your Paladin Spell List. One example is the Scroll of Inflict Critical Wounds where it’s damage isn’t reduced by the enemy’s Spell Resistance plus, you’re able to use the scroll up close.

From Levels 3 to 20, you’ll be able to choose 9 Feats for your Paladin with 1 Feat at every other level. With Seelah, the idea is to enhance her AC and Saving Throws as much as possible in order to improve her durability. At the same time, she’ll also heal and buff the party. 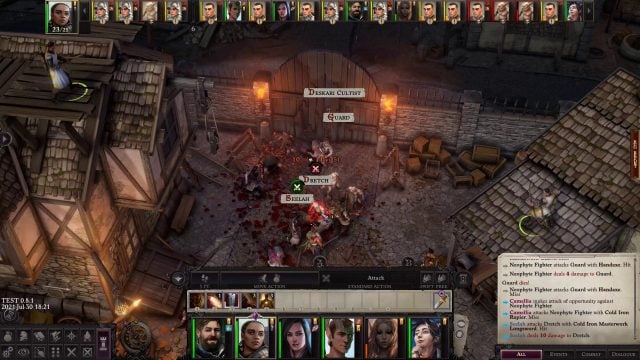 Lastly, it’s important to consider the decent damage she’ll be dealing, although it’s not as high compared to a Barbarian or Fighter, it should be sufficient to inflict killing blows against some enemies.

Alternatively, you can try and take other Feats in the order you prefer:

As a Paladin, although you’ll mostly focus on your Martial Abilities, you’ll still have to utilize some Spells to support your party. The first Spell to prepare and cast before engaging in combat is Bless, and this is if you don’t have a Shaman or Cleric with you. It provides the entire party with +1 Morale Bonus on Attack Rolls and Saving Throws against Fear. 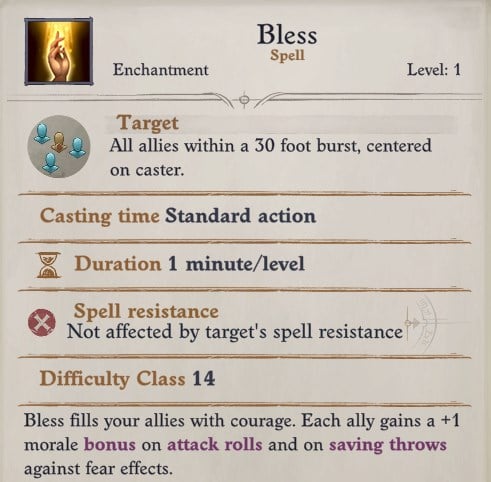 At higher levels, you can opt to cast Prayer to gain Luck Bonuses on Attack Rolls, Damage Rolls, and Saves. What’s more is you inflict a disadvantage against enemies who are penalized for those same rolls.

If you wish to enhance your or an ally’s Weapon, you can cast Bless or Magic Weapon. With Bless Weapon, your main goal is to change the alignment of your Weapon in order to bypass the DR of your target. This is effective until you reach Level 14 because that’s when you gain access to Aura of Faith, which automatically converts your Weapon into good-aligned. Meanwhile, Magic Weapon is useful for those who aren’t wielding Masterwork Weapons since they’ll receive an Enhancement Bonus on both of their Attack and Damage Rolls. 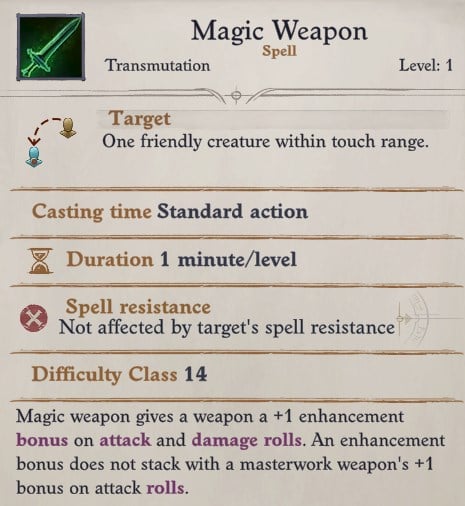 Since you’ll be encountering a lot of Evil creatures, Challenge Evil and Protection from Chaos/Evil are must-have Spells. With Challenge Evil, you provoke your target into attacking you, otherwise, it receives the Sickened condition. Every time you attack them, you receive a +2 Sacred Bonus. On the other hand, Protection from Chaos/Evil provides you with Deflection and Resistance Bonuses to AC and Saves, respectively, against Chaotic or Evil creatures. This is beneficial at earlier levels if you don’t have the gear to provide these bonuses just yet.

The other important Spells you should consider include:

For Mythic Feats, it’s important to get Shield Focus (Mythic) and Dodge (Mythic) to improve your Touch AC and AC, respectively, while boosting all Saving Throws by 1 with Mythic Resolve. If you’ve chosen Selective Channeling, then Mythic Channeling should make Channel Positive Energy much more potent by adding 2x of your Charisma Bonus.

Next, you can pick the Mythic versions of Lightning Reflexes or Iron Will if you want to enhance its respective Saving Throws. Alternatively, Destructive Shockwave is a decent choice to still deal damage based on your Strength Bonus even if your Melee Attack misses. Lastly, Weapon Focus (Longsword) doubles your Attack Roll Bonuses to improve your hits.

Due to Seelah’s high Strength, she’s able to equip heavier Equipment for survivability. As such, you’ll want to wear Heavy Armor – Full Plate like Carapace to gain the highest AC. This Armor is a good choice because it forces an enemy to succeed in their Reflex Saving Throw, otherwise, their Strength will be damaged. 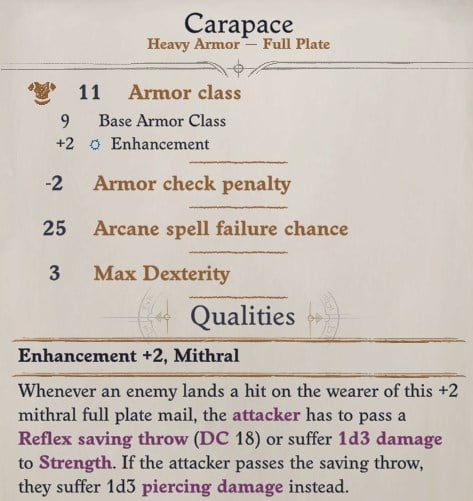 To further increase AC, you can equip the Dawn of Life Tower Shield if you’ve become proficient with it or the Heavy Shield of Innate Trust. For Weapons, the Longsword +2 is able to deal decent damage.

When it comes to Accessories, the Ring of Protection +3 and Amulet of Natural Armor +2 provide you with Deflection and Natural Armor Enhancement Bonuses to AC. Meanwhile, Oppressor’s Gloves reduces your enemy’s Saving Throws against mind-affecting conditions like Confusion if you were to critically hit them. Cloak of Resistance +2 is another must-have gear because it grants you with +2 Resistance Bonus on all Saving Throws.

Lastly, you’ll want to get ahold of the Headband of Mental Flow +2 to enhance Intelligence and Charisma as well as the Belt of Physical Might +2 to improve Strength and Constitution.

Seelah is an effective Paladin Tank who is able to aggro and withstand the damage inflicted by enemies. There are other useful Abilities that enhance her effectiveness such as Lay on Hands, which gets better the higher her level is. Aside from healing, you can also use this against Undead creatures to damage them. 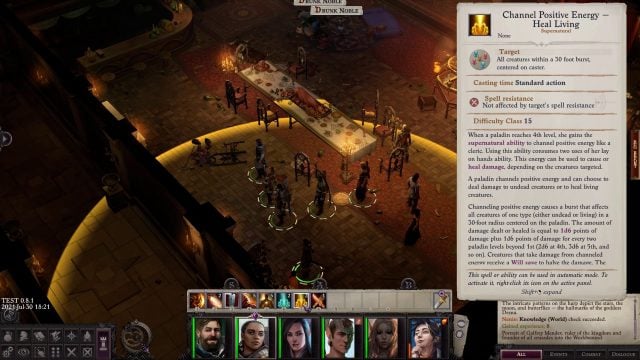 There’s also Divine Weapon Bond to enhance your Longsword by changing its alignment or damage type.

As a Paladin, you also get the Mercy Ability, which lets you cure allies who are afflicted with certain conditions. The best Mercy to obtain at earlier levels  is Fatigued. Oftentimes your entire party feels fatigue after more than a day’s worth of adventuring without setting up Camp.

In terms of Feats, you’ll want to balance the penalties that reduce the success rate of your Attack Rolls. This is the reason why I didn’t take Power Attack. Also, make sure to take Teamwork Feats if you have allies focused on dealing Melee Damage like Fighters. They’ll most likely possess the same Feats, which will help in enhancing both of your capabilities.

If other characters are being constantly hit with fear, charm or spell-like abilities, then staying relatively close to Seelah provides them with Saving Throw Bonuses against these negative effects thanks to her Aura of Courage and Aura of Resolve Abilities.

Lastly, remember that the similar bonuses besides Dodge aren’t cumulative. For instance, wearing two Rings of Protection won’t double your Deflection Bonuses to AC. You’ll be able to see a warning on non-stacking bonuses in your Equipment section. 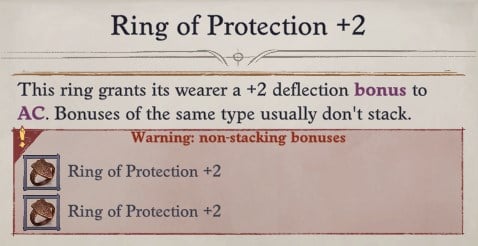 Stay tuned for more of these Companion Build Guides and be sure to check our Twitch Channel or the Pathfinder: Wrath of the Righteous Wiki if you have questions on the game! What did you think of this guide? Who are the Companions you’ll bring in your first playthrough? Let us know in the comments below!