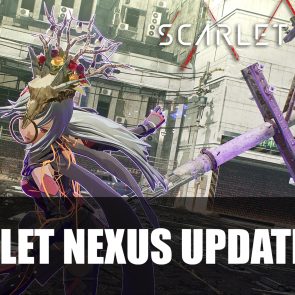 Bandai Namco have released a new trailer for the cross-generation JRPG Scarlet Nexus.

A new trailer has been released focusing on Scarlet Nexus‘ latest update 1.03. The update introduces a larger font size, new camera, targeting and lock-on options. With the camera you can now adjust camera distancing, with choices of close, normal and far. You can also skip animations when activating SAS.

In a recent post on the Steam page for Scarlet Nexus, Bandai revealed that new paid DLCs and free updates are underway. The additional paid DLC packs will include external creator-designed orignal costumes, sets, weapon sets and also bond system extensions. There will also be further new content coming with free updates in the near future.

In case you missed it, Scarlet Nexus is described as a “brain punk” action role-playing game that features a dual narrative that follows two protagonists Yuito Sumeragi and Kasane Randall, who both have psionic powers to fight off the Others. Scarlet Nexus promises fast-paced combat, with an anime art style aesthetic, not too dissimilar to that of Code Vein.