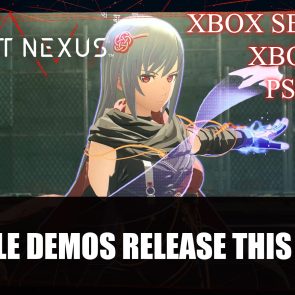 Upcoming Action-RPG Scarlet Nexus will be getting a demo on consoles later this month ahead of its release in June.

The Action-RPG developed by Bandai Namco, Scarlet Nexus will be getting a demo on consoles this month. The first to gain the demo will be Xbox Series X|S and Xbox One on May 21st, which will be followed by Playstation 4 and Playstation 5 on May 28th. There is no news yet of whether a PC version will be released.

Are you ready, OSF Cadets? Prepare to take the lead and fight the Others when the #SCARLETNEXUS demo arrives.

Scarlet Nexus is described as a “brain punk” action role-playing game that features a dual narrative that follows two protagonists Yuito Sumeragi and Kasane Randall, who both have psionic powers to fight off the Others. Scarlet Nexus promises fast-paced combat, with an anime art style aesthetic, not too dissimilar to that of Code Vein.

Scarlet Nexus will also be getting its own anime which will launch on July 1st , you can check out a trailer for it below:

In case you missed it, Bandai released a number of screenshots last month featuring costumes, the Brain Map, powers and more.

Scarlet Nexus will release on June 25th on PC via Steam, Playstation 4, Playstation 5, Xbox One and Xbox Series X|S.

For more news be sure to check out next New World Gets A New Trailer Featuring Amrine Excavation Dungeon and Baldur’s Gate: Dark Alliance 2 Re-Release “On The Table”.