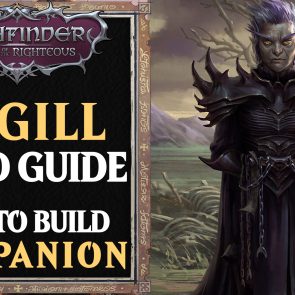 Regill Build Pathfinder Wrath of the Righteous Guide – In this Regill Build Guide, I’m going to break down the Attributes, Skills, Feats, Weapon Training, Mythic Path, and Equipment you should choose in order to utilize Regill’s multiclassed Build. Rather than pursuing the Hellknight path, we’re going to level up his Armiger Fighter Class to take advantage of the high volume of Feats he can take. If you’re looking for a way to intimidate enemies while effectively attacking them multiple times per turn, then this Regill Build Guide is for you!

Regill’s Armiger Hellknight Build seems counterintuitive at first glance. As an Armiger Fighter at Level 5, he has the Weapon Focus and Weapon Specialization Feats for his Gnome Hooked Hammer, which is a Double Weapon. Double Weapon functions like you’re fighting with two Weapons using your Main Hand and Offhand. As such, Regill incurs all of the Two-Weapon Fighting penalties as well as the Feats related to it. We’re going to maximize these to execute numerous attacks per turn while inflicting notable damage. 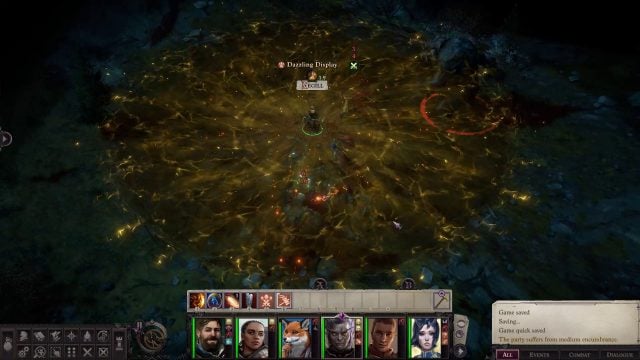 What makes Fighters versatile in Pathfinder Wrath of the Righteous is their proficiency with all Simple and Martial Weapons, Armor and Shields. Because of this, Regill can equip Heavy Armor to boost his Armor Class (AC) or how well he dodges attacks. However, the drawback with this Armor Type is it limits the Max Dexterity that can be added to his AC. With Armor Training, Regill’s Max Dexterity Bonus increases by +1 at Levels 3, 7, 11 and 15. We’re able to take full advantage of it since we’re going to level up his Armiger Fighter Archetype even more. 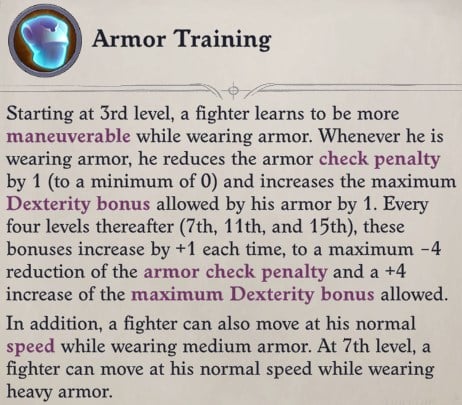 Furthermore, he has Weapon Finesse and Fighter’s Finesse Feats that allow him to use his Dexterity Modifier instead of the Strength Modifier on Attack Rolls when wielding the Gnome Hooked Hammer. This benefits him greatly since he has a high base Dexterity of 18.

Next, he gets the Order of the Godclaw Ability that provides all allies with a +1 Morale Bonus to AC, and Attack and Damage Rolls when they’re facing Chaotic Enemies, which are frequent in the game. The good thing about this bonus is it increases to +3 at Level 9. And finally, Regill is able to make use of Smite Chaos. Smite Chaos functions similar to Seelah’s Smite Evil Ability except that the targets should be of the Chaotic Alignment. 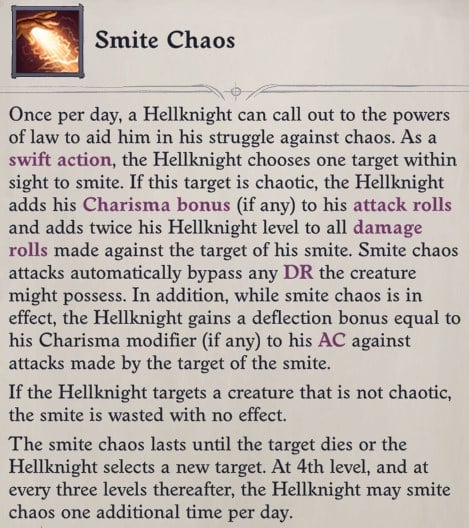 What it does is it improves his Attack and Damage Rolls while overcoming the enemy’s Damage Reduction (DR) so Regill can essentially inflict full damage. His Charisma Modifier is also added to his AC when he’s attacked by them.

Starting at Level 8 and after every four levels, you’ll be able to add 1 point to any of your Attributes. With Regill, you’ll only raise one Attribute. At Levels 8, 12, 16 and 20, you’ll be investing 1 point into Dexterity to increase its corresponding modifier to +6. 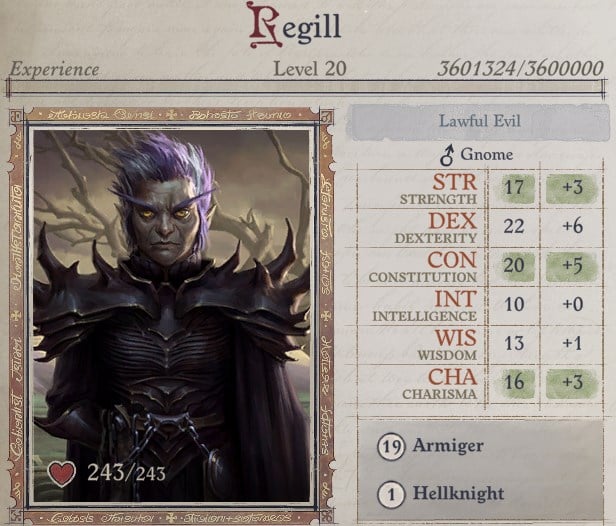 Dexterity doesn’t only influence our AC, Reflex Saves, and Attack Rolls, it also plays a significant part towards our Damage Rolls. Once you reach Mythic Rank 2, you should choose the Weapon Finesse (Mythic) in order to apply your Dexterity Modifier rather than the Strength Modifier on Damage Rolls, making you formidable in Combat.

When it comes to Skills, you’ll want to enhance Persuasion, Knowledge (Arcana), and Lore (Religion) due to the bonuses you already have with these. Persuasion, however, takes a more proactive role since it contributes to how successful your Intimidate Checks will be in encounters. Regill’s Build relies on successfully rolling Persuasion Checks to demoralize enemies with Dazzling Display and Dreadful Carnage Feats. In this state, they become extremely vulnerable to your attacks, which would eventually lead to their demise. 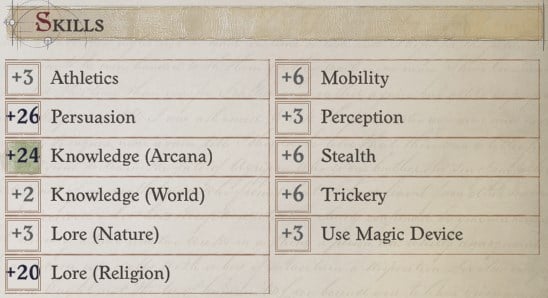 Knowledge (Arcana) helps you identify mysterious objects without the need to consult with NPCs. They may be useful to you or your party as some of them are actually rare Weapons and Armor. Meanwhile, Lore (Religion) provides you with added insight into a creature’s strengths and weaknesses, which you can use against them.

From Levels 7 to 19, you’ll be able to choose 7 Regular Feats and 6 Bonus Feats for Regill. You’ll focus on acquiring those that enhance your attacks and damage. 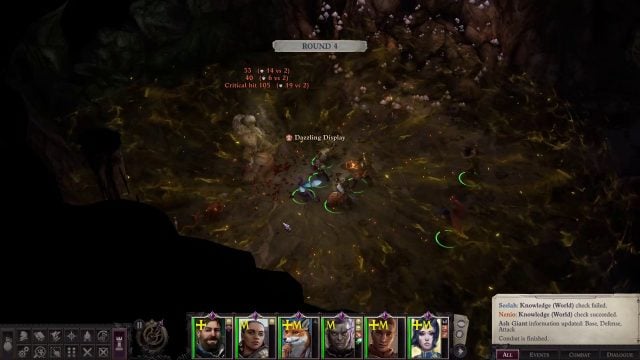 The idea behind these Feats is to first increase the number of attacks you can execute per turn, regardless of the Attack Roll penalties you incur. You’ll then have Dazzling Display and Shatter Defenses to weaken your target. With Dazzling Display, you inflict the Shaken Condition when you succeed in rolling for an Intimidate Check, which isn’t hard to pull off considering the boosts you’ve made to your Persuasion Skill.

Once shaken, their Attack Rolls and Saves, at the very least, are penalized. What makes this Feat shine is Shatter Defenses because it makes targets, who are demoralized as a result of Dazzling Display, flat-footed. Now a flat-footed character is denied of their Dexterity and Dodge Bonuses to AC. Not only will they be vulnerable to Sneak Attacks, but they’re also weak against regular attacks. Dazzling Display is a Full Action so make sure that you don’t move in the same turn in order to use it. 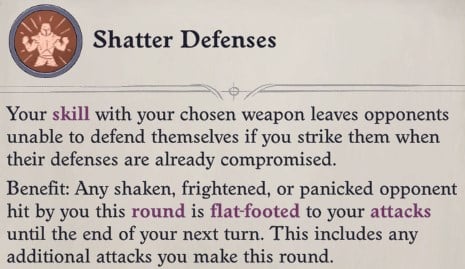 This brings us to our next essential Feat, which is Dreadful Carnage. Dreadful Carnage has a hefty set of prerequisites. You need to have Dazzling Display, Power Attack, 11 BAB, and 15 Strength. Since you don’t raise Strength by allocating Attribute points into it, you instead have to equip the Belt of Giant Strength, which you can buy from Wilcer Garms in Drezen. Once all of these requirements are met when you reach Level 15, you can take Dreadful Carnage. This Feat improves Dazzling Display since you no longer need to make a Full Action to intimidate enemies.

The moment you kill one of them, you automatically roll a Persuasion Check to demoralize the rest. You’ll only have to activate Dazzling Display once to trigger Shatter Defenses and Dreadful Carnage over and over again. This combo enables you to one-shot average and weak enemies. You can even combine it with Smite Chaos against Chaotic targets.

Since Regill still has many Feat slots, you’re able to improve your Attack and Damage Rolls via Greater Weapon Focus and Greater Weapon Specialization, together with the chances of landing Critical Hits, which are deadly. Additionally, I highly recommend taking Teamwork Feats like Outflank and Precise Strike for the effective collaboration of Regill with other melee characters in the party. Outflank significantly boosts your Attack Rolls as long as you and your ally are flanking the same creature. Also, it’ll most likely provoke an Attack of Opportunity from them when you execute a Critical Hit. 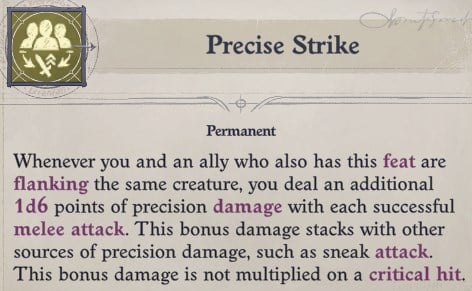 These two actions would more often than not kill the target. On the other hand, Precise Strike lets you and your ally deal additional 1d6 Precision Damage when you successfully attack the enemy. What’s more is if you have a Rogue, their Sneak Attack Damage stacks with it.

Instead of Spells, Fighters receive Weapon Training to primarily improve their Attack and Damage Rolls together with other capabilities. Here are the Abilities Regill should take in order: 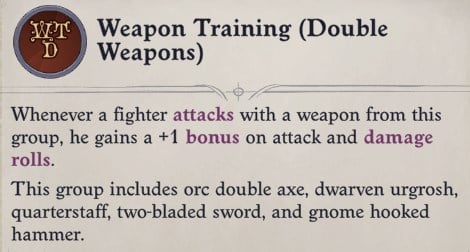 At Level 10, you should immediately choose Fighter’s Tactics. Fighter’s Tactics treats all of your allies as if they also have the Teamwork Feats you’ve taken. So for instance, even if none of them originally have Outflank, Regill still receives the Attack Roll Bonus as long as you both flank the same creature. Note that they won’t be granted this bonus unless they own the Feat. Meanwhile, Fighter’s Reflexes allows you to apply your Weapon Training Bonus to Reflex Saves, thereby boosting it sufficiently. You can then choose any Ability at Level 17.

Most of these are geared towards dealing extra damage and stacking bonuses to Attack and Damage Rolls. Additionally, Abundant Smite Chaos allows you to activate its respective Ability more than once per day while Last Stand renders you indestructible for two rounds when your HP is very low.

For Mythic Feats, you’re going to select the Mythic versions of:

It’s very important to choose Weapon Finesse first so you can take advantage of your high Dexterity Modifier for Damage Rolls right away. Similar to regular Feats, the other Mythic Feats enhance Attack and Damage Rolls, while reducing the Attack penalties you take in order to successfully hit enemies more often.

When it comes to Regill’s Build, you can retain his default Cold Iron Gnome Hooked Hammer +1 and Adamantine Full Plate +2 since these are both decent. You should then add standard Equipment to boost your defenses like the Cloak of Resistance, Ring of Protection, and Amulet of Natural Armor. 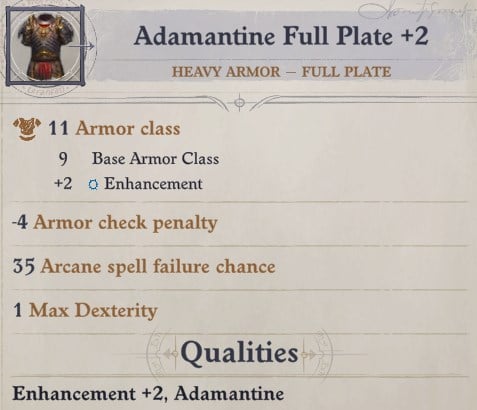 To improve Attributes like Charisma for Persuasion Checks and Smite Chaos, you’ll need the Headband of Alluring Charisma. Meanwhile, to raise Strength, you can select the Belt of Giant Strength as mentioned earlier or the Belt of Physical Might to also increase your max HP. You may also wield the Gloves of Dueling, which provides you with a +6 Combat Maneuver Defense (CMD) Bonus against being disarmed.

Regill’s Build can cause confusion at the start due to how his default Feats and Archetypes are set up. His Fighter Class doesn’t make it any easier because of the tons of Feats you have at your disposal. However, you’re able to navigate through this by building up his existing proficiency with the Gnome Hooked Hammer. Regill is a beast as a Martial-focused Character. He can easily one-shot some enemies thanks to his ability to intimidate them.

At Armiger Fighter Level 2, you gain access to Ardent, which replaces Bravery. Ardent grants you Will Save Bonuses for every four levels against Compulsion and Charm Effects. Examples of these include Command, Dominate, and Charm Whatever Spells. You remain firm instead of being swayed by what enemies want.

Remember to cast Cat’s Grace on Regill to improve his Dexterity even further. Alternatively, you can wear the Belt of Physical Form, which provides you with Enhancement Bonuses to Strength and Dexterity rather than raising your max HP. 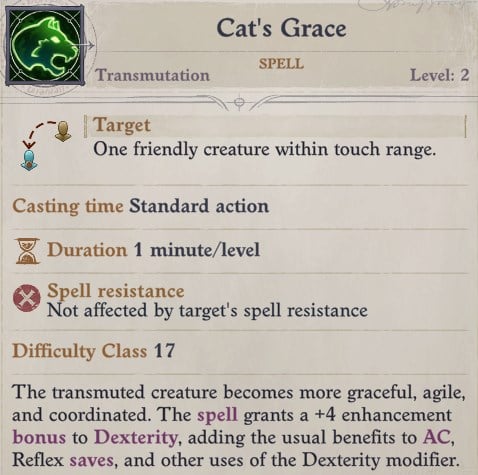 Lastly, if you don’t constantly proc Shatter Defenses and Dreadful Carnage towards the latter parts of the game, you can take the Skill Focus – Persuasion Feat because it provides you with a +6 bonus on all Intimidate Checks.