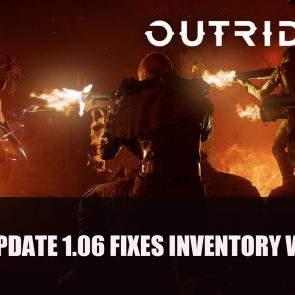 People Can Fly have dropped the latest patch 1.06 for Outriders which aims to fix the inventory wipe bug.

Outriders has been plagued by a bug that causes player’s inventory to wipe, developer People Can Fly have now released a patch hopefully ending that troublesome issue on platforms Steam, Epic, Xbox and Playstation.

The developer also noted that if you have been affected by this issue that the process to restore items is also underway, but separate from this patch. Rest assured People Can Fly says it’s their “highest priority”, while the patch aims to stop this from happening.

We have just released a new patch that addresses the bug that has been causing the inventories of certain players to be wiped.

It looks like the devs will be keeping a close eye on this issue as they monitor this over the course of the weekend. Once the patch has been deemed a success, they will start sharing when players can expect their disappearing inventory to return. As for whether you need to do anything to notify the developer the answer is no:

We can identify affected users via our backend analytics.

There is no need for you to take any action. You will still benefit from our future restoration plans. https://t.co/WCiOrusHrT

Players’ characters that run into the message “Couldn’t Connect to Server”, they will have their inventories returned in due course and will become playable again soon once the restoration process has been completed.

Previously People Can Fly rolled out an appreciation package for those who played Outriders from launch in order to thank players for sticking with the game despite the server issues that was experienced.

If you haven’t check out Outriders yet, it’s a co-op shooter RPG that takes players to the planet of Enoch as a “last chance”, where humanity plans to colonise after Earth becomes inhabitable. It offers four different classes to play which are Pyromancer, Trickster, Devastator, and Technomancer.  If you’re looking for some build guides to get your started check next Outriders Devastator Build Guide – Seismic Juggernaut.

Outriders is available on PC, PS5, Xbox Series X, Xbox One, PS4 and Stadia. Drop by our Outriders wiki for all the latest info.