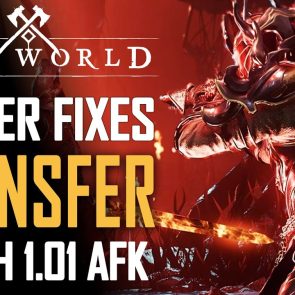 Amazon Game Studios has released patch notes for version 1.01 which go live once the maintenance is over for New World. The patch brings a number of fixes for AI performance, new fixes against AFK exploits and more.

The latest update 1.0.1 patch notes for New World which includes a number of fixes mainly focusing on character server transfer groundwork, War turret projectiles, AFK prevention to stop players from exploiting methods to stay logged in the game causing further queues and an update for world queues having a confirmation screen for when players attempt to leave queues for a world so they don’t accidentally leave without meaning to.

The patch also comes with a number fixes with a few focusing on AI such as Pastor Walsh spawning aggressively, also adjusting spawn rates for Bullrush Wash which will now spawn faster, Overseer Zana to respawn slower, and Master Zindt to elimate duplicated respawns. Other fixes include quests such as missing journal info and more.

Maintenance is now happening which started on October 6 at 3 am PT/6 am ET/10 am UTC/12 pm CEST and expected to last 4 hours.

You can check out the full patch notes below:

New World is now available on PC via Steam.