The post New World Leveling Guide: How to Level Up FAST as a Beginner appeared first on Fextralife. 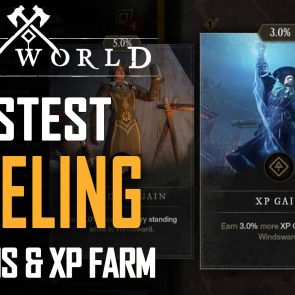 New World Leveling Guide on How to Level Up FAST as a Beginner. This Beginner’s Guide focuses on several tips in order to quickly level up your character as well as your primary and secondary Weapons. It involves engaging in specific Quests and how to deal with them, PvP, and Expeditions, to name a few. If you’re looking for a way to effectively gain enormous amounts of XP to participate in higher level content, then this Guide is for you! Make sure to check out our Beginner PvP Tips and Best Early Game Weapons & Accessories.

New World Leveling Guide: How to Level Up FAST as a Beginner

New World offers a ton of activities to power through your character and Weapon Mastery levels. It can get confusing especially when you’re a beginner in the massive world of Aeternum. Think of character level as your overall progression in the game whereas Weapon level grants access to Abilities and Skills to customize your Build.

Quests | How to Level Up Your Character and Weapons FAST

In New World, Main Story Quests are where the majority of your XP comes from and it’s definitely how you should begin to level up as a new player. However, purely completing them isn’t enough to productively boost your level. You’ll eventually hit a wall where the quest’s corresponding level recommendation is going to be higher than your own, say 3-4 levels greater.

This is a good indicator to switch to Side Quests so you can catch up. It goes without saying how risky the journey is to travel to a location containing monsters whose levels are substantially bigger than yours. Not only that but also, it’ll take a longer time to kill them, making the overall experience tough and unrewarding.

This brings us to Side Quests, which can be in the form of Side Stories, Faction Missions, and Town Projects. Side Stories are those you encounter in Settlements that are represented by yellow diamonds on your Map. They do provide a decent amount of XP but not when compared to Faction Missions and Town Projects. One thing to note about Main and Side Story Quests is the Azoth you receive upon completion. Azoth is used for fast traveling back to the different parts of your chosen territory whether it’s a settlement or fort. 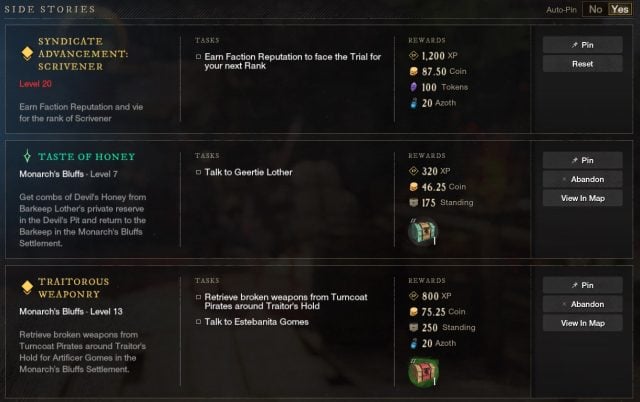 This saves you a lot of time when you’re about to turn in your quests rather than running back. Since you have no way to hasten your speed and there are no mounts in New World, fast traveling becomes highly essential to maximize your efficiency. Although you have the option to use “Recall to Inn” once you’ve registered in that specific inn, you can only use this sparingly, particularly, once every hour.

Next are Faction Missions. Faction Missions are unlocked once you pledge your allegiance to the Syndicate, Marauder or Covenant Faction. These missions are obtained from Faction Boards in respective territories. What’s great about them is you have the option to go for PvE and/or PvP related quests depending on your preference. I wouldn’t recommend taking PvP quests if your level is below 15 since this requires you to enable the PvP Flag. 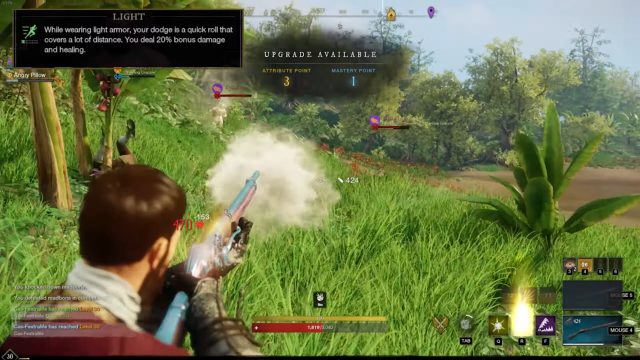 Doing so also makes you susceptible to damage from other players, which lowers your chances of surviving in early game. However, once your level is higher and you feel confident enough, then feel free to toggle this to fight against them and to gain extra XP along the way.

With PvE quests, on the other hand, you’ll notice that some of their Difficulty is categorized as solo or group. Between the two, Group Faction Missions provide more XP. Furthermore, you should also consider turning in at least 3 of these missions per day. The “Daily Bonuses Available” section on the upper center part of your screen means that when you complete 3 Faction Missions, the XP you gain would be double than what was indicated when you initially took them, giving you a huge boost. As such, I highly suggest taking the one with the highest XP available in order to take advantage of this bonus. 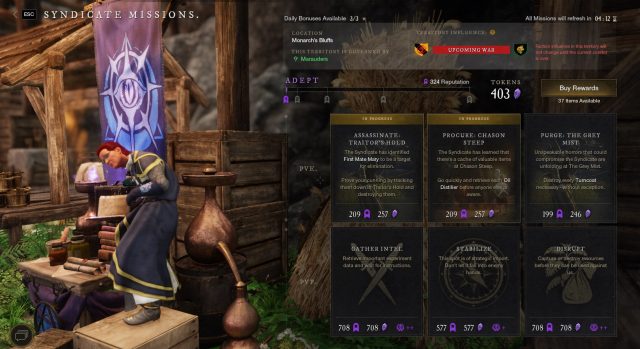 Town Projects still grant massive XP even if it was nerfed after the Beta. They continue to give around 300 to 1,000+ XP, which can increase to 3,000+ XP when your level is higher. You can accept up to 12 projects at a time from the Town Project Board so make sure to maximize the amount you take. These quests usually involve hunting animals, acquiring and delivering potions, and Crafting rations. If you have a hefty amount of gold, you can buy some of the materials or ingredients from the Trading Post to expedite its completion. But don’t make the mistake of only doing these projects because it gets too repetitive and boring after a while. 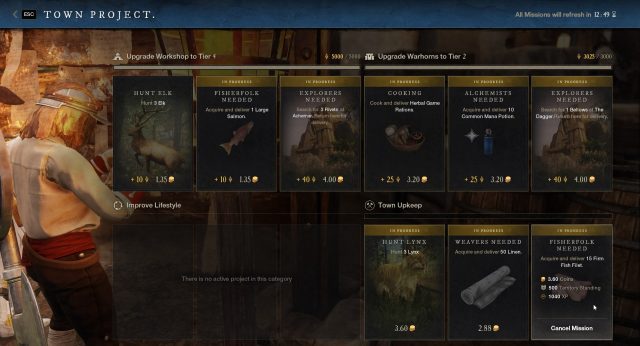 Secondary Activities | How to Level Up Your Character and Weapons FAST

After the tutorial, you’ll be assigned to beginner territories, namely, Monarch’s Bluffs, Windsward, First Light, or Everfall. As a new player, it’s best to focus on a single location in the meantime in order to invest Territory Standing Points into. These standings or rewards provide you with bonuses. For instance, you can own a house. You can even decrease your crafting fee to consume less materials. What you want to prioritize is the XP Gain. Although it seems like a small percentage, this will yield you notable XP since you’ll be doing a ton of quests in your starting territory. 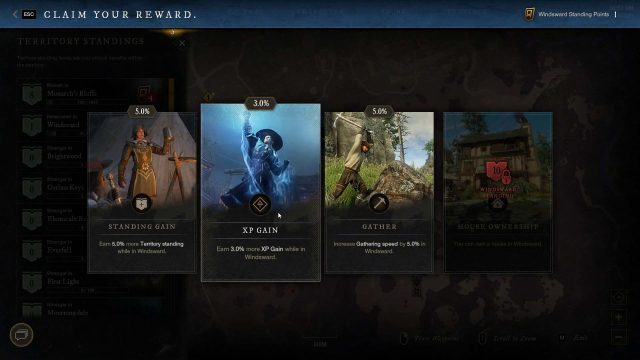 Gathering is one of the most important aspects of New World because they allow you to acquire materials for the creation of Equipment and Consumables, which you use for any type of activity. It is for this reason that you’ll also want to invest in Gathering Speed. Not only do you reduce the time by which you chop trees or mine ore, but you also gain some XP after performing these activities so don’t skimp on them especially when you discover new biomes. 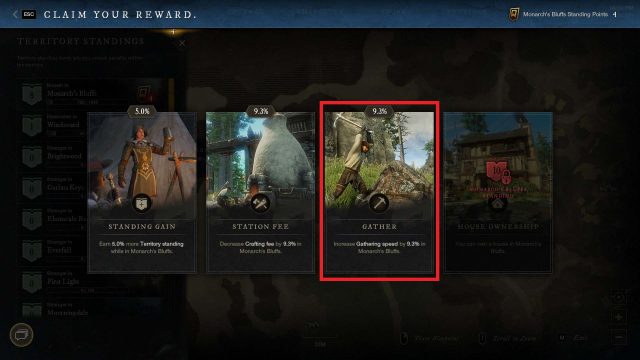 For example, if you intend to gather Iron Ore in Monarch’s Bluffs, then it’s better to upgrade your Gathering Speed in this territory since you’ll spend a lot of your time in its surrounding areas. In order to boost your speed by up to 120%, you have to level up your Gathering Skills and upgrade your Tools to Steel as soon as you can.

Next, while exploring towns and other parts of the map, you’ll notice these glowing blue pages lying around on top of tables or crates. These are documents that contain lore about New World. By simply clicking ‘Read’, you gain approximately 100 XP so remember to stop and acknowledge them from time to time.

Prior to logging out, make sure that you leave your character in a settlement. This is very important because while you’re not playing the game, you gain Rested XP Bonus. As such, you receive more XP depending on your downtime. You’re able to utilize this with any activity, regardless if it’s crafting or completing main quests, when you log back in. 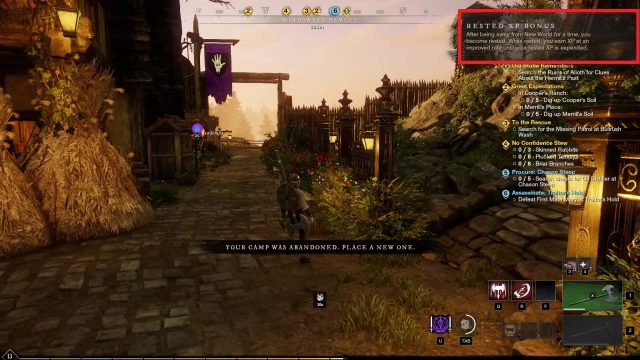 When you’re traveling, you’ll see Uncharted Landmarks as indicated by question marks on your map. If you’re near them, make sure to pass by just to discover these places even if you have no intention of staying because doing so grants you bonus XP. Additionally, if you see another player who is fighting against a monster, try to catch up to hit that same creature. Don’t worry, you won’t be robbing that player of their rewards so it’s an acceptable way to gain that extra character and Weapon Mastery XP as well. It goes without saying that playing with a friend also speeds up your leveling since you both receive double the XP. 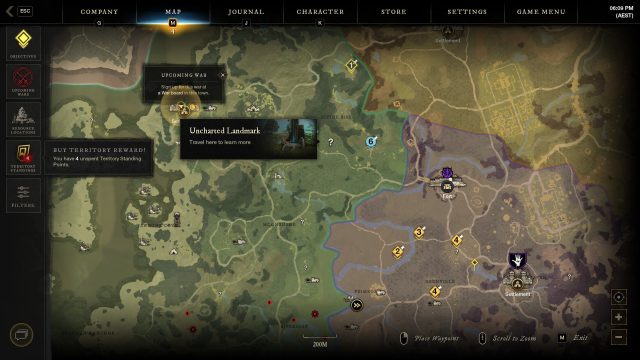 Expeditions | How to Level Up Your Character and Weapons FAST

When you hit Level 25, you can go to Windsward, specifically at the West Side of the Amrine Temple to gain access to the repeatable Amrine Excavation. This is the introductory Expedition or PvE Dungeon similar to raids in other MMORPGs. Before starting the dungeon, be sure to carry an Amrine Tuning Orb and Azoth Staff. The orb can be obtained for free when you start the Destiny Unearthed, Foreman’s Ledger, and Seeing Clearly Expeditions. You can also craft it at the Stonecutting Tier 2. Meanwhile, you’re able to acquire the staff upon completing the Forge Your Azoth Staff Main Quest. 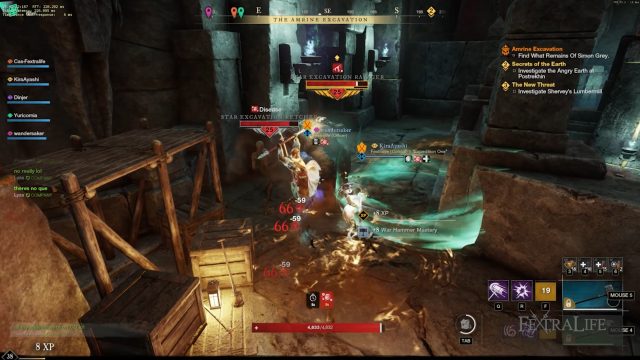 Now that we have the requirements covered, we’ll move onto the party composition. You’ll need to form a group with at least 1 Tank to lure enemies together so they don’t run amok, 2 Healers, and the rest can be DPS characters. What’s great about farming Amrine Excavation from Levels 25 to 30 is you get about 25,000+ XP per hour since you can finish this in about 20 minutes max. 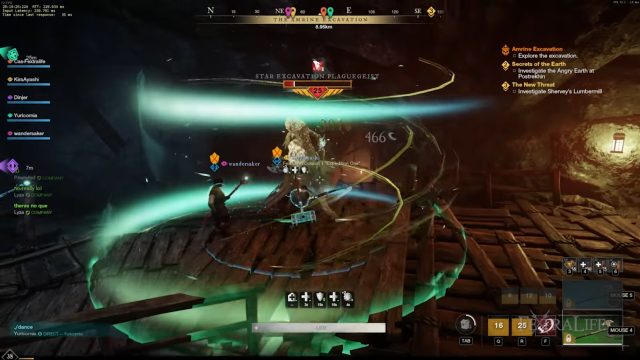 While running the excavation for the first time, you’ll need to consider that it gives you access to another repeatable quest called the Bones for Barkimedes Expedition. Everyone in your group has to make sure to hit the Ravagers to get the bones for this quest. When you reach Level 35, you can move on to the Starstone Barrows Expedition in Everfall but do note that this takes a longer time to complete than the Amrine Excavation so feel free to experiment which between the two dungeons you prefer the most. In addition to the great XP you receive from these activities, you also acquire rare gear in the process.

In New World, you can level up two Weapons at the same time by switching between them when you kill enemies. The higher your Weapon Mastery level is, the more Abilities and Skills you unlock in order to try out multiple Weapons in a shorter amount of time. The best way to do this is by engaging in Corrupted Breaches and Elite Area activities.

Corrupted Breaches are world events, which are represented by red skulls on your map, that you gain access to at Level 25, after completing the Forge Your Azoth Staff Quest. These skirmishes are either done solo or in a group, however, it’s much better to complete Corrupted Breaches with others in order to quickly farm them. 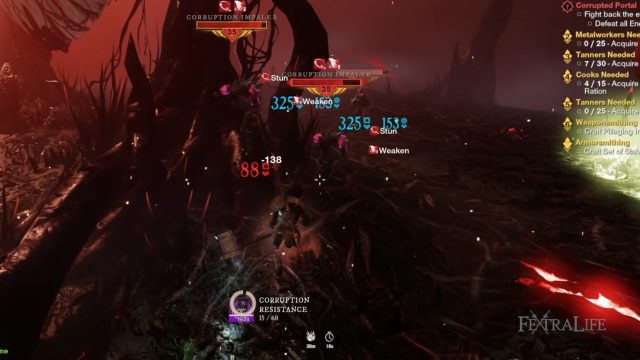 When it comes to Elite Areas, you ought to farm the popular Dead Man’s Cove, which is located in the Southwest portion of Monarch’s Bluffs. This is a densely-packed cove with a boss and mobs that you can keep clearing with at least four other people. What’s great about Elites is they not only boost your Weapon and character levels, but they also provide you with rare gear and extra resources. Note that you can keep farming this area from Levels 25 to 35. At higher levels, you’re able to visit and complete higher tiered Elite Areas like the Stone Skull Fort in Cutlass Keys.

Stay tuned for more New World Guides, and be sure to check out the New World Wiki for more information about the game! What other guides would you like to see next? How are you enjoying New World so far? Let us know in the comments section below.

The post New World Leveling Guide: How to Level Up FAST as a Beginner appeared first on Fextralife.