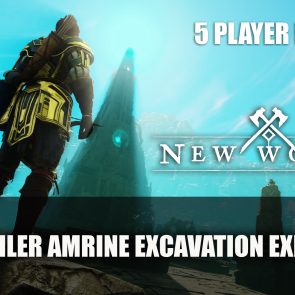 The newest trailer for New World previews the Amrine Excavation, featuring a five-player dungeon which is located in the notorious dig site, where a famous archaeologist and their crew were last seen. Players will go deep into the troubled area and find out what happened to the ancient technology that was unearthed. 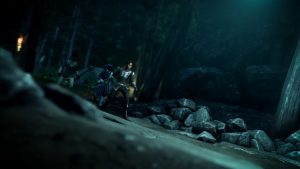 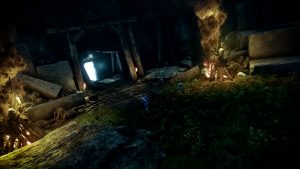 In case you missed it, Amazon Games shared a little about expeditions in March this year, explaining their vision for the five-player instanced dungeons. Each dungeon takes between three to five players to complete, encouraging players to group up together, and use “teamwork to overcome challenges”, this includes solving puzzles and defeating menacing beasts. There will be bosses, mechanics and loot to gain.

The developer has detailed players will need to be level 25 in order to enter the Amrine Excavation, meaning it is an “introductory experience” for those experiencing Expeditions for the first time. Mechanics of the puzzle’s difficulty as well as AI will be scaled accordingly.

You can check out the new trailer below showing the best of Aeternum:

The closed beta starts on July 20th, which will include the new Ebonscale Reach end-game zone, Expeditions, and 20v20 PvP battles in Outpost Rush.

New World is an Action-RPG all about the Age of Exploration, adding survival elements as players attempt to colonise Aeternum, a mysterious island. This MMO will have massive battles where up to 100 players can join, taking combat to the field. Join companies, build strongholds or go it alone in solo.

New World is shaping to have quite the range of content, and Expeditions could be a fun PvE activity to play with friends or online with random players.

New World will begin its closed beta on July 20th, and will launch on PC on August 31st. For more on New World be sure to check out our Everything About New World, Amazon’s Atypical MMORPG.

For more news find it here in Baldur’s Gate: Dark Alliance Will Release On PC Later This Year and Monster Hunter Rise And Resident Evil 3 Means Another Monster Year For Capcom.