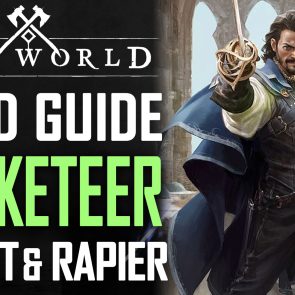 The way this Build works is that you’ll always open with your Musket setting the Burning status effect with the Powder Burn ability. This Skill not only deals slightly increased damage, but deals 20% Weapon Damage per second over 9 seconds. Enemies will take damage as they run at you from this Burn, allowing you to finish them off with a second shot or keep weakening them as they approach.

You can then use the Traps Skill to root the enemy in place, finishing it off with another shot or, attacking it with your Rapier if you want to conserve ammo. The general concept with this Build is that you want to fight at range as much as possible, only using your Rapier when absolutely necessary. You will use a ton of Ammo fighting this way, so I’ll also include in this guide how to make this, and where to find the necessary materials.

Both the Musket and Rapier scale with Dexterity and Intelligence, making them a fantastic pairing. Both Weapons scale primarily with Dexterity, so you’ll want to prioritize this Attribute when allocating Attribute points. Place all points into Dexterity when leveling up in order to maximize your per shot and attack damage, only placing points into Intelligence if Dexterity is maxed out. The more damage you deal per shot, the less shots you need to fire, saving ammo and time. 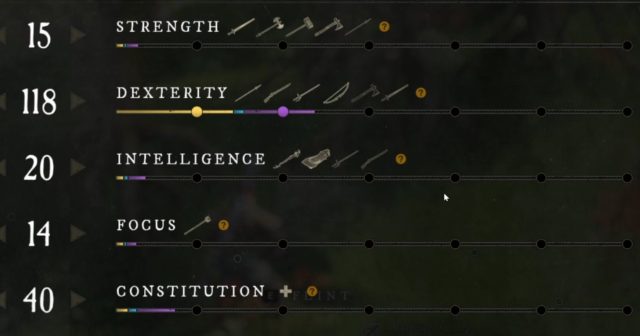 The Skills you’ll want for this Build vary a bit depending on the type of content you’ll be doing, so you may need to shift them slightly. Note that this Build is not very good for Expeditions, so I don’t recommend using it for that. This is because Expeditions have a high focus on AoE damage, and neither the Musket or Rapier are good at this. Additionally, they both deal the same type of damage (Thrust), and many Expedition enemies are resistant to this type of damage.

Powder Burn – This Skill is your opener to set a pretty strong DoT on the target that’s based on your Weapon’s damage. The better weapon you have, the more damage this will do. Not only does this deal damage as enemies approach you because of the DoT, it’s very very effective against players because when you hit them they usually panic heal, and then they will continue to take damage over time after they’ve healed. This is why I like this Skill, because if you hit them with Power Shot then they just panic heal up the damage, but Powder Burn ensures that you at least keep some of their health gone.

Shooters Stance – This Skill allows you to take a knee and fire off multiple shots with a much faster reload time. This is very good in instance when you are facing many enemies that are distracted by another target, or when one is charging you and you need to deal a lot of damage in a hurry. You won’t use it all the time, but it can be amazingly helpful when used right.

Traps – This Skill is useful more in PvE than PvP, but it’s good in both, and when it works it’s amazing. It traps an enemy in place, allowing you to get an easy shot on them, and is great against aggressive enemies and players alike. When you upgrade it, you can place 2 down at a time, making it twice as effective.

Tondo – This Skill is very very good in PvE and is a very effective AoE Skill that sets a bleed in a rather large frontal hit box. Use this when you pull more enemies than you should, and kite them around while they bleed and it comes back off cooldown. This Skill is not great in PvP for this Build, so swap it out if you plan to PvP for awhile.

Riposte – This Skill is absolutely amazing because it parries an attack, and stuns the enemy (or player), turning the tables on them. This can actually parry many attacks at the same time if multiple enemies (or players) attack into it at once, making it crazy effective in some cases. Use this against enemies who get in melee range first, and either counter attack after, or use the stun to get back out of melee range.

Fleche – This Skill is amazing for this Build. It allows you to dodge through enemies, getting behind them, or away from them as necessary, while damaging them at the same time. Use this to close the distance on players running away to get back in Musket range, or use it to get away from them if you are outnumbered. Dodge through the enemy, swap to your Musket and fire into them before they get back in melee range.

For passives you mainly just want to take anything that increases your overall damage, but one passive that you should rush early on is Tactical Reload. This passive allows you to reload when you dodge once every 6 seconds. This is super important, because often you need to dodge to avoid incoming attacks, and it will interrupt your reload forcing you to reload again. If you have this passive, you’ll reload anyway.

You’ll obviously need both a Rapier and Musket for this Build, using the ones the deal the most damage you can find. Make sure you look at the damage each weapon does, and not just the Gear Score.

When it comes to the Musket you’ll want to look for Muskets with Dexterity to help with damage, and other Perks that increase damage as a whole. There is one Perk that increases your Light Attack damage by about 8% or so, which really helps and you’d ideally want this as well. Crit Damage are also good since you can guarantee a Crit by hitting the head of the target. If you get a Gem slot you’ll want to socket it with an Onyx to increase the damage against full health targets. This can increase your first shot damage by as much as 30%!

When it comes to Rapiers, again Dexterity is ideal for increased damage, and increased Light and Heavy Attack damage as well. Crit Chance is also phenomenal, since you don’t always hit an enemy’s back, and you can’t aim for the head like with the Musket to get guaranteed Crits.

When figuring out what Armor you want to use with this Build, you’ll want either Light Armor for +20% increased damage, or Heavy Armor for maximum protection. I highly recommend using Light Armor when PvEing for maximum damage, and it’s also very good in PvP if you are a pretty good shot. But, if you’re just learning the Musket, Heavy Armor can help you survive much longer in PvP while you get the hang of this Build. The choice is yours and you may even want to have two sets of Armor, one heavy and one light.

You want to look for +Dexterity and +Intelligence on your Armor in order to get maximum damage with your shots. The easiest way to do this is to craft it, or buy it from the Trading Post, as dropped equipment come with random stats and bonuses. Crafting guarantees you can put this stat combination (if you have the right materials).

Craft the best ammo you can and make sure to use it. Steel Cartridges are usable at level 20, so swap to these when you get there. You can craft ammo if you mine some Salt Peter, which is usually found in caves with wolves or animals. Even one node of Salt Peter can be used to make enough Gun Powder to craft 500 Cartridges or more. Also, note that ammo weighs nothing while equipped on your person, but weighs a lot when in your inventory, so top up but don’t carry more than you need. 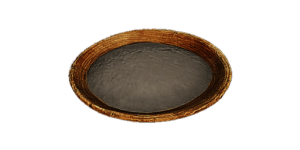 Always aim for the head when shooting if possible with the Musket, as this guarantees a Critical Hit. It’s much harder to do in PvP, but it’s easy to begin combat with a headshot while questing. This ensures maximum damage, and there are many passives that increase Headshot damage, so this will only get stronger over time.

Don’t rely on the Rapier as your primary means of attack. It’s fine to use to finish off enemies and players, but don’t charge towards enemies to get in melee range unless they are close to death and you can finish them quickly. You want enemies to come to you, and you want to range down any that you can.

This Build works very well in PvP, but is hard to use against heavily armored opponents.  When facing Heavy Armor players, try to keep your distance as much as possible and frustrate them with Traps and Fleche. Make sure to attack Light Armor ones when possible, and playing in even a small group improves the success rate of this Build a lot.