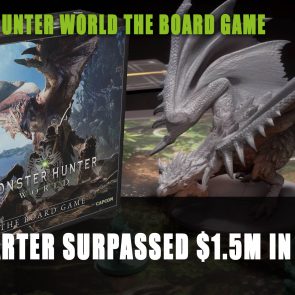 The Kickstarter for Monster Hunter World The Board Game surpasses $1.5 million in just one day after its launch.

The Kickstarter for Monster Hunter World board game hasn’t been out long and has already passed the $1.5 million mark. The board game takes the beloved Action-RPG and puts it into tabletop form. The game follows a choose-your-own-adventure quest book, complete with gathering resources, avoiding pitfalls and hunting down monsters with 1 to 4 players.

Monster Hunter World: The Board Game is now live on Kickstarter!

Back now and help get this off to a MONSTER start!

The tabletop was first announced last summer by Steamforged, designed as a strategy board game where players have a limited number of options when hunting a particular monster in certain locations. One particular monster included is the mighty Rathalos which gets its miniature piece represented on the board. Hunters will make their way towards the monster and try to deal damage, and gain bonus rewards depending on the monster parts they aim for. Resulting in rewards to help craft more weapons to hunt even more dangerous monsters that yield even higher returns. This strongly follows the Monster Hunter franchise main idea.

Those who back the project will be able to get an exclusive Great Sword miniature which is only available by backing the Kickstarter. Interestingly there are no stretch goals for this campaign, but daily log in bonuses adding to every Core and All-In Pledge for free. There are also add-ons which you can add to your backing.

The estimated delivery for the Monster Hunter World: The Board Game is September 2022. If you want to help support this project there are 8 more days to go.

A MONSTER total for a monster campaign, and a HUGE thanks to every single one of our incredible backers.