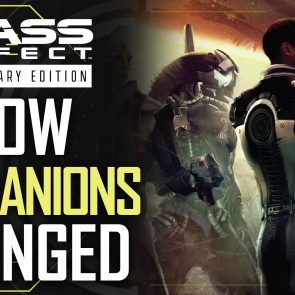 In this Mass Effect: Legendary Edition Companions & Romance Guide, I’m going to give you an overview of the major changes from one Mass Effect game to the next. Specifically, I’ll dive into how Companions work, how to Romance them, and what has changed over time. If you’re curious about how these vary in each Mass Effect game, then this Feature is for you.

In this feature, I’m going to talk about recruitable Companions. Companions or Squadmates in Mass Effect: Legendary Edition are essential in how you carry out your playstyle, unlike in other games where the assistance they offer is limited or they’re even considered a nuisance. To successfully defeat all of your enemies, you’ll need two Squadmates for every quest to balance the strengths of your entire Squad given that each of the 6 Classes have their fair share of weaknesses.

The rule of thumb when selecting the ones you’d like to bring with you in most of the quests is to identify the Skills you lack proficiency in. For example, if you’re a Soldier, you’ll need to bring Tech and Biotic Specialists who are in charge of debuffing and immobilizing enemies while you shoot them to their deaths. Meanwhile, if you’re an Engineer, you’ll need to bring Combat and Biotic Specialists who are masters in dealing firepower damage and Biotic Abilities to put crowd control measures into place. Note that Squadmates have a lesser number of Talents, Abilities and Powers in each of the three games as compared to Shepard. Because of this, they also gain lesser points every time they level up with you. 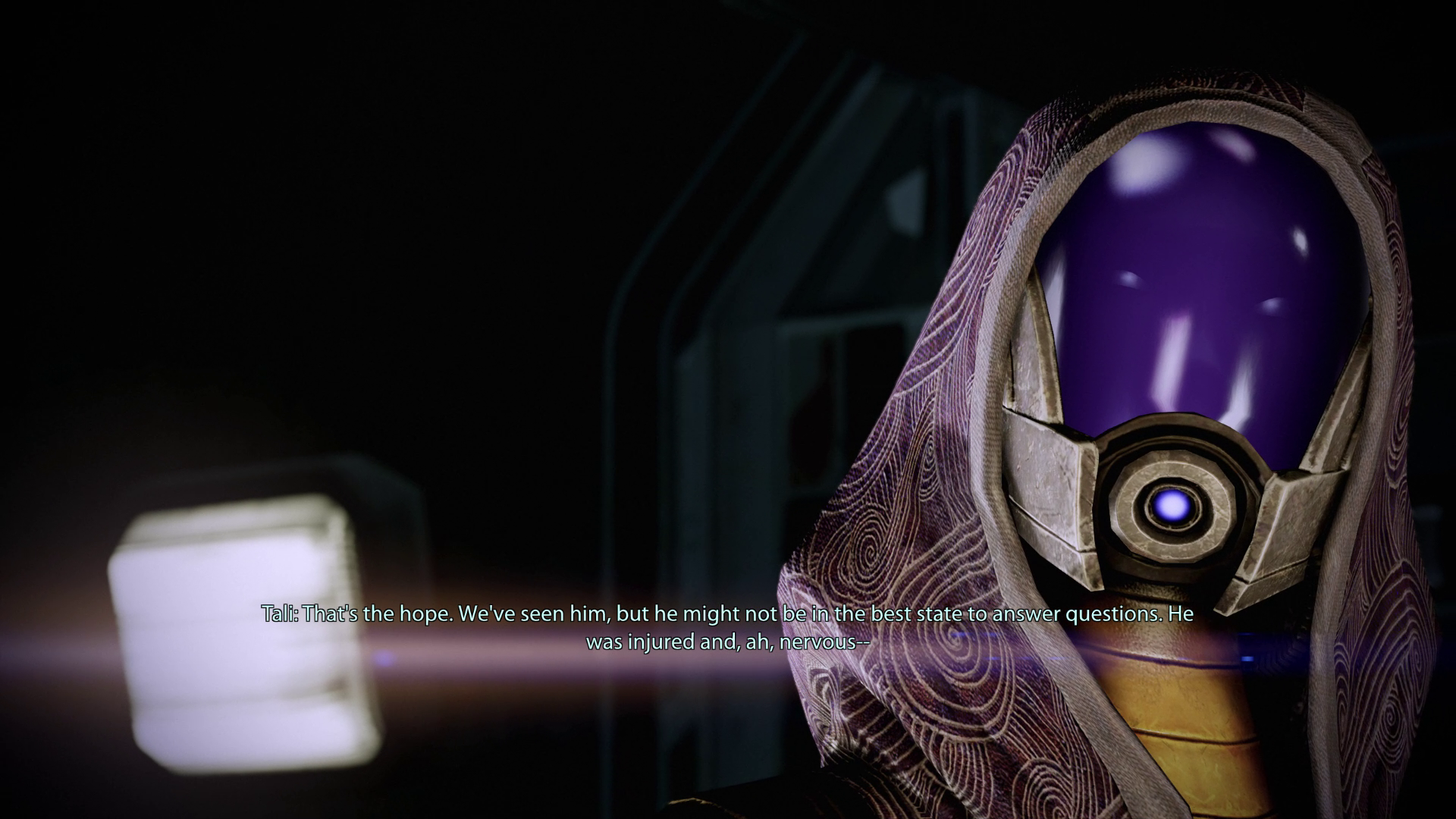 Since you’ll only bring two at a time, the others who’ve been left in the Normandy will still continue to gain levels. Because of this, you won’t have to worry about accumulating XP for them again should you wish to switch Squadmates. What’s more is you get to direct them the way you want to since you have access to their Talents, Abilities and Powers. Although Squadmates follow you by default, you can make them regroup, move or attack specific enemies as well. These legitimately make you feel like a commander.

In Mass Effect Legendary Edition, you recruit Squadmates in a similar way, that is, by completing quests related to them from the main games or DLCs. Some however, are readily available as they’re part of the group you serve. If you’re interested in developing romantic relationships with them, you’ll have to react positively and agree with whatever they’re saying by always opting for the Paragon or blue dialogue options.

In Mass Effect 1, there are 6 recruitable Squadmates. Whatever Weapons, Armor and Mods you have, your Squadmates can use. However, note that their Weapon Damage isn’t as potent as Shepard’s, which means that you shouldn’t fully rely on them to carry the fight. To balance this out, their accuracy is much better, regardless if they’re trained at using their active Weapons or not, allowing them to effectively hit enemies often. 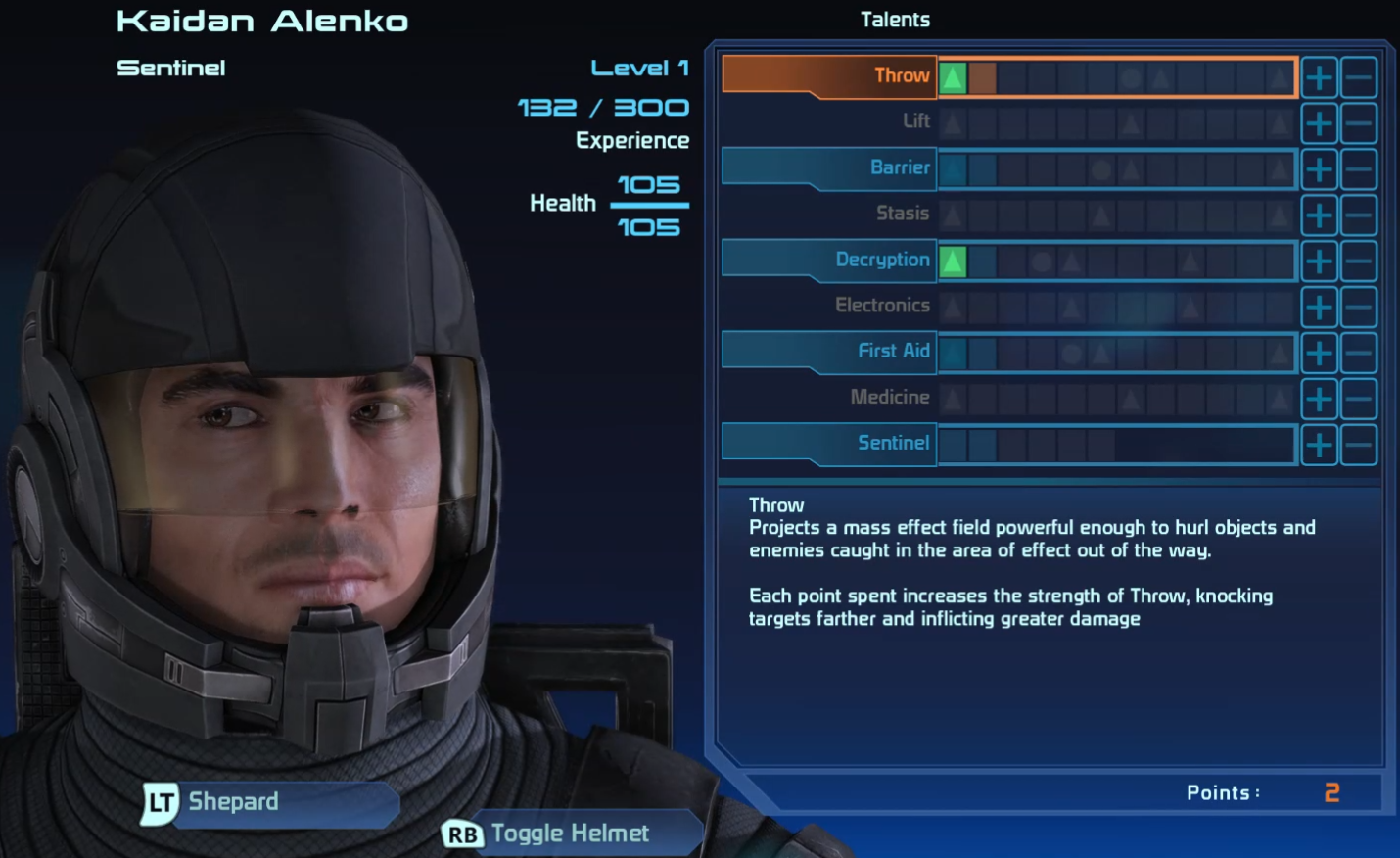 Remember to bring Squadmates who have Electronics and Decryption Talents if Shepard doesn’t possess any of these Skills. Hacking locked containers is a must since your entire Squad will gain extra XP while getting valuable Equipment in the process. Additionally, with the Electronics Talent, you can repair a larger portion of the Mako Vehicle’s damaged hull due to enemy attacks when you’re exploring planets.

In terms of romance options, you can deepen your relationship with 3 Squadmates, two of them are heterosexual whereas one can be with a male or female Shepard. Eventually, it also becomes possible to be confronted by two of your love interests if you’ve been flirting with both of them. Note that you can only end up in a romantic relationship with one Squadmate in this game. 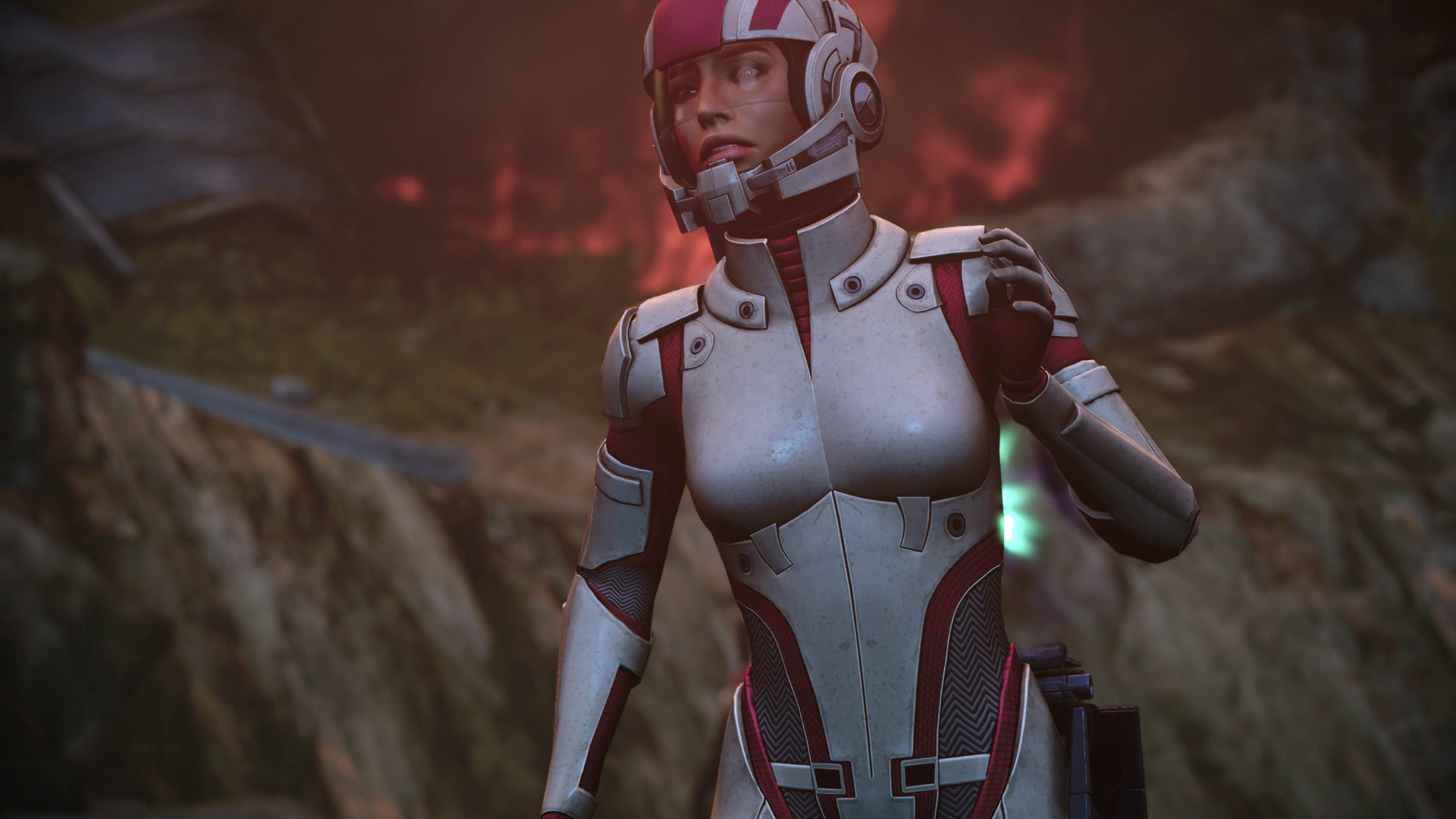 In Mass Effect 2, the number of recruitable Squadmates has significantly risen from 6 to 12. There are also Loyalty Missions associated with them, which will provide you extra XP and a Bonus Power. You can only activate one Bonus Power at a time. Note that your total Power Points do not increase as a result.

One combat change that you’ll also have to consider when taking two Squadmates with you is the new Armor System. In Mass Effect 2, enemies wear Armor, Shields, Barriers, or a combination of these. What’s different this time around is that most Powers will no longer work against them if you haven’t destroyed their protective layers just yet. Because of this, you’ll have to make sure that your Squad is fully equipped to effectively damage these defenses in order to quickly eliminate your enemies. 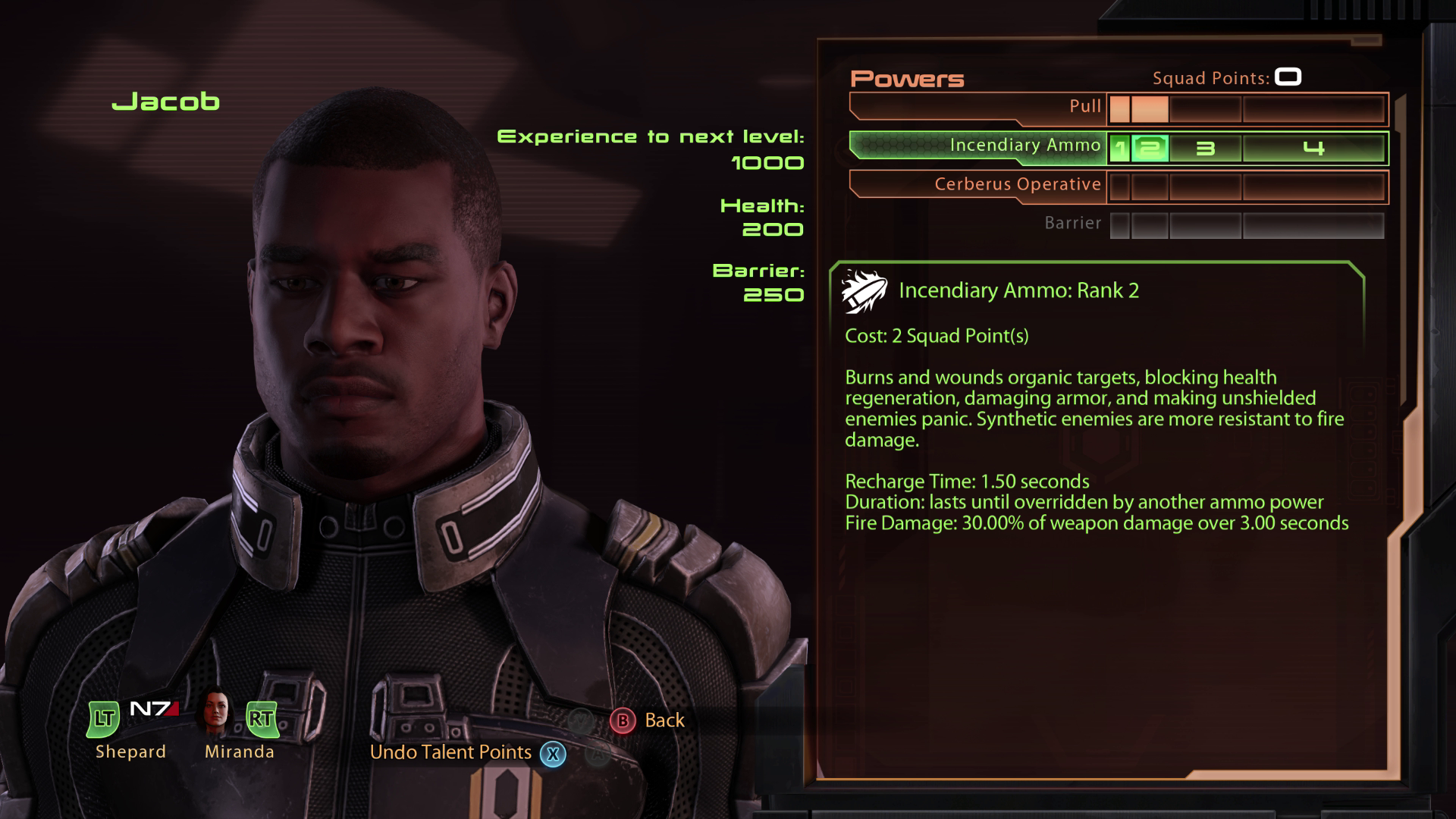 When it comes to Weapons and Upgrades, Squadmates are also subjected to the same mechanics as Shepard and you can choose their Weapon Loadouts. Whatever Upgrades you research for your character will automatically be useful to them as well. Therefor, you no longer have to swap their Weapon Mods like you did in Mass Effect 1.

Moreover, your Squadmates’ Weapon Damage continues to be lower than that of Shepard’s while their accuracy and stability remain high. Their Armor has also been stripped down in such a manner that they can only cycle between two outfits without bonuses to boost their performance. They have one by default while the second is unlocked after completing their respective Loyalty Missions. This means that they’ll have to rely on the Armor Upgrades you’ll be researching to benefit the entire Squad. Furthermore, there’s also Squad Member Upgrades to enhance the damage Squadmates inflict or the strength of their Shields. However, this is only available to a select few.

In terms of romance options, you can continue your relationship from the previous game by using your imported character. Alternatively, you also can start a new one. 7 companions are available to be romanced 3 for males, 3 for females, and 1 that is interested in either. 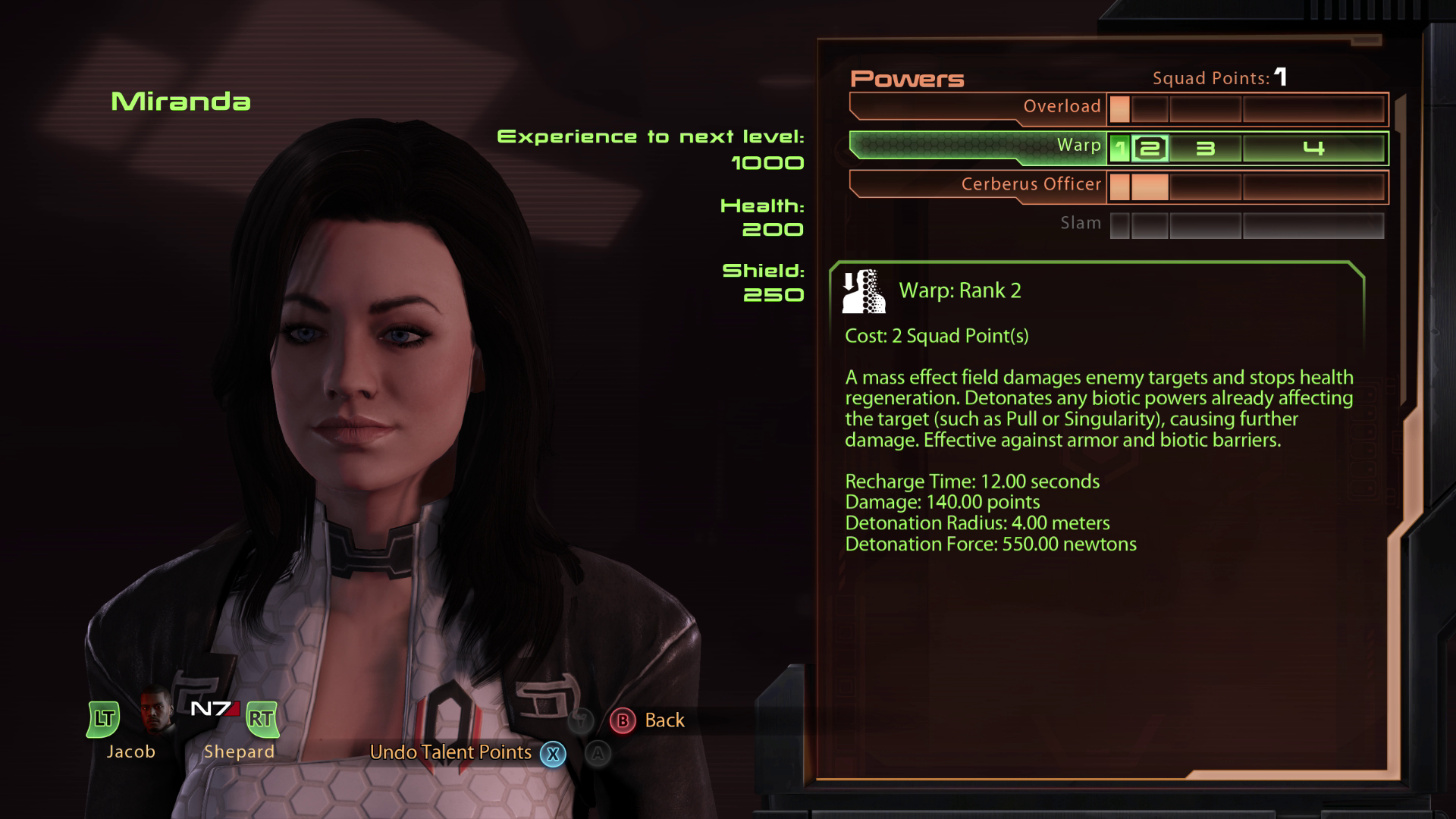 Note that when you’ve started the Loyalty Missions of the Squadmates you’re interested in, romance-related dialogue will not be available unless you complete said Missions. Similar to how you develop relationships in the past, after numerous exchanges with one another, you’ll eventually have an official love interest. What has changed is that you can dump your supposedly “one and only love interest” to be affectionate to other Squadmates. However, doing so will prevent you from courting them again. In some cases, you’ll have to increase your Paragon Score even more in order to effectively woe specific ones. Because of this, in a single playthrough, you can romance all of the available Companions possible to your gender if you plan for it.

In Mass Effect 3, the number of recruitable Squadmates have decreased from 12 to 7, which closely resemble the total value available in Mass Effect 1. When it comes to Bonus Powers for Shepard, you can still activate one but now, Squadmates unlock two Bonus Powers instead. You gain access to these by frequently conversing with them or by completing some DLC quests.

In both Mass Effect 2 and 3, your Squadmates’ Powers are subjected to a global cooldown, similar to Shepard’s. However in the third game, the weight of their Weapons won’t affect the recharge times of their Powers, which continue to be slower than that of your character’s.

When it comes to Weapons and Upgrades, adding mods are now open to Squadmates again, similar to how it was done in Mass Effect 1. The only difference is you’ll add these via a Weapon Bench. Moreover, they still suffer from decreased Weapon Damage but their accuracy and stability continue to be decent. In terms of Armor, your Squadmates finally get a break since the Armor you choose for them now has Weapon Damage and Shield Strength bonuses, to name a few.

Another combat change that heightens the role of Squadmates in quests is the introduction of Power Combos. Power Combos require a Source Power, which determines what the type of damage you deal, and a Detonator to trigger the explosion. You’ll have to activate both Powers in quick succession to successfully deal a hefty amount of damage against enemies. In terms of Squadmates, you’ll have to make sure that the Powers they possess synergize well with the rest of the Squad so you can execute multiple Power Combos in order to breeze through combat.

When it comes to romance options, you can still continue your relationship from Mass Effect 2 upon playing as your imported Shepard or you can opt to begin again. If you’re a male Shepard, you can romance one Squadmate but if you’re a female Shepard, you have the option of choosing between two gentlemen from the DLCs. Additionally, two from your Squad don’t have a preference when it comes to gender. What’s different in Mass Effect 3 is that some relationships can develop at the start of the game whereas others only begin in the middle. You can still flirt with multiple Squadmates but you will only have one permanent partner at the end.