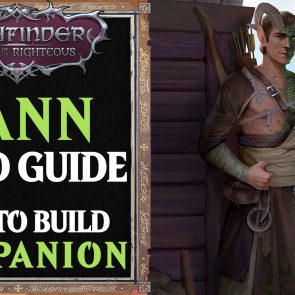 Lann Build Pathfinder Wrath of the Righteous Guide – In this Lann Build Guide I’m going to break down the best Attributes, Skills, Feats, Ki Powers, Mythic Path and Equipment you should focus on to make the most out of Lann. With this Companion, I’ll be going for the pure Zen Archer Monk Build, which allows you to deal the most damage possible without the need to engage in multiclassing. If you’re looking for a Ranged DPS Build that can easily destroy enemies while having excellent Armor Class (AC), then this beginner-friendly Lann Build Pathfinder Wrath of the Righteous Guide is for you! 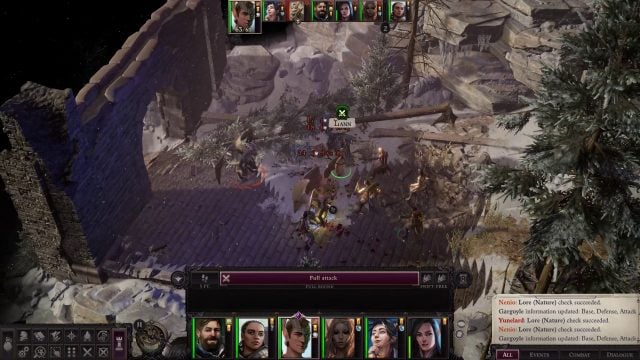 Lann is not your typical Monk since he’s a much more effective ranged combatant. His Build focuses on being stealthy at the start of an encounter to surprise enemies, closely followed by shooting arrows from his Bow. 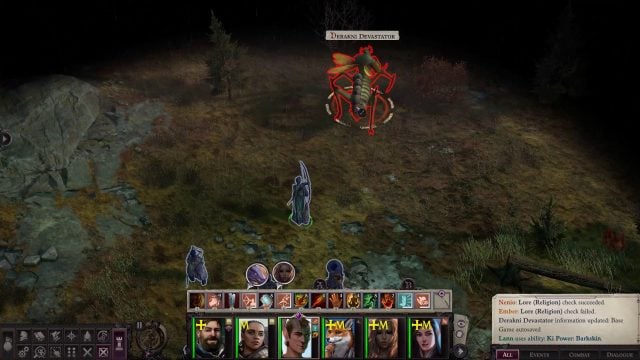 Specifically at Level 5, Lann gains Ki Arrows that allows him to use his fists instead of arrows to deal massive damage. The higher the level and the bigger his size is, the more potent Unarmed Strike becomes as compared to his Weapon. Note that this Zen Archer Monk Feature is automatically implemented, which means that you won’t be activating it prior to the start of an encounter. However, even if you use Unarmed Strike for damage, you still utilize your Bow for attacks, specifically the Enhancement Bonuses you get and for the purposes of overcoming Damage Reduction (DR).

By the time you reach Level 20, you’ll be able to attack a total of 6 times thanks to your BAB and Flurry of Blows. As a result, you can kill several weak to average enemies in a single turn. This, together with dealing great Unarmed Strike Damage, are the reasons to go pure for this Zen Archer Monk Build because you’re able to guarantee the deadly damage you inflict from a distance. What’s more is you end up having a very high AC since both of your Dexterity and Wisdom Modifiers, together with the AC Bonus you receive as a monk, which other Ranged Classes like Rangers, aren’t capable of.

Going back to Flurry of Blows, you also have the option to add your Strength Bonus to Damage Rolls rather than the Dexterity Bonus as long as you equip a Composite Bow. All these things combined make Lann a “Machinegun Archer” who can attack more than one enemy a turn in many cases, which is absolutely deadly. 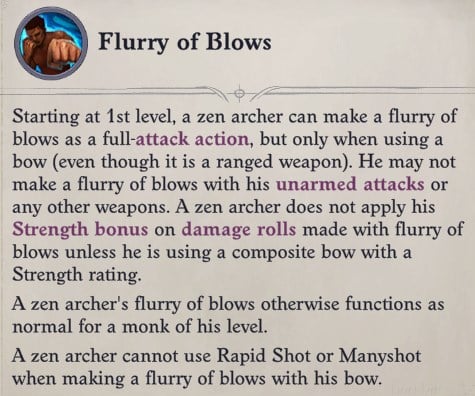 Remember that you can’t use Rapid Shot or Manyshot with Flurry of Blows so we won’t be selecting either of them for this Build. Both Feats will not be increasing the number of attacks you make so it’s counterproductive to take them. Your chances of dealing more damage is higher with Flurry of Blows since you’re able to attack with your Bow more than once in your turn.

For this Lann Build Pathfinder Wrath of the Righteous Guide, starting at Level 4 and after every four levels, you’ll be able to add 1 point to any of your Attributes. With Lann, you have an ideal Attribute Spread so all you have to do is to enhance them further to deal the most amount of Ranged Damage with your Unarmed Strikes. At Level 4, you’ll want to add 1 Wisdom since starting at Level 3, Lann uses his Wisdom Modifier when attacking with his Bow. And it’s also added to his AC, which makes it harder for enemies to hit him. With the Headband of Inspired Wisdom +2, you should have 20 Wisdom with a +5 modifier. 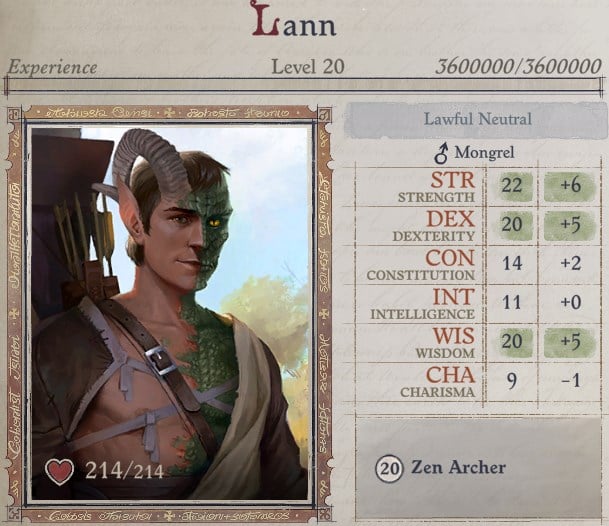 Next is Strength, which you can increase by 3 when you reach at Levels 8, 12, and 16 to deal great damage. Thanks to the Racial Bonus you get from being a Mongrel as well as the Belt of Physical Flow +2, you’ll end up having 22 Strength with a +6 modifier. 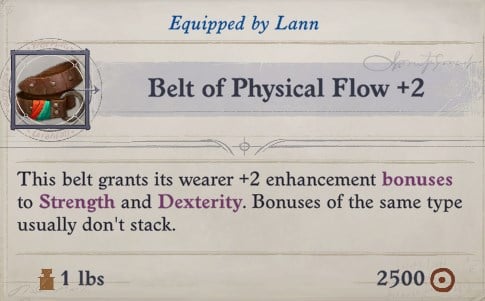 Lastly, you should invest 1 point into Dexterity at Level 20. Your Dexterity Modifier improves AC, much like your Wisdom Modifier. Similar to Wisdom, you ought to have 20 Dexterity with a +5 modifier.

When it comes to Skills in this Lann Pathfinder Wrath of the Righteous Build Guide, it’s ideal to focus on Stealth, Mobility and Athletics. Activating Stealth before approaching enemies allows him to surprise them. Surprise Attacks are advantageous to your party because for one full round, each member is able to prepare for the fight, whether they intend to move closer to their targets in order to hit them in succeeding rounds or to curse and damage them. During this time, since they’ve been caught unaware, they won’t be able to perform any action. 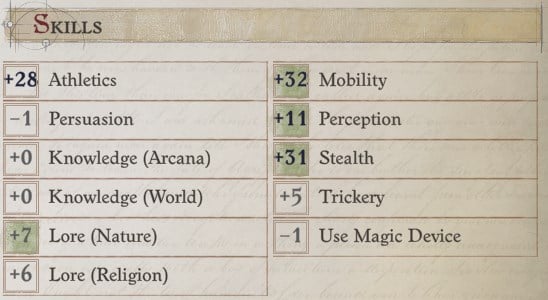 Next is Mobility, which lets you cross bridges with ease. This means that your party is able to travel to “unreachable places” without suffering HP losses. Mobility is important especially at higher levels when you frequently have to pass by difficult terrain. Similarly, we have Athletics. It allows you to move boulders or heavy bookshelves to reveal hidden paths.

All of these Skills work well together due to your good Strength and Dexterity Bonuses.

From Levels 3 to 20, you’ll be able to choose 9 Feats for Lann with 1 Feat at every other level. You’ll focus on dealing damage with your Ranged Unarmed Strikes and Ki Powers. This powerful Build lets you eliminate enemies efficiently thanks to the number of attacks you’re able to execute in a single turn. 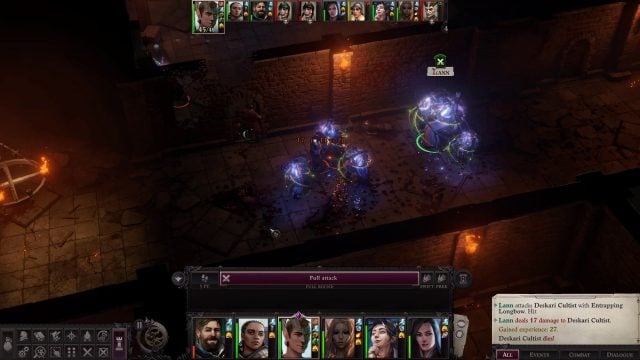 If you’ve noticed, I didn’t include Snap Shot in this list since you automatically get it at Level 9. This Feat lets you threatened when enemies are near you in order to execute Attacks of Opportunity when wielding a ranged weapon. 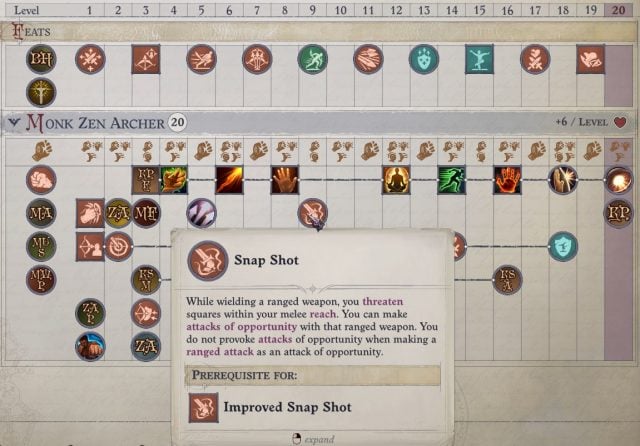 As a Zen Archer Monk, you get 5 Bonus Feats, which don’t stack with your regular Feats. The advantages of having them include gaining earlier access to some Feats as well as selecting extra ones that synergize very well with this Build. For instance, Improved Precise Shot has a BAB require of 11. We’re able to get this much earlier even when our BAB is 6.

Instead of Spells, Zen Archer Monks have Ki Powers, which they can activate based on the number of Ki Pool Points they have. These points are calculated as ½ of your Monk Level plus your Wisdom Modifier. From Levels 4 to 20, you’ll be able to select 8 Ki Powers. Note that the first 4 Ki Powers have to be in order.

You’ll notice that these Ki Powers are related to either buffing up your defenses or restoring you from damage. Avoid taking those that deal damage such as Ki Power: Scorching Ray because you can only attack with this once and the damage you inflict is much lower compared to your Bow Attack + Unarmed Strike Damage duo. You can then choose the other four, and in whichever order you prefer.

For Mythic Feats, you’re going to select the ones that significantly enhance your Initiative Checks, Attack Rolls, Damage Rolls, and Damage while ensuring that your AC is considerably high. Specifically, you should aim for the following in this order:

For Lann’s Weapon, you’ll want to stick with one type of Bow to enhance its capabilities further based on the Feats you choose. This is valid for Way of the Bow, Point-Blank Master, and Improved Critical Feats. You can opt for a Composite Longbow or Shortbow like the Entrapping Longbow or Hunter’s Assurance, respectively. Composite Bows let the Zen Archer add their Strength Modifier for increased damage. What’s valuable with these is the Enhancement Bonus they provide that adds to your total damage. If you’re still having trouble hitting targets at earlier levels, it’s best to equip a Masterwork Bow to receive a +1 Attack Roll Bonus. 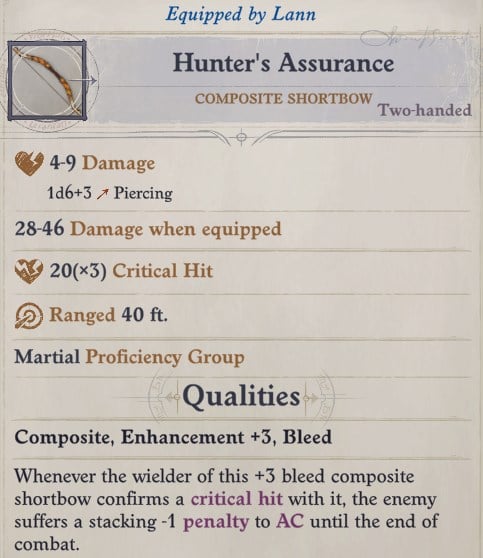 Additionally, remember to bring 2-4 Bows made out of different materials for the purposes of swapping between them to overcome enemy DR. This is essential because you can’t make use of Ki Strikes since you won’t switch to Unarmed Attacks.

Since Lann isn’t proficient with Armor, he’ll be wearing a Robe instead, particularly the Robe of Order. This increases your Ki Pool by 2 points while providing you with Attack Roll Bonuses. 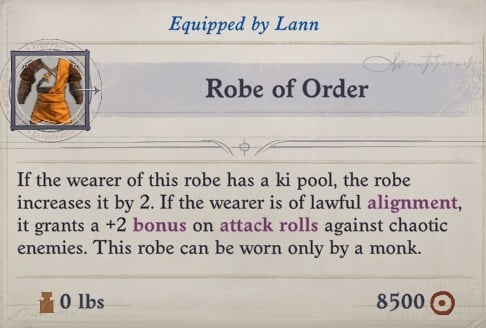 When it comes to Accessories, it’s important to equip the Bracers of Armor +5 and Ring of Protection +3 to boost AC. Meanwhile, Cloak of Resistance +3 enhances your Saving Throws against the effects of Magical Attacks. As mentioned in the Attributes Section, you’ll also need to wear the Headband of Inspired Wisdom +2 and Belt of Physical Flow +2 to improve Wisdom, Strength and Dexterity.

Lann’s Build focuses on the dealing the great damage with Unarmed Strikes every time he attacks. When he executes normal attacks aside from Flurry of Blows, his damage decreases per attack because of his BAB. This is the reason why we’ve maxed out Strength and opted for Deadly Aim to ensure that we get the most out of the damage he deals, rather than putting most of our efforts into raising his accuracy.

Make sure to cast Enlarge Person on Lann if you have a caster like a Shaman in your party to increase his size. This greatly improves the base damage he deals with his Unarmed Strikes from 2d10 as a Medium-Sized Monk to 4d8 as a Large-Sized Monk at Level 20. 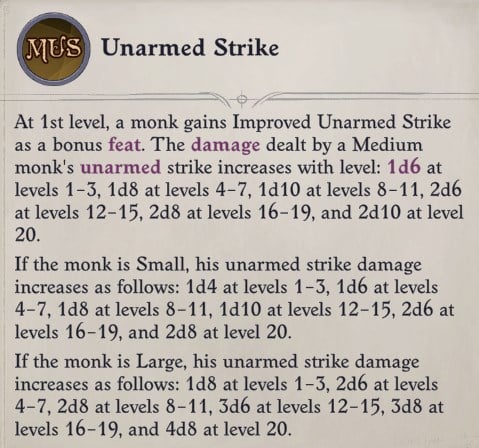 You’ll have to carefully plan out your Feats since there are only a limited number of Bonus Feats you can pick from. This is the reason why I didn’t get Dodge and Improved Critical earlier, otherwise, you won’t be able to maximize the ones you really need.

Lastly, activate Ki Power: Extra Attack before you attack and if you have no intention of moving during your turn. Or else, you’ll waste this as well as your Ki Pool Points. Preserve Extra Attack for challenging enemies since you don’t have an unlimited number of points at your disposal. 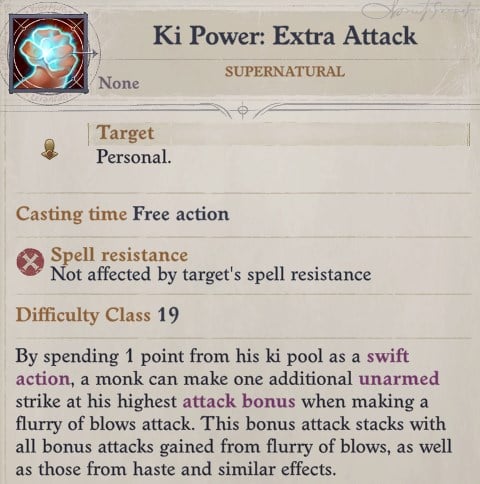