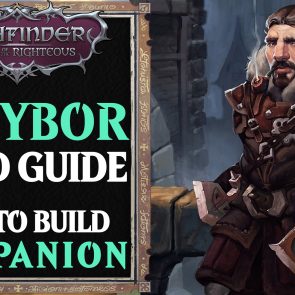 Greybor Build Pathfinder Wrath of the Righteous Guide – In this Greybor Build Guide, I’m going to break down the Attributes, Skills, Feats, Slayer Talents, Mythic Path, and Equipment you should choose to maximize Greybor’s Slayer Class since we won’t engage in multiclassing. If you’re looking for a way to deal massive damage with a combination of Intimidate Checks, Sneak Attacks, and Critical Hits, then this simple Greybor Build Guide is for you!

Right from the start, Greybor’s Slayer Build is promising. He has a decent Attribute Spread as well as Feats that complement one another. Two-Weapon Fighting and Weapon Focus both improve his Attack Rolls whereas Hammer the Gap and Power Attack provide extra damage and boosts, making him impressive in Combat. Moreover, he can attack 7 times per turn, which we’ll take advantage of in this Companion Build. 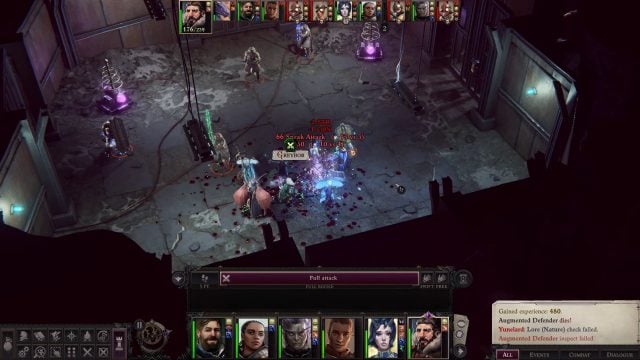 In terms of Equipment, you gain proficiencies with Simple and Martial Weapons, Light and Medium Armor, and Shields, except for Tower Shields. Because of this, you’ll want to take the Heavy Armor Proficiency Feat right away at Level 11. When you equip Heavy Armor, you effectively boost Greybor’s Armor Class (AC) or how well he evades attacks. This is vital in order to survive encounters given that he’ll be on the front lines all the time.

Slayers are a multifaceted Class because they have a lot of unique qualities that make them fun and straightforward to play as in Pathfinder Wrath of the Righteous. First, they have Slayer Talents, which allow them to take extra Feats via Combat Style Feat without needing to fulfill prerequisites. For example at Level 2, Greybor has taken Double Slice. This Feat enhances the effectiveness of his Off-hand Weapon’s damage since it takes his high Strength Modifier into account. 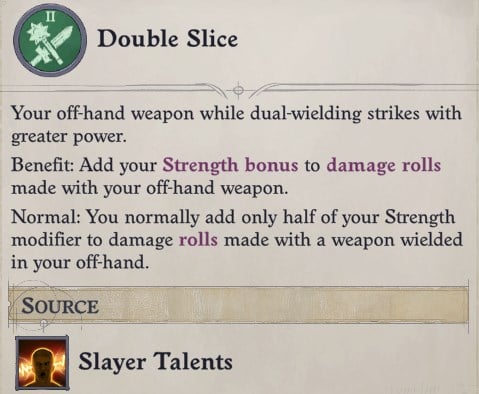 However, Slayer Talents aren’t limited to this as they also provide you with talents to confront and take down enemies. At Levels 4 and 8, you gain Weakening Wound and Slow Reactions. Both become relevant when you successfully execute Sneak Attacks. Weakening Wound reduces the target’s Damage Reduction (DR) based on your current level. As such, you’re able to inflict the full damage of your Two Weapons against them. On the other hand, Slow Reactions inhibits enemies from performing Attacks of Opportunity.

In addition to Slayer Talents, you also gain Sneak Attacks at every three levels starting at Level 3. It’s not as frequent as the Rogue or Vivisectionist Archetypes but it’s enough to make a huge impact in combat. With this type of attack, you’re able to catch enemies off-guard, specifically when they’re flanked because they lose their Dexterity and Dodge Bonuses to AC. You then deal extra 1-6 or 1d6 Precision Damage. 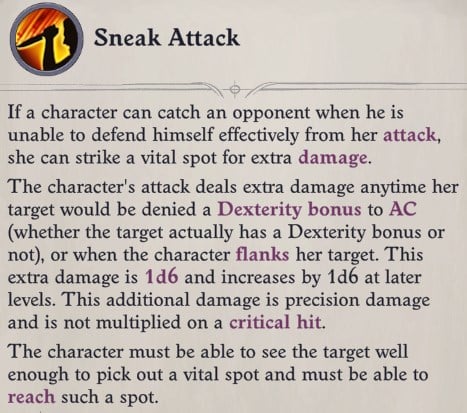 Since you’ll build Greybor as a pure Slayer, you’re able to inflict 6d6 Precision Damage by the time you reach Level 18. What makes this even better is the Accomplished Sneak Attacker Feat that increases the damage further to 7d6.

Last but not the least is Greybor’s ability to study his targets by spending a Move Action. This is also known as Studied Target, which is a buff since it provides him with Attack and Damage Roll Bonuses while improving his Saves against enemies. These bonuses increase by +1 each at Levels 5, 10, 15 and 20. Studied Target synergizes well with this Build since you can automatically reap its benefits upon successfully performing Sneak Attack Damage. To make matters better, you can also use this as a Swift Action, meaning, you’re able to attack in the same turn, when you reach Level 7. 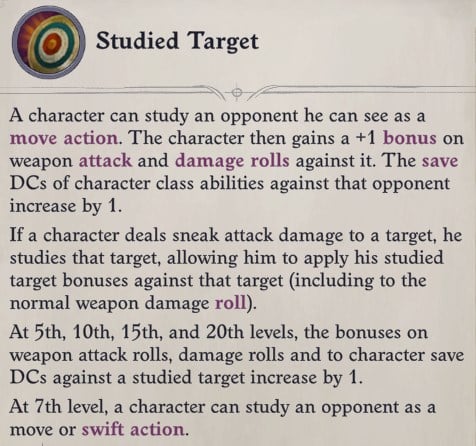 Starting at Level 8 and after every four levels, you’ll be able to add 1 point to any of your Attributes. With Greybor, you’ll raise two Attributes, namely Strength and Intelligence. Since your attacks and damage rely on Strength, you’ll want to allocate 2 points into this at Levels 12 and 16 to attain a corresponding modifier of +5. In order to raise this further, I highly recommend purchasing the Belt of Physical Might +4 from the Skeletal Salesman. Not only do you get 24 Strength, but you also boost Constitution to 18 as well as your max HP to improve Greybor’s survivability. 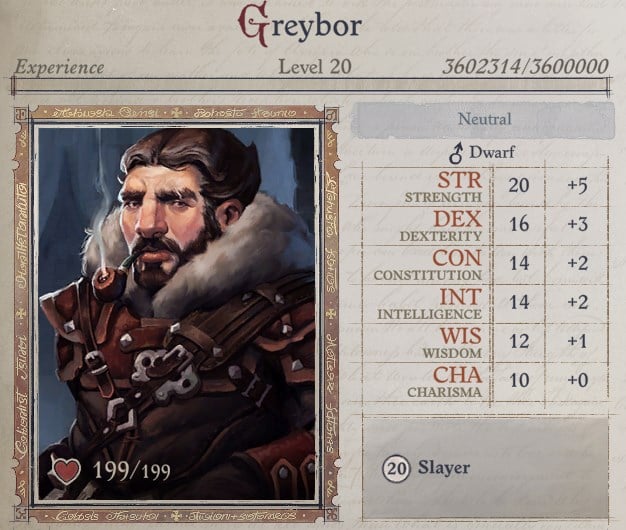 At Level 20, you’ll invest 1 point into Intelligence to increase its modifier to +2. This Attribute is essential to your Master Slayer Ability, which you also get at that level. Coupled with Studied Target, Master Slayer allows you to execute one attack using your full attack bonus. What happens is your enemy either receives the damage or dies if they fail their Save. It can easily one-shot targets as long as you use it against those with low Fortitude Saves. 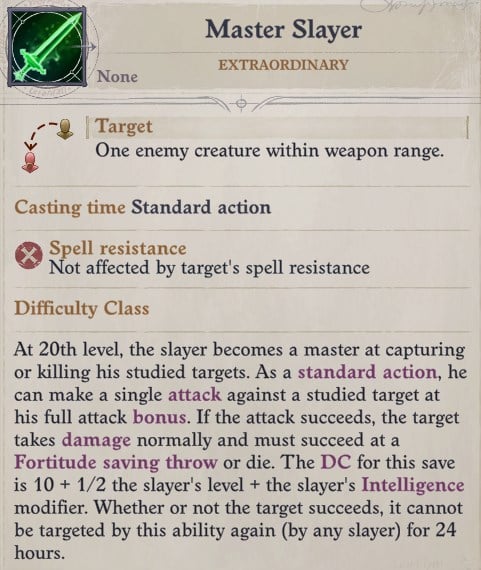 A higher Intelligence Modifier means that the Ability’s DC is harder to beat. To improve this modifier even further, you ought to wear the Headband of Mental Flow.

When it comes to Skills, you’ll want to enhance Persuasion, Athletics, Stealth and Mobility since they suit your Build quite nicely. For instance, you’ll need to significantly boost Persuasion since you’ll be making Intimidate Checks for Dazzling Display and Shatter Defenses Feats. With this combo, you turn targets into flat-footed creatures to greatly diminish their AC. 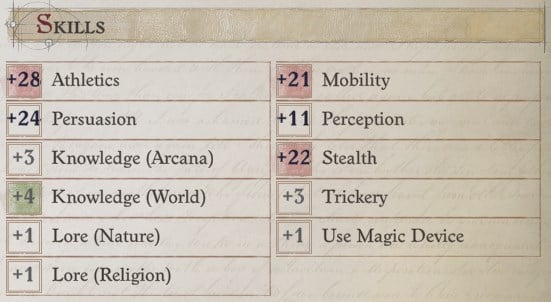 Next are Athletics and Mobility, which help you push heavy objects, jump over bridges, and cross difficult terrain to progress in quests. Mobility also allows you to move near enemies without provoking Attacks of Opportunity. Last is Stealth that reduces random enemy encounters when you’re resting or exploring the world.

From Levels 11 to 20, you’ll be able to choose 5 Regular Feats and 2 Combat Style Feats for Greybor. You’ll focus on acquiring those that enhance your defenses, attacks, damage and Critical Hits. 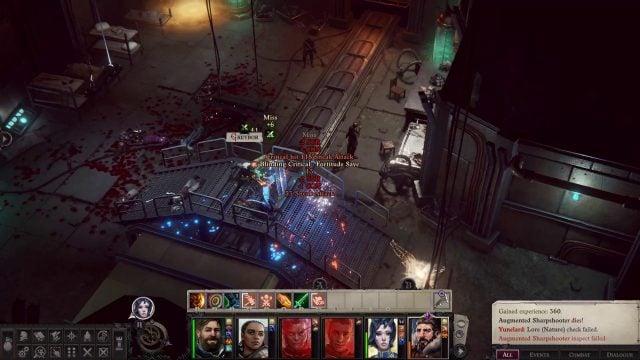 The idea behind these Feats is to first improve your defenses with Heavy Armor Proficiency. Although your AC is average at best, you at least won’t immediately die in combat. As such, you’ll want to eliminate them first before they put you down. This is the primary reason why we’re going to combine Dazzling Display and Shatter Defenses with Sneak Attacks and Critical Hits. Our goal is to deal as much damage as we can as influenced by the number of times we’re able to attack in a single turn. 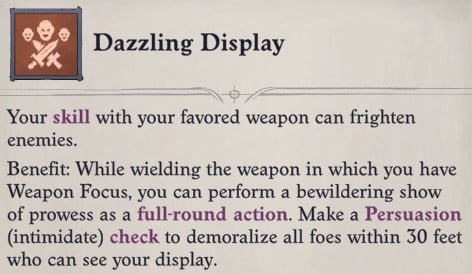 Dazzling Display and Shatter Defenses demoralize targets to deny them of their Dexterity and Dodge Bonuses to AC. This means that they’re easier to hit since they become too vulnerable to dodge any of your actions. Coupled with high Strength, Sneak Attacks and Precise Strike, you’re able to inflict huge Precise Damage. Precise Strike is a Teamwork Feat so you should have an ally who has it as well. Note that its respective damage stacks with the Sneak Attack Damage you deal so it’s a win-win condition.

In addition to these, you should also take Improved Critical to increase the chances of executing Critical Hits especially since your Dwarven Waraxe doesn’t have an ideal threat range.

Instead of Spells, Slayers receive special talents to primarily improve their ways of dealing with enemies. Here are the Slayer Talents that Greybor should take in order:

Since we already took 2 extra Feats, we’re going to choose the top 4 talents, which are triggered the moment we successfully execute Sneak Attacks, to enhance our Melee Build. First we have Dispelling Attack to strip your targets of their buffs, which is common in the game. Second is Crippling Strike to deal 2 points of Strength Damage coupled with Wearying Strike to inflict 1 point of Constitution Damage.

And last is Blinding Strike, which permanently blinds enemies in order for their attacks to most likely miss you. This is important since you’re always positioned at the front of encounters. In combination, these Slayer Talents are deadly due to how you effectively weaken them even more.

Defensive Study, Rupture Restraints, and Last Stand are good defensive Mythic Abilities that help you stay alive in combat. Defensive Study gives you AC Bonuses against the enemy whom you’ve used Studied Target on while Rupture Restraints dispels any condition you initially take such as being frightened, shaken, shattered and dazed, to name a few. 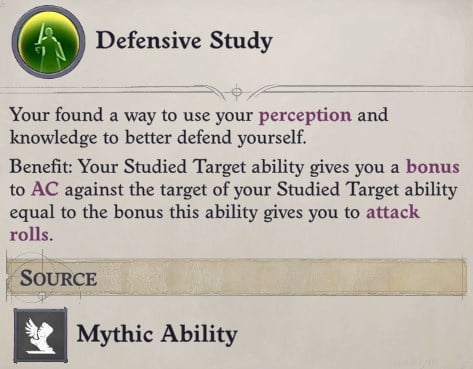 Meanwhile, Last Stand makes you immune to damage when your HP is low. Additionally, you have other Abilities to deal extra damage and to receive additional Attack and Damage Roll Bonuses when performing Attacks of Opportunity.

These significantly improve your Attack Rolls to counter the penalties you incur from Two-Weapon Fighting related Feats. You also receive bonuses to Damage Rolls, more Sneak Attack Damage, and a better critical multiplier to trigger Critical Hits as often as possible. 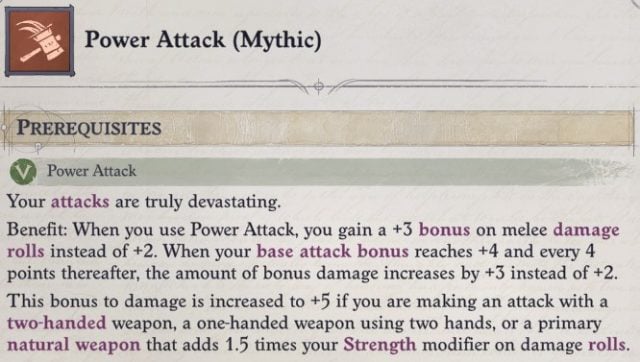 When it comes to Greybor’s Build, you can retain his default Weapons, which are the Dwarven Waraxe +3 and Crushing Cold. One thing to remember with Crushing Cold, however, is you automatically cast the Cone of Cold Spell upon confirming a Critical Hit so you can either substitute this with another Handaxe or position yourself at the very front of the party so you don’t damage any of your allies. 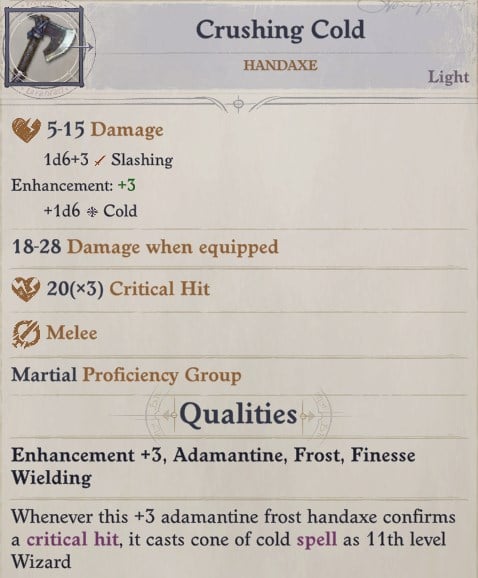 For Armor, I highly recommend donning Carapace because its Max Dexterity is higher than the rest of the Heavy Armor out there. You ought to also wear standard Equipment to boost defenses such as the Amulet of Natural Armor, Cloak of Resistance, and Ring of Protection. 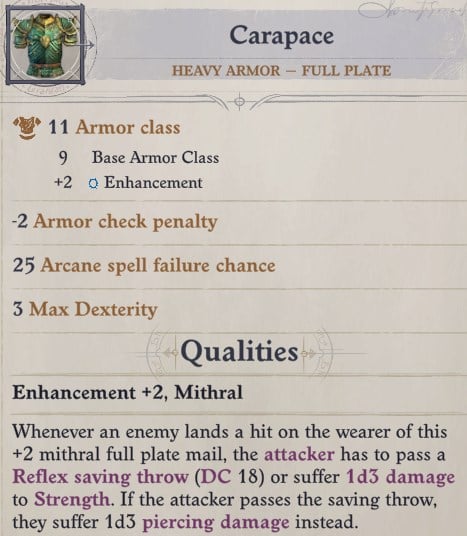 As mentioned previously, the Headband of Mental Flow improves Intelligence. What’s great with this headband is it also enhances Charisma, which you need to successfully make Persuasion Checks. Meanwhile, the Belt of Physical Might raises Strength and Constitution so when you find the +6 Version of this, be sure to equip it. Lastly, you can also wear the Gloves of Dueling in order to reduce the chances of being disarmed.

Greybor excels as a Slayer thanks to the massive damage, Sneak Attacks, and Critical Hits he’s able to pull off. Together with other Melee Characters in the party like Regill, Woljif and Seelah you’ll be able to obliterate multiple enemies in a single turn because of the synergies of their individual and Teamwork Feats. 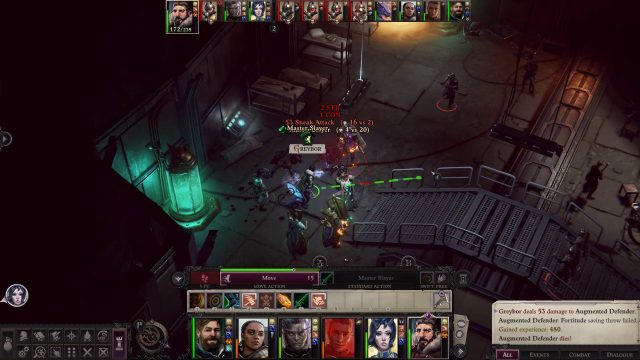 At Levels 13 and 14, you gain access to Slayer’s Advance and Quarry. Slayer’s Advance lets you increase your Movement Speed so you can nimbly approach enemies. Additionally, you no longer provoke Attacks of Opportunity when moving past their comrades. Quarry, on the other hand, is another buff that grants you Insight Bonus to Attack Rolls while confirming critical threats made against a target. This means that you no longer need to make a confirmation roll to critically hit them. Just make sure to constantly activate Quarry before you attack. 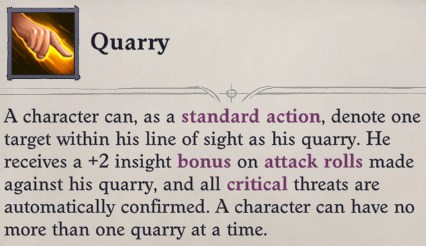 If you’re consistently getting hit at higher levels, activate Fighting Defensively in order to gain Dodge Bonuses to AC. Since you already have a high Mobility Rank, you receive a decent bonus of +3. Lastly, remember to cast Bull’s Strength on Greybor to provide him with additional Enhancement Bonuses to Strength, which further improves his Melee Attack and Damage Rolls.

Stay tuned for more of these Companion Build Guides and be sure to check our Twitch Channel or the Pathfinder: Wrath of the Righteous Wiki if you have questions on the game! Be sure to check out our other Pathfinder Wrath of the Righteous Guides like the Bloodrager Class, Arcanist Class, Cavalier Class, Top 5 Archer Builds, Best Class to Play, Regill, Sosiel,Woljif, Daeran, Wenduag, Ember, Nenio, Lann, Seelah, Camellia, and Beginner’s Guide!