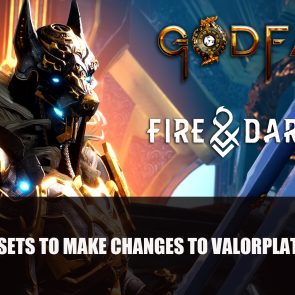 In a recent interview developer Counterplay Games’ went into detail about changes that will be coming to Valorplates with the Godfall Fire & Darkness DLC.

In a recent interview with developer Counterplay Games and Gamerant, the developer shared more about the changes coming with Valorplate ailments in Godfall‘s upcoming DLC Fire & Darkness. Players take on the role of Orin who can take on different forms with the use of Valorplates, armor which specialises in different abilities, gaining its own perks, stats and drawbacks. But in the upcoming addition Fire & Darkness expansion, there won’t be a new Valorplate being added.

The current version of Godfall already has 12 different Valorplates which are based on the Zodiac, and in the next DLC instead of a new Valorplate players will be seeing a revamp to the Ailment system. Director Nordlander explains that as the system stands the ailments don’t quite make the Valorplates that unique however this will change with the next expansion:

Many of our Valorplates are themed around an ailment like Ignite, Chill, Shock, and so on. These effects weren’t that different from each other, which made the Valorplates feel similar. With the launch of Fire & Darkness our ailments all have unique effects e.g., Chill slows enemies while Bleed increases the damage they take.

The changes will make the Valorplate you choose much more influential, meaning new builds and further ways to customise visually through new Valorplate skins.

Godfall Fire & Darkness was previously announced to be adding a new area to Godfall called the Fire Realm, with new enemies and loot to gain. Players will have a chance to claim over 20 new Valorplate skins.

The DLC arrives alongside the free Lightbringer update which adds a new Lightbringer Mode pitting players against the darkness to close three Tears before facing waves of enemies in a massive final battle. There will also be the Endgame matchmaking beta and new loot type called Cursed Items adding a massive boon but players will need to lift the curse to gain its full potential.

In case you missed it you can check out the trailer for the Fire & Darkness DLC and Lightbringer Update below:

Godfall Fire & Darkness expansion and free Lightbringer Update will launch on August 10th on the same day for PS5, PS4 and PC via the Epic Games Store. Godfall will be launching on PS4 for the first time also the same day and includes a free PS5 upgrade.

For more news be sure to check out next Mass Effect: Legendary Edition Does “Well Above Expectations” In Sales and New World Launch Gets Delayed To September 28th.