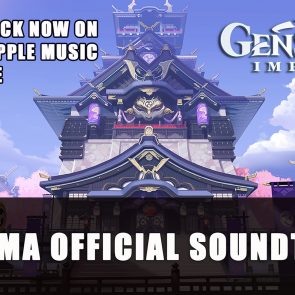 MiHoyo have announced that you now can listen to the soundtrack from Genshin Impact‘s Inazuma zone soundtrack now on music streaming platforms Spotify, Apple Music and Youtube. The online Action-RPG has quite the stunning soundtrack with the game’s latest zone Inazuma being no exception.

The post on the Hoyolab blog shares that the OST called “Realm of Tranquil Eternity” is now available as three disc album. “Sakura and Violet Thunder”, “Stories of the Floating World”, and “Battles of Inazuma” discs feature 62 tracks composed by Yu-Peng Chen@HOYO-MiX, and co-produced by the HOYO-MiX team and Sony Music Entertainment (Japan) Inc.

You can also check out the tracks on the following Youtube videos:

Genshin Impact is available to play on Playstation, iOS, Android and PC. You can check out the OST on Spotify, Youtube Music and Apple Music.