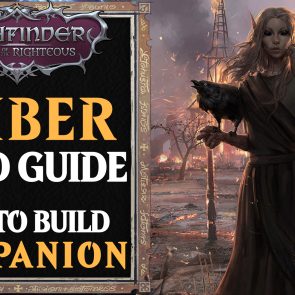 Ember Build Pathfinder Wrath of the Righteous Guide – In this Ember Build Guide, I’m going to break down the best Attributes, Skills, Feats, Spells, Hexes, Mythic Path, and Equipment you should take to make the most out of this character. You’ll also have the ability to buff and heal your allies. I’ll be showing an optimized Build that involves her default Stigmatized Witch Archetype, which is paired with the Crossblooded Sorcerer. If you’re looking for ways to severely weaken enemies while dealing great damage with Negative Energy and Fire Spells, then this Ember Build Guide is for you. 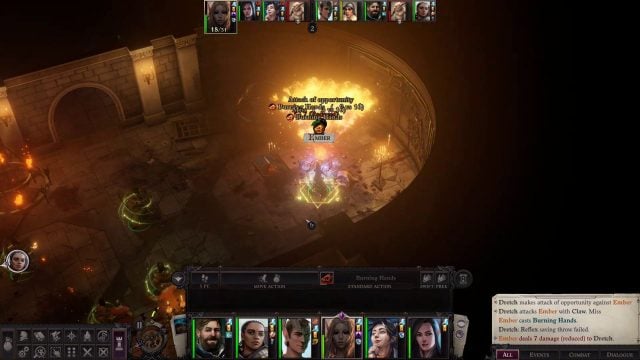 For Ember’s Build, you’ll want to improve her usage of Necromancy Spells coupled with Hexes. At earlier levels, it’s good to start casting Slumber to immediately debilitate your target, followed by using harmful Spells against them. Note that this is effective against Humans but not so much against other creatures. Because of this, you’ll have to try other Spells like Glitterdust to blind them or Ray of Exhaustion to impose penalties on their Attributes. Additionally, we’ll also explore the benefits of Conjuration Spells and other Hexes to buff and heal the party. 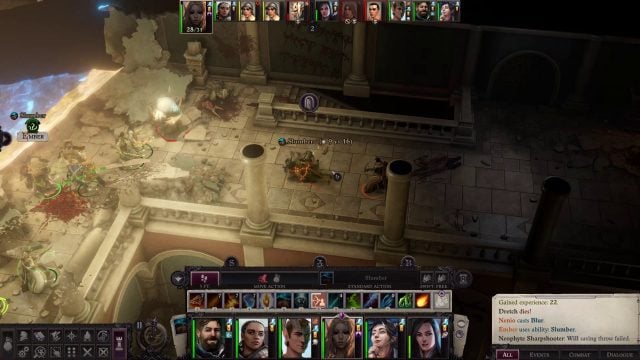 Ember’s Spellcasting Ability is Charisma, which is different from the Witch Class. But unlike Wizards, Witch’s are spontaneous casters so you don’t need to prepare their Spells beforehand. Instead, you’re able to cast these depending on how many available Spell uses you have for the day. This is then replenished after taking a rest.

By the time you meet her at Level 3, she would automatically possess the following Feats, Proficiencies, Abilities and Hexes:

At Level 5, you’re going to multiclass with the Crossblooded Sorcerer, which has the same Spellcasting Ability as Ember’s, to gain a Bonus Feat as well as two Bloodlines. Afterward, we’ll continue leveling up the Stigmatized Witch Archetype to unlock a special Hex for our allies. As a Level 1 Crossblooded Sorcerer, you receive the following:

Starting at Level 4 and after every four levels, you’ll be able to add 1 point to any of your Attributes. With Ember, you’ll only improve one Attribute and that’s Charisma. Charisma is the Stigmatized Witch’s Spellcasting Ability, which allows Ember to learn and cast numerous Spells. 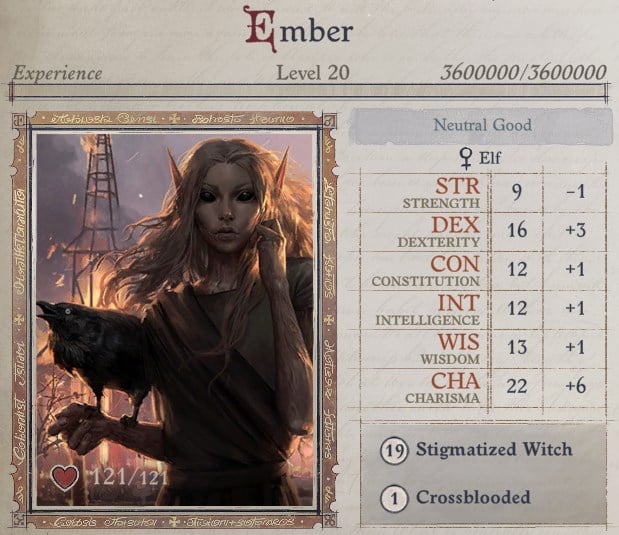 It’s also the modifier that’s added to the Spell’s Difficulty Class (DC), which enemies need to overcome to lessen or negate the Spell’s impact. After allocating 5 points into this Attribute, you ought to have 22 Charisma with a +6 modifier. You can further boost this by equipping headgear like the Headband of Alluring Charisma.

In terms of Ember’s Skills, you’ll primarily focus on raising Mobility and Persuasion. Mobility allows you to move carefully in between enemies without getting hit due to their Attacks of Opportunity. On the other hand, Persuasion, which is naturally high thanks to your good Charisma, helps you negotiate, intimidate or persuade NPCs to agree with your line of thinking. 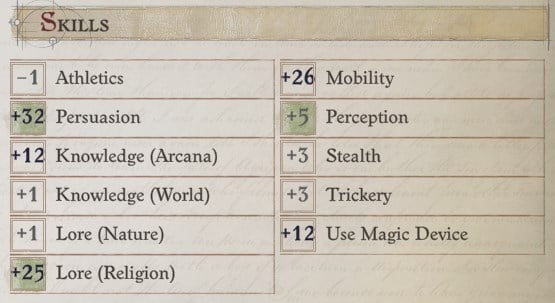 You can then opt to increase Knowledge (Arcana) or Lore (Religion) because of the initial bonuses you gain with these two. Knowledge (Arcana) helps make unidentified and rare magical objects known, which may be in the form of powerful Weapons or Armor. Meanwhile, Lore (Religion) increases your knowledge about extraplanar realms particularly those associated with religion. This is helpful in Combat when you need more information such as the enemy’s strengths and weaknesses to defeat them.

From Levels 5 to 20, you’ll be able to choose 8 Feats for Ember with 1 Feat at every other level. You’ll focus on dealing Necromancy Spells and mostly Conjuration Spells to support the party. 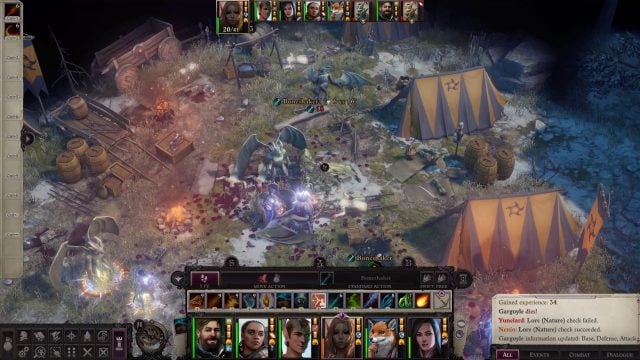 Starting at Level 5, you ought to take these important Feats in the following order:

Unlike the Metamagic (Empower Spell), you can heighten any of Ember’s Spells. You’re even able to replicate copies of your favorites per level without any consequences. So if you enjoy casting Enervation or Scorching Ray, then make sure to heighten it for each of the higher levels.

You can heighten Spells by going to Ember’s Spellbook Tab and clicking ‘Metamagic’ at the bottom left-hand corner of the screen. Add a Spell in the middle square of the big circle by double-clicking on the icon or by dragging it. Click the “Sword Icon” on top of this and then select “Write spell” at the bottom. 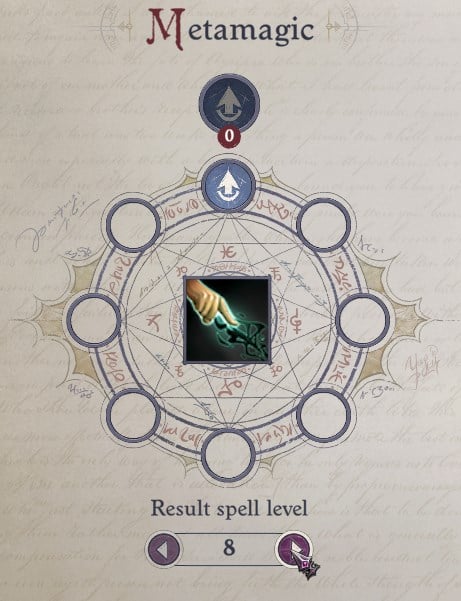 What makes Ember powerful is her versatility in terms of switching between different types of Spells. For instance, she can destroy regular enemies with Necromancy Spells or Fire Spells. And Hexes go very well with these since it debilitates them quite easily. Since you’ll also face the Undead, you’ll need secondary Spells that aren’t powered by Negative Energy, which actually heal them. In this section, I’ll be discussing the ones that you should get, although feel free to add other Spells that you find interesting. 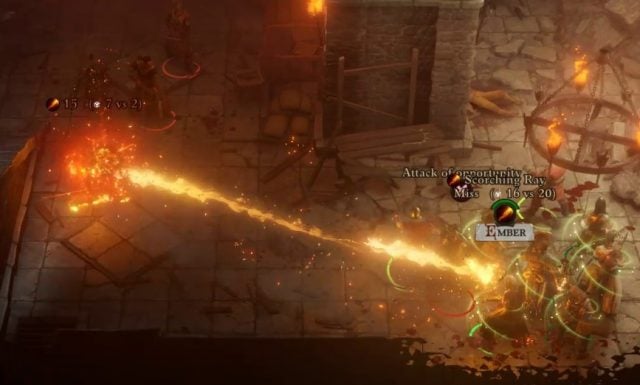 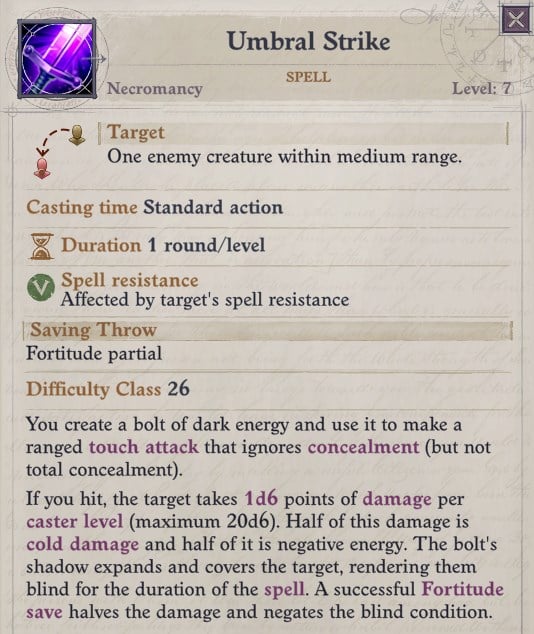 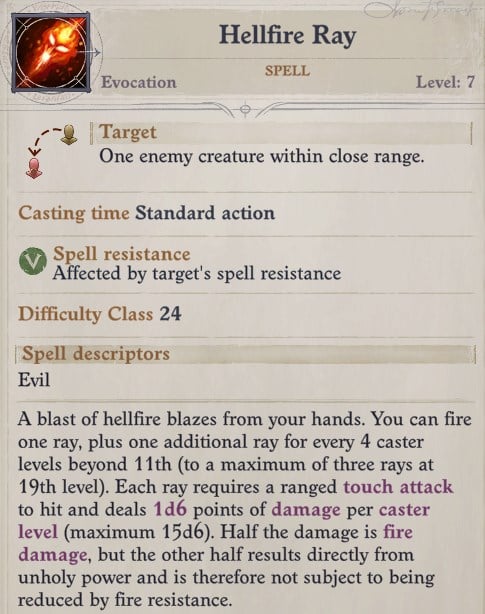 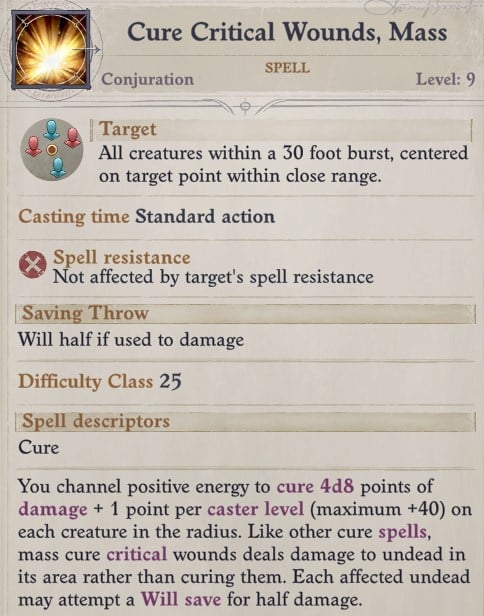 Due to multiclassing, you’re able to choose 8 Hexes for Ember instead of 9. It’s best to take the first four of these in order except for Life Giver. Specifically, this requires Grand Hex, which is automatically unlocked when the Stigmatized Witch reaches Level 18. Hexes are as useful as your other Spells that make enemies vulnerable especially when you don’t have access to them yet at lower levels. 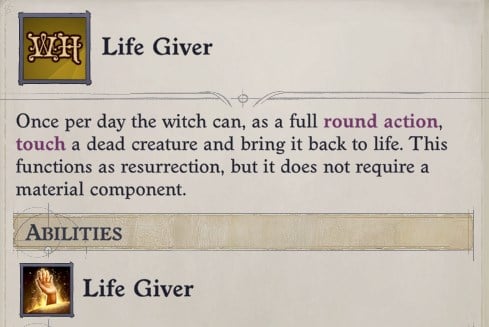 For Mythic Feats, you’re going to select the ones that enhance your Caster Level Checks, Spell DC, and Critical Multiplier such as Spell Penetration (Mythic), Spell Focus (Mythic) (Necromancy), and Improved Critical (Mythic) (Ray). You’ll also want to get Sorcerous Reflex in order to cast two Spells in a single turn right after making an Initiative Roll because the first one is considered a Swift Action. Lastly, the Expanded Arsenal (Magic School) (Conjuration) allows you to apply the bonuses from other Feats like Spell Focus (Necromancy) to your Conjuration Spells, making them more potent.

Ember’s gear is similar to Nenio’s except that you won’t be using Ranged Weapons at all due to the Weapon Attack Roll penalty you have. To boost your AC and Saves, you’ll want to equip the best versions of the Amulet of Natural Armor, Ring of Protection, and Cloak of Resistance.

In order to raise your Attributes and its respective modifiers, you’ll need to wear the Headband of Alluring Charisma as well as the Belt of Physical Form. These provide you with Enhancement Bonuses, particularly for Charisma, Dexterity and Constitution. Lastly, since you can’t wear Armor, you can choose any Clothing that provides you with decent bonuses such as the Silver Robe.

Ember’s Stigmatized Witch and Crossblooded Sorcerer Build may seem confusing at first but remember that you’ll only have to focus on a handful of Spells to deal significant damage. You’ll then supplement these with Hexes. It’s also essential to prioritize Spell Penetration over Spell Focus since you’ll also face demons with Spell Resistances right from the start. As such, you’ll be needing the Caster Level Check Bonus you get to overcome these resistances. 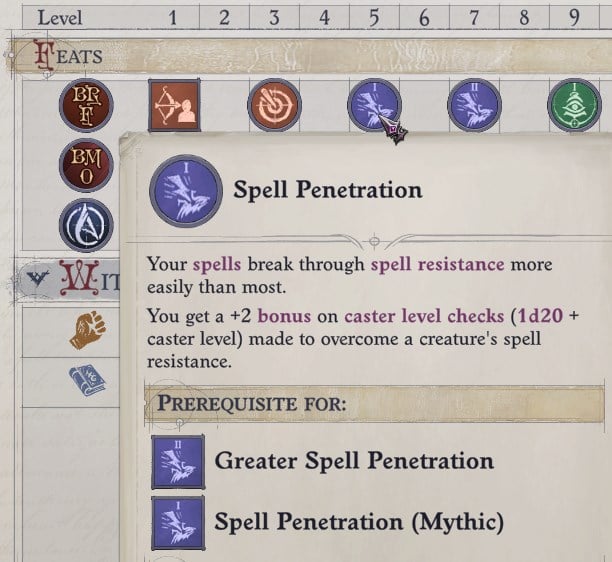 Note that the earlier versions of Inflict Wounds require you to approach your target to cast it. If you find yourself getting hit too often because of this, it’s also good to take Dodge and the Combat Mobility Feat somewhere between Levels 5 to 9. You can then continue with the Feats I suggested and remove Toughness from the list.

Lastly, remember that the Undead are different from the rest of the creatures you’ll come across. This means that you can heal them with Spells that are powered by Negative Energy such as Inflict Wounds, whereas you’re able to damage them with healing Spells like Cure Wounds.