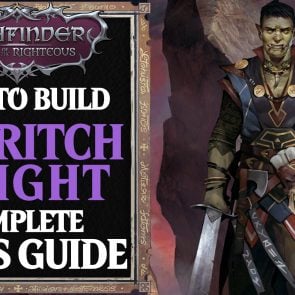 From Levels 1 to 10, we’re going to start leveling up our Magus Destroyer as an Eldritch Archer. Eldritch Archers specialize in dealing Ranged Touch Attack or Ray Spells and normal attacks in a single turn thanks to Ranged Spell Combat as well as Ranged Spellstrike. This is initialized when you perform a Full Attack, which means you can’t make a Standard nor Movement Action in that same turn. 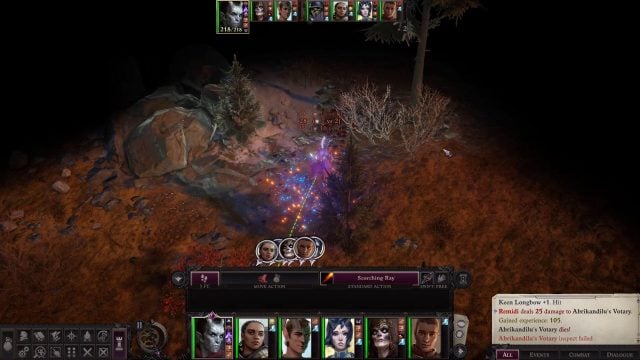 Ranged Spell Combat allows you to wield Bows without needing a free hand to cast Spells while Ranged Spellstrike raises the number of attacks you’re able to perform to 7 from the default of 5 at Level 20. At Level 8, you gain Improved Spell Combat, which grants additional bonuses on Concentration Checks, thereby enhancing the chances of casting Spells continuously regardless of whether or not you’re threatened by incoming Attacks of Opportunity. 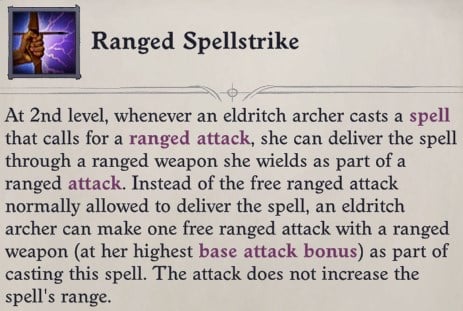 When it comes to Magus Proficiencies, you can wear Light Armor by default. At Level 7, however, you obtain a new Armor Proficiency due to Arcane Medium Armor. Wearing Medium Armor improves your defenses, making you survive longer in Combat. You also don’t incur Spell Failure Chances regardless of wielding this Armor Type.

Up to Level 10, you have the benefit of receiving Magus Abilities such as Arcane Weapon and Spell Recall. Arcane Weapon provides you with Weapon Enhancement Bonuses to improve your Attack and Damage Rolls. To use this, you consume points from your Arcane Pool that is equivalent to ½ Magus Level + Intelligence Modifier. 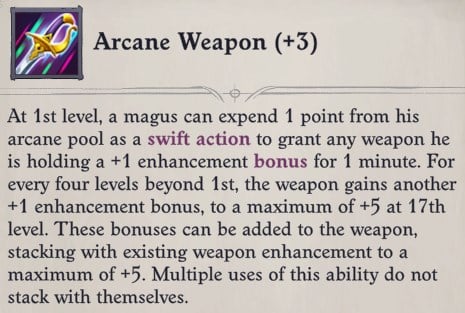 You’ll have to activate it prior to the start of any encounter since your Attack Rolls suffer from penalties as a result of Ranged Spellstrike and Rapid Shot. Note that you’ll be selecting Rapid Shot as a Magus Bonus Feat at Level 5. Meanwhile, Spell Recall lets you use expended Spells without needing to rest beforehand. It’s a Swift Action, which means that you can cast the Spell you just restored in the same turn.

At Levels 3, 6 and 9, you’ll choose specific Magus Arcanas to further enhance the attacks and damage you inflict. For this, it’s best to select Arcane Accuracy, Empowered Magic, and Ghost Blade, respectively. Arcane Accuracy adds your Intelligence Bonus to your Attack Rolls so you miss less often. Empowered Magic acts like the Metamagic (Empower) Feat such that you can cast Spells at higher levels to deal much more damage. And finally, Ghost Blade allows you to imbue the Ghost Touch or Brilliant Energy Properties onto your Ranged Weapon for the purposes of bypassing your target’s Race as well as their Armor and Shield Bonuses. 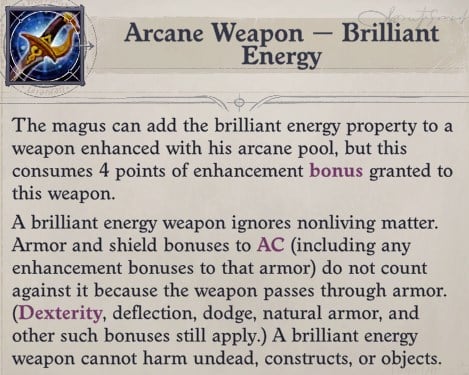 From Levels 11 to 20, we’ll be multiclassing with the Eldritch Knight Prestige Class. What’s great about the Eldritch Knight is it allows us to continuously gain Magus Spells at higher levels as if we were leveling up as an Eldritch Archer. This Class also provides us with 3 extra Feats and faster Base Attack Bonuses (BAB), which boosts our Attack Rolls. 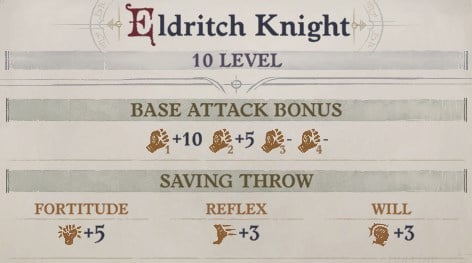 For Feats, you ought to choose Weapon Specialization (Long Bow), Clustered Shots, and Penetrating Strike at Levels 11, 15 and 19. These improve your Damage Rolls and total damage when making a Full Attack, which is always the case with this Magus Build. We’re going to opt with the Longbow instead of a Shortbow because it provides greater damage. You don’t need a Composite Longbow since your Strength Modifier is 0.

The best Race for this Eldritch Archer Magus Build is the Tiefling because it grants you basic resistances against Cold, Fire and Electricity Damage. You should also choose the Grimspawn (Daemon-Spawn) Heritage. This grants you bonuses to Trickery and Persuasion Skills as well as Dexterity and Intelligence, which are the primary Attributes of your character. In terms of the Background, it’s better to select the Hunter Wanderer to receive a +1 Enhancement Bonus on Attack Rolls when wielding Longbows. 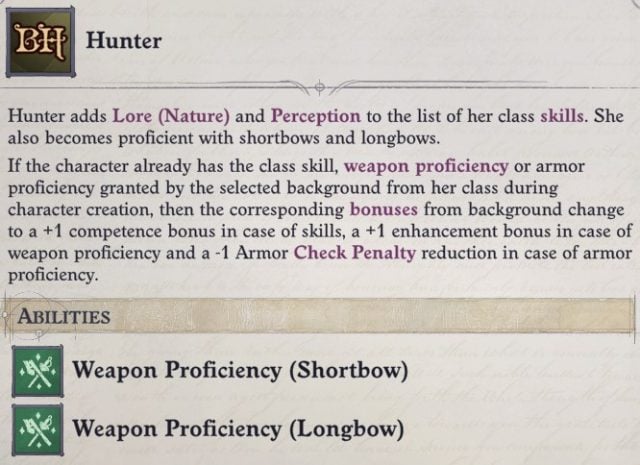 In Character Creation, you’ll want to allocate points to the following Attributes: 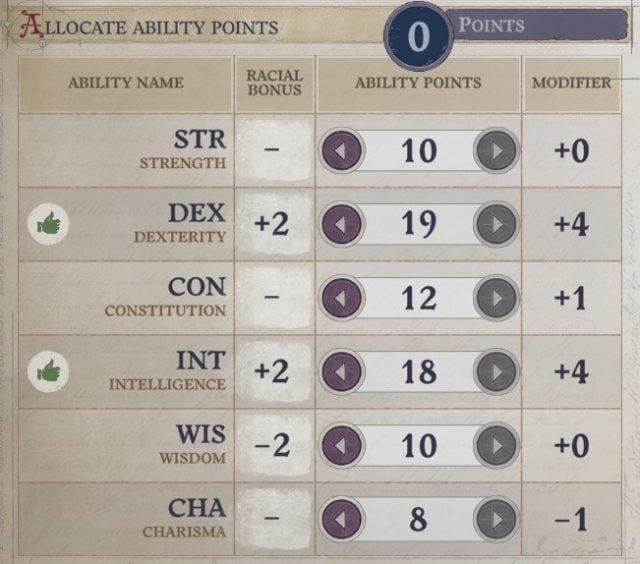 Starting at Level 4 and after every four levels, you’ll be able to add 1 point to any of your Attributes. For this Build, you’ll only raise Dexterity to improve your chances of successfully hitting enemies from a distance. You also enhance your Armor Class (AC) and Reflex Saves for better survivability. In total, you’ll get 24 Dexterity with a modifier of +7. On the other hand, Intelligence is your Spellcasting Ability, which is needed to cast Spells. You can enhance this by wearing the Headband of Vast Intelligence. 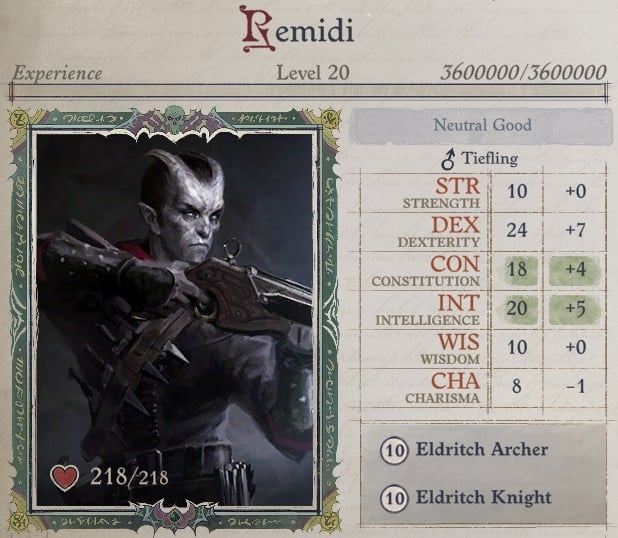 For Skills, you’ll want to invest in Mobility, Trickery, Stealth and Knowledge (Arcana) even at the beginning due to the bonuses you initially receive. Trickery is a must-have Skill since there are a lot of traps to disarm and locked chests to uncover in Pathfinder Wrath of the Righteous. Meanwhile, Knowledge (Arcana) lets you readily identify mysterious objects and Equipment, which may be useful to you and the party.

From Levels 1 to 19, you’ll be able to choose 10 Regular Feats for your Magus Destroyer with 1 Feat at every other level. You’ll focus on acquiring as many Attack and Damage Roll Bonuses while raising the chances of executing Critical Hits. 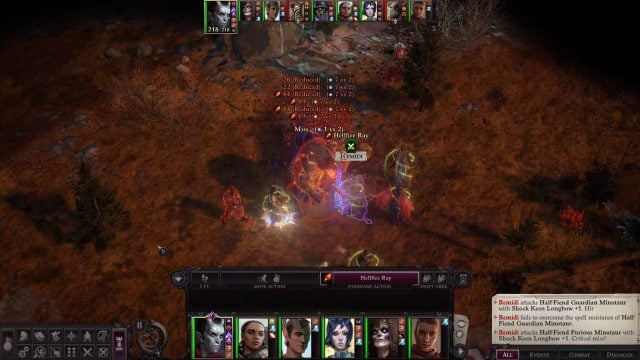 What you want with these Feats is to accumulate as many Attack Roll Bonuses as possible to take advantage of the damage you can inflict especially since you’ll be hitting enemies 7 times per turn. 6 attacks come from your Longbow while 1 attack is from your Ray Spell. The bonuses you get from Point-Blank Shot, Precise Shot, Weapon Focus, and Greater Weapon Focus partially counter the attack penalties from Deadly Aim. In spite of this, Deadly Aim is a powerfully decent Feat because of the cumulative Damage Roll Bonuses you obtain.

As an Eldritch Archer, one of the most essential Feats you should acquire at earlier levels is Arcane Strike. Arcane Strike is a Swift Action that not only grants you +5 damage at Level 20, but it also imbues your Longbow with the Magic Property to bypass the target’s Damage Reduction (DR). As such, they receive the full brunt of your attack. 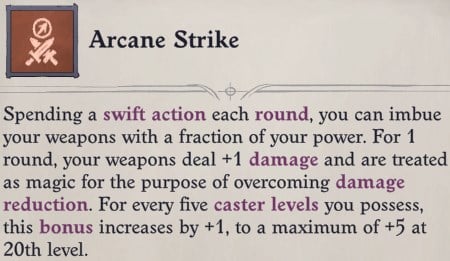 Another reason why the Eldritch Knight is the best Archetype to multiclass with is that it opens up specific Fighter Feats like Greater Weapon Focus and Greater Weapon Specialization. You’ll need both to further enhance your attacks and damage when wielding Longbows. 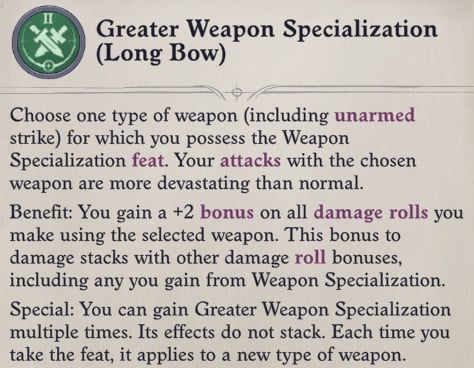 When it comes to Spells, you’ll want to focus on Ray Spells, which you’re able to cast from a distance. This way, you can make a Full Attack from wherever you are in order to trigger Ranged Spellstrike to deal lethal damage. More often than not, you can instantly obliterate targets. Specifically, the best Ray Spells that inflict great damage are Scorching Ray, Hellfire Ray, and Disintegrate. Hellfire Ray is the upgraded version of Scorching Ray in that you hit enemies 6 times with Fire and Unholy Power Damage. So even if they’re fire resistant, you’ll still deal decent damage. 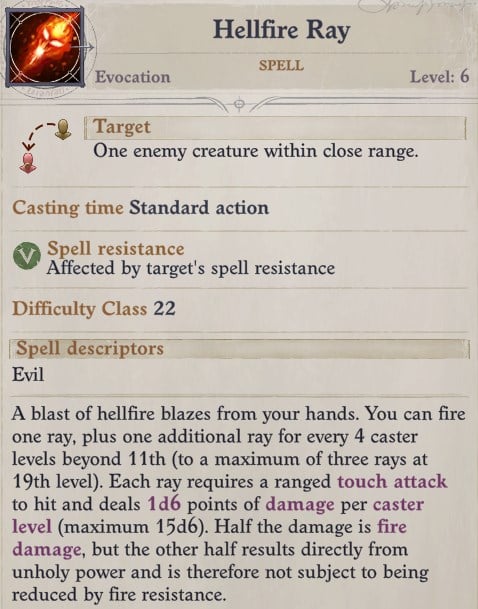 Disintegrate, on the other hand, allows you to inflict a maximum of 38d6 damage, which is based on your Caster Level. You can also choose secondary Ray Spells like the Ray of Enfeeblement, Ray of Exhaustion, and Acid Arrow to either penalize the enemy’s Attribute points or deal additional damage over time.

On top of these Offensive Spells, you’ll have to take Non-Damage Spells, which serve as buffs or extra protection considering that your AC won’t be as high as 40. The ones you’re going to prepare include:

Cat’s Grace significantly increases your Dexterity due to the Enhancement Bonuses it provides, thereby raising your Attack Rolls, AC, and Reflex Saves. Another worthy buff is Haste because it gives nearly the same bonuses as Cat’s Grace, including granting you an extra attack since you’re able to act fast during your turn. 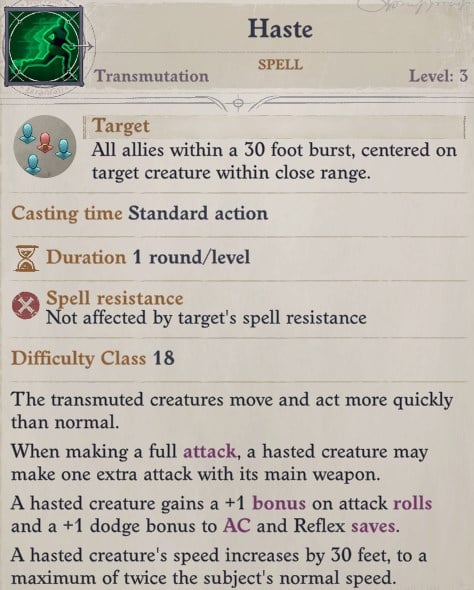 Lastly, there’s Greater Invisibility to make you invisible for a period of time. Unlike the Invisibility Spell, you remain totally concealed even when you attack a target.

For this Build, you can choose any Mythic Path depending on your roleplaying preference. You should, however, pick these 10 Mythic Abilities and Feats to enhance your Magus Destroyer’s offensive capabilities:

You’ll first have to increase the number of your Spell Slots for Levels 1 to 6 Spells since they’re pretty limited to begin with. It’s also important to select Ranging Shots so you can take advantage of your missed hits by turning them into Attack Roll Bonuses when facing the same target. Lastly, with Expose Vulnerability, you inflict additional Divine Damage upon hitting your enemy a third time, which always happens given that you deal multiple attacks per turn.

For Mythic Feats, you’ll want to select the following:

The majority of these Feats enhances your attacks, damage and Critical Hit multiplier. On the other hand, Rapid Shot (Mythic) and Flawless Attacks remove and reduce the Attack Roll penalties you take from Rapid Shot and Deadly Aim, respectively.

In terms of your Magus Destroyer’s Weapon, you can choose any Longbow with at least an Enhancement Bonus for attacks and damage like the Shock Keen Longbow +1. It doesn’t have to be composite in nature since you don’t have Strength Bonus to add to your Damage Rolls. For your Medium Armor, it’s good to equip the Mithral Breastplate because it provides decent AC and Max Dexterity. 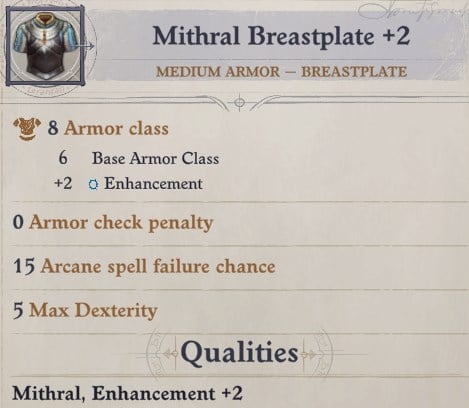 Next, remember to wear the Cloak of Resistance, Ring of Protection, and Amulet of Natural Armor to improve your defenses even more. You don’t have to worry about stacking bonus issues since none of these items conflicts with any of your buffs. Additionally, you’ll want to raise your max HP for better survivability so make sure to purchase the Belt of Mighty Constitution from Wilcer Garms in Drezen. Finally, the Headband of Vast Intelligence and Goggles of Pure Sight both enhance your Concentration and Spell Penetration for the purposes of overcoming Spell Resistance and inflicting full damage.

The Eldritch Archer Magus Build is fairly straightforward. It works best when you first buff yourself personally in order to boost your Dexterity and defenses, followed by using Arcane Weapon Enhancement or Arcane Strike. Do make sure that both Spell Combat and Spellstrike are active to utilize powerful and cumulative attacks from your Spells and Ranged Weapon. 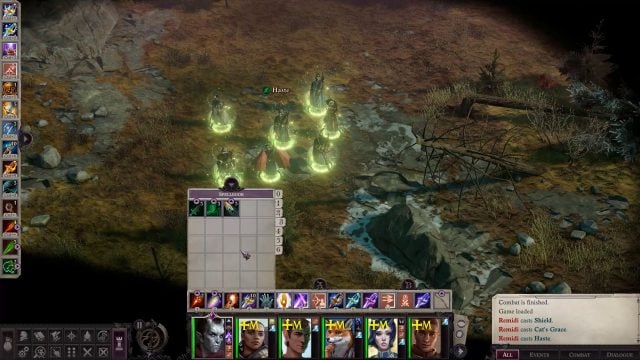 At Level 20, you gain Spell Critical, which is a passive Ability. It lets you cast whatever succeeding Spell you want as a Swift Action, provided that you initially inflict Critical Damage against an enemy in the previous round.

Lastly, test out the other items you intend to wear alongside the buffs you cast. If they provide the same bonus type, neither of them will stack with one other and it would just be a waste. One example is the Belt of Physical Form, which provides lesser Dexterity Enhancement Bonuses compared to Cat’s Grace, unless you happen to obtain the Belt’s +6 Version. 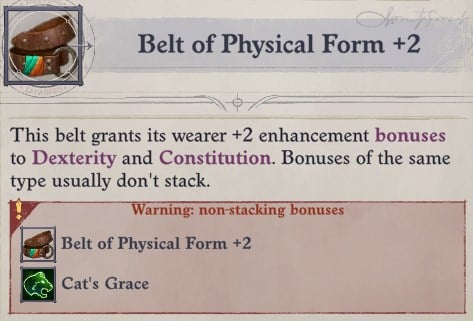 Stay tuned for more Class Build Guides and be sure to check our Twitch Channel or the Pathfinder: Wrath of the Righteous Wiki if you have questions on the game! Be sure to check out our other Pathfinder Wrath of the Righteous Guides like the Bloodrager Class, Arcanist Class, Cavalier Class, Top 5 Archer Builds, Best Class to Play, Delamere, Arueshalae, Greybor, Regill, Sosiel, Woljif, Daeran, Wenduag, Ember, Nenio, Lann, Seelah, Camellia, and Beginner’s Guide!