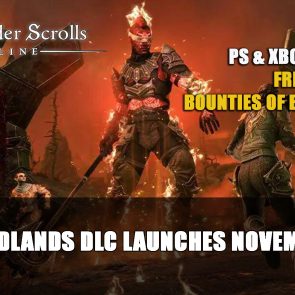 Bethesda has revealed that the end of the Gates of Oblivion year-long content for the Elder Scroll Online comes to end with the release of the Deadlands DLC on November 1st.

During the livestream over the weekend, Zenimax revealed that the next DLC Deadlands will be launching on PC, Mac and Stadia on November 1st. The DLC will hit consoles Playstation and Xbox on November 16th.

The final DLC will round up the year-long Gates of Oblivion content. Deadlands will introduce new areas part of the Daedric realm of Mehrunes Dagon including the Fleapit. This includes new Delves to explore. The zone DLC will be of similar size to previous DLC zones such as Markarth or Dragonhold. In Deadlands players will be able to explore the Prince of Destruction’s realm of Oblivion. This will give players a chance to explore a Deadric realm for the first time in an explorable zone in-game.

The developer team has also announced that players can also gain the Deadlands DLC for free by completing the Bounties of Blackwood pathfinder achievement for anyone who already owns the latest chapter. Other achievements to unlock include the Pellucid Swamp Jelly Pet and Shadows of Blackwood Markings. You can check out the event progress on the official ESO website, the 100% mark will grant the DLC for those who take part.

Previously it was revealed the new features coming with Update 32, which is a free update for the base game arriving alongside Deadlands. This includes a new Armory system, DLSS, item set curation for RNG, quality of life improvements and more.

Elder Scrolls Online Deadlands will release on PC, Mac and Stadia on November 1st. Coming to consoles Playstation and Xbox on November 16th. The DLC will be free by completing the Bounties of Blackwood community event.