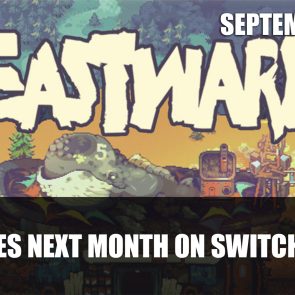 The 2D pixel art RPG Eastward will be releasing this September as a timed console Nintendo Switch exclusive and on PC.

Publisher Chucklefish and developer Pixpil have announced the 2D pixel adventure RPG Eastward will be launching on September 16th as a Nintendo Switch time console exclusive, as well as releasing on PC.

After spending about two years in development the title is finally launching. It draws inspiration from Japanese RPGs, but combining influence from Asia architecture and culture, from such places as Hong Kong, South Korea, Shanghai and India. Other inspirations include Zelda, Earthbound and Studio Ghibli.

The story of Eastward follows a miner and a mysteriously powerful girl who takes off on an adventure across the country on a train journey, in a land now toxic. The action gameplay involves switching weapons best to challenge your foes, and switching between characters to defeat environmental puzzles. Players can explore, find items, and also cook. Chucklefish estimates players will take about 30 hours to complete the game.

Eastward also is expected to come with a stellar soundtrack, as composer Joel Corelitz who worked on Death Stranding, Hohokum and The Unfinished Swan.

Eastward will be releasing on both Steam and Nintendo Switch on September 16th with pre-orders now available.

For more news find it here in Tales Of Arise Will Get A Playstation And Xbox Demo Next Week and Pathfinder Wrath Of The Righteous Console Release Confirmed For March 1st 2022.