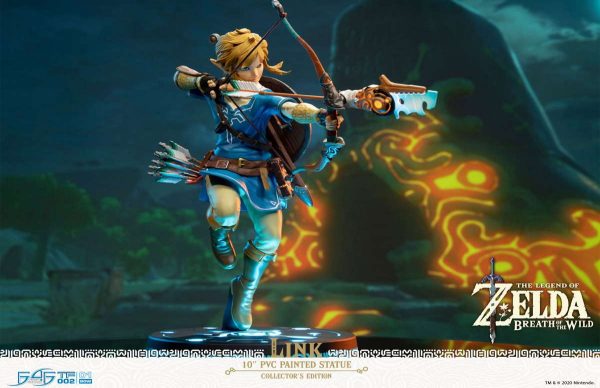 I’ve always love figurines, though I’ve never bought any myself. First 4 Figures are some of the best figurine makers around, and right now, you can pre-order them now.

Currently, there are four First 4 Figures Zelda statues you can pick up! The two statues due out in May are of Link and Zelda, respectively. Link gets a dynamic pose with the bow for this statue, while Zelda is a bit more static pose. The neat thing about both of these statues is the LED lights, highlighting certain parts of each statue in blue light. It really looks neat. You can pick up these statues for $99.99 each at Entertainment Earth, and you get free shipping within the US.

But, if you’re up on your figurine news, you’ll know that those two statues have been available for pre-order for a bit now. The new statues to join the First 4 Figures Zelda line are the Revali statues. In what I assume to be the first of the Four Champion statues, Revali comes with two editions–the Standard and Collector’s Edition. The Collector’s Edition comes with the same LED lights that the Link and Zelda statues have. The Standard Edition nixes the LEDs and lets you save a little money in the process!

These statues are set to release in October. It’s a while away, but better to get your pre-order in now than forgetting about it and regretting it later.

Want to know about all the hot gaming deals as they’re happening? Give Jelly Deals a follow on Twitter! Or, head over to the Jelly Deals site for regular buyer’s guides and features on all sorts of tech, entertainment, and more.

The post Don’t miss out on pre-ordering these Breath of the Wild statues from First 4 Figures appeared first on VG247.