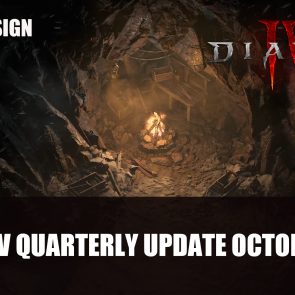 Blizard have released their quarterly update on the development for Diablo IV which focuses on sound design.

The latest quarterly update for Diablo IV has been released by Blizzard. This segment focuses on sound design, providing a behind the scenes into what goes into it. The post also reaffirms their commitment to the game. This post is also from Joe Shely is now the game director of Diablo 4.

In this latest iteration of Diablo, the sound team have been working on the soundtrack which will provide much ambience to the feel of the game. A track has been released which features the hollowing wings of the Fractured Peaks, the video is almost an hour-long accompanied by a campfire somewhere on the mountainous region covered by snow.

Another part of the post talks about what is going into the fire skills, which includes capturing those perfect flame sounds which meant travelling to the deserts of California. They also talk about fire recordings for the Inferno Sorcerer skill, which sounds like they are trying to get the sound as authentic as possible for Diablo IV for a truly immersive experience.

The blog post goes into detail about everything you’d expect to hear in a Diablo game, monster sounds, dungeon ambience, and even open-world ambience. While the tracks provided are for fans to listen to hear how the game is progressing, the developer also wants fans to use them for their tabletop RPG sessions which is also a cool idea if you’re getting a game together and need some ambient sounds.

There is also an update on the challenges the devs are facing with the isometric camera. This means getting the right mix of the battlefield being able to be seen in a certain range, the audio for the monsters, and not having the sound being “feel too cluttered”.

The post rounds things up with what the team are currently focusing on now which is the endgame and different visual effects. While this update isn’t as revealing as the previous in terms of content, it is kind of cool to see what goes into getting sounds for the game.

If you want more Diablo IV be sure to drop by our Diablo IV wiki for all the latest info. If you want to catch up on the previous Diablo IV dev update find it here in Diablo 4 Quarterly Update June 2021 | Character Customization And Monster Design.

For more news find it here in Tales Of Arise Adds New Difficulties And Premium Sword Art Online DLC and Baldur’s Gate 3 Next Playable Class Is The Sorcerer.