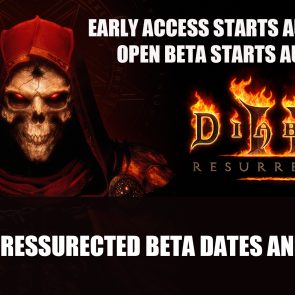 Blizzard have finally unveiled the dates for the open beta for Diablo 2: Resurrected on the official Blizzard website. Those who pre-order the game will have early access on August 13th at 1 PM. EDT/10 AM PDT. This will be followed by a Public Open Beta weekend starting on August 20th. Those who pre-order Diablo 2: Resurrected or the Diablo Prime Evil Collection will be able to play in the first beta.

As for what you will be able to access, similar to the technical alpha players will be able to play the first two acts but with no level cap. The multiplayer beta will only be available for certain platforms, featuring 5 of the 7 classes which are Amazon, Barbarian, Paladin, Sorceress, and Druid. Players can enjoy up to 8 player co-op, or go it alone as a solo experience.

Both weekends will be open to all consoles except for Switch, so that means you can play on PlayStation 4, PlayStation 5, Windows PC, Xbox One, and Xbox Series X versions. The cross-progression support can also be tested during this beta.

The road to launch begins.

Diablo 2 Resurrected will be launching on September 23rd on PC, Xbox One, Xbox Series X|S, PlayStation 4, PlayStation 5, and Nintendo Switch with pre-orders already available. The pre-order early access will be held on August 13th and public open beta will start August 20th.

For more news find it here in Microsoft Announces Gamescom 2021 Xbox Livestream and Future Games Show To Feature Over 40 Games At Gamescom 2021.