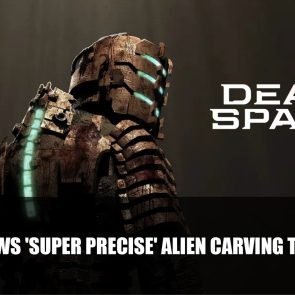 The Dead Space Remake livestream previewed some behind the scenes as well as sharing more about the additions to the upcoming remake.

Electronic Arts and developer Motive Studio gave Dead Space fans a closer look at the remake during the developer livesteam today. The devs previewed some early footage of the upcoming action-horror title.

The livestream which was hosted by Philippe Ducharme and creative director Roman Campos-Oriola, previewed some very early footage of the remake. While it wasn’t exactly a gameplay reveal, it did go over the overall approach to the remake with some behind-the-scenes.

Campos-Oriola shared “One thing that’s important for us…it’s not about one thing. It’s really about improving on a lot of different elements to create that original but still new experience.”

They also plan to “stay true to the original” according to Ducharme. This is apparent by the fact that Gunner Wright who voiced the original protagonist Isaac Clarke, will reprise their same role in the remake. Also EA Motive shared the “cut off limbs” feature that has been well known in the series will be in the remake which was demonstrated during the stream. The new system will be a little more complex than the original, showing flesh being stripped from limbs as you shoot, so players can gauge their damage progress. This will make weak points a little more organic and more natural to the game.

Another cool feature previewed is that the game will have zero-G controls, which will let you float, which is similar to the game’s sequels. The remake will add more free motion.

As for the story, while the Dead Space story will remain the same, it will be enriched, adding “further story or narrative”. Campos-Oriola explained they want more tie ins with what came after the game such as books, anime, or even Dead Space 2, making for a more rounder Dead Space universe experience.

The Dead Space remake will take advantage of modern-day systems utilising “super-fast SSD” meaning faster load and unload speeds. The game will offer a “fully unbroken experience” according to EA’s blog post, with “an uninterrupted sequence shot, from the start screen to the end credit, without interruption.” Fans will also be happy to know there will be no microtransactions in sight.

The Dead Space series has three main games launched between 2008 and 2013. The franchise also gained a few spin-offs including the puzzle-action game Dead Space Ignition and the rail shooter Dead Space Extractions. The main entries of the series are based on the 26th century featuring Isaac Clarke who fights undead beings known as Necromorphs.

For more news be sure to check out next EA Teases Dead Space Remake ‘Early Look’ In Livestream and Black Geyser: Couriers Of Darkness Has Now Entered Early Access. Interested in what’s releasing this month? Check out our Top 5 Upcoming RPGs Of September 2021.