The post Dark Alliance Will Get Split-Screen Co-op After Launch; First Free DLC This Summer appeared first on Fextralife. 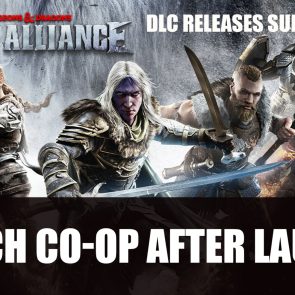 Dark Alliance will be getting couch split-screen co-op after the game launches. Developers also mention the first free DLC will be releasing this summer.

Dark Alliance Will Get Split-Screen Co-op After Launch

The Action-RPG Dungeon’s & Dragons: Dark Alliance will be launching this month with online co-op. But developer Tuque Games have now announced that after listening to fans they will be adding split-screen co-op, so players can team up offline as well as online. They’re latest tweet on the subject also mentions that this will arrive hopefully with the free DLC that is launching this summer. What the DLC will contain is currently unknown but it’s great to know more content will be releasing after the launch.

Dark Alliance was announced to be release on June 22nd earlier this year, taking an over the shoulder approach to combat rather than top down. Gameplay offers all the button mashing you could want, but also offers an experience that lets players master both the strengths and weakness of each attack, ability and combo. You can apply guard breaks, team attacks and pull off executions.

Just announced on the Dev Stream: We heard you loud and clear.

We’re working to have this ready for our first free DLC this summer. pic.twitter.com/WkoFimeBHi

Previously Tuque Games released a trailer for a boss battle against The Beholder, Hagedorn. We also go a hands-on look at the game, you can find out more here in Dark Alliance Gameplay And Hands-On .Impressions.

For more news find it here in Rumour: Bloodstained Ritual Of The Night Sequel Could Be In Development and Tales Of Arise Gets Mystic Artes Trailer. You can also find out why Dark Alliance made our Top 5 Upcoming RPGs Of June 2021 here.

The post Dark Alliance Will Get Split-Screen Co-op After Launch; First Free DLC This Summer appeared first on Fextralife.