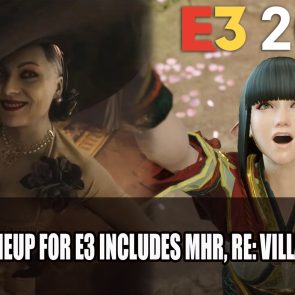 Cacpcom have announced their lineup for E3 2021 which will focus on upcoming games Monster Hunter Stories 2, The Great Ace Attorney Chornicles, as well as current releases Monster Hunter Rise and more.

Capcom has release their lineup for E3 2021 which includes current releases Monster Hunter Rise and Resident Evil Village. Other titles include upcoming games such as Monster Hunter Stories 2 and The Great Ace Attorney Chronicles.

The Capcom live stream will take places on June 14th at 2:30PM PDT. The news was announced their official Twitter account.

Join us for the Capcom showcase at #E32021 for news on our latest games lineup, including:

The announcement video included in the tweet didn’t include any hints or teases of what’s to come but Capcom already held their Monster Hunter Rise and Monster Hunter Stories 2: Wings of Ruin live stream not too long ago which outlined some content.

In case you missed it Capcom held their live stream covering update 3.0 which released for Monster Hunter Rise at the end of last month. It included a roadmap for upcoming content for the game, with the next update coming mid-June for the first crossover with Monster Hunter Stories 2, a DLC and more Event Quests for ver.3.1 at the end of June. At the end of July and for August there will be another couple of Capcom collabs, DLC and more Event Quests. We might be hearing more about future updates as MHR or the exact release date for the next update set for mid-June.

Monster Hunter Stories 2: Wings of Ruin also received some details including how Rite of Channeling works, a sort of DNA transfer system. It also featured Frostfang with Avinia.

As for Resident Evil Village a DLC wouldn’t be too surprising, maybe new challenges to face off against fan favourite Lady Dimitrescu? Maybe some new Mercenaries mode updates.

There also isn’t an exact release date for Resident Evil Re: Verse, the multiplayer versus game which pits four to six players in a survival horror revenge match, with the choice of your favourite Resident Evil characters including Claire Redfield, Leon and more. Slated for summer 2021, we could be getting a release date at E3, which is promised as a free addition for those who purchase RE: Village.

The Great Ace Attorney Chronicles is already set to release on July 29th, so a closer look at the upcoming game seems to be on the cards.