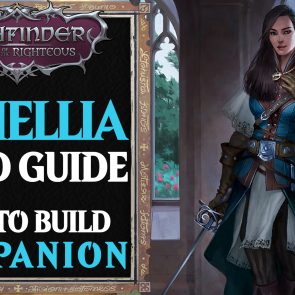 In this Camellia Pathfinder: Wrath of the Righteous Companion Build Guide, I’m going to break down the best Attributes, Skills, Feats, Spells, Hexes, Mythic Path, and Equipment you should focus on to maximize Camellia’s damage-dealing and support hybrid Build. I’ll be showing an effective way to multiclass with the Cleric to gain additional healing Abilities. If you’re looking for a way to deal good Melee Damage with enchanted Weapons while buffing and healing the party, then this guide is for you. 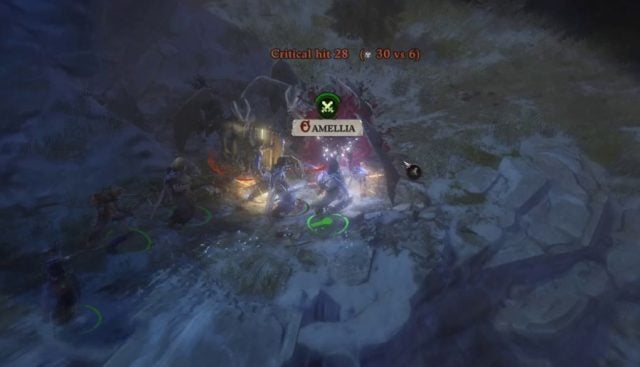 Camellia’s Build focuses on wielding 2 Rapiers while buffing one of these Weapons to improve and alter it’s damage type. Aside from her Martial prowess, she also provides adequate support to the party. 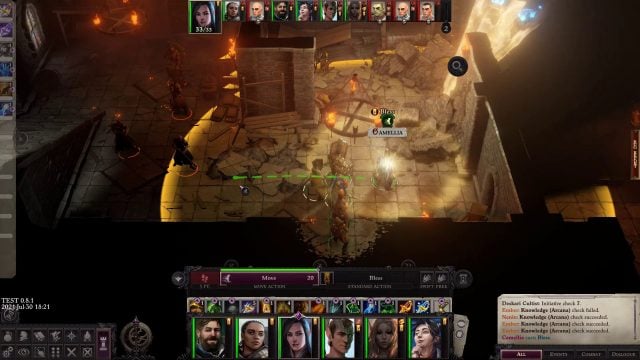 Multiclassing with the Cleric Angelfire Apostle Subclass for 3 levels provides her with Channel Positive Energy. With this Ability, Camellia is able to mass heal her allies or damage Undead enemies in one action. 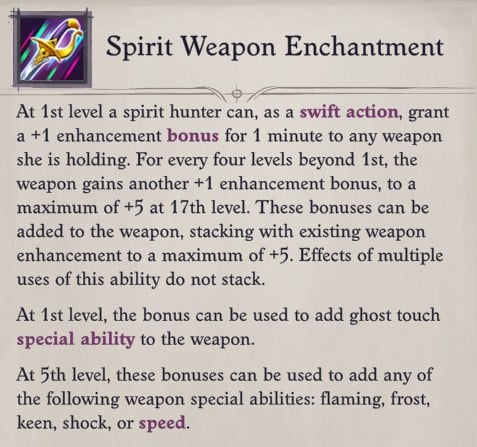 At higher levels, you’re able to change the damage type of your Rapier. For instance, you can deal extra Fire or Cold Damage with Flaming or Frost Spirit Enchantments. Meanwhile, Ghost Touch is advantageous against incorporeal creatures like the Undead. It lets you deal damage normally and execute Critical Hits as if they had physical bodies without the 50% Damage Reduction (DR).

Starting at Level 4 and after every four levels after that, you’ll be able to add 1 point to any of your Attributes. Overall, Camellia has a well-balanced Attribute Spread. For instance, her Wisdom and Dexterity are 16 and 19, respectively, the moment you recruit her. At Levels 4 and 8, you’ll want to increase Wisdom by 2 to raise its corresponding modifier to +4. This is the Shaman and Cleric’s Spellcasting Ability Modifier, which helps in increasing the number of bonus Spells she’s able to cast per day. Furthermore, it also boosts her Spell’s Difficulty Class (DC), which is what enemies have to overcome to reduce the effectiveness of her Spells against them. 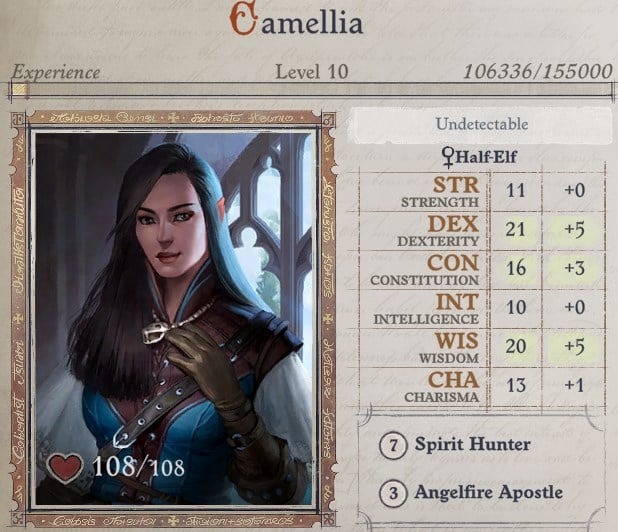 Next, you’ll allocate 1 point into Dexterity at Level 12 to increase its modifier to +5. You’ll also be equipping the Belt of Physical Form +2 to attain 22 Dexterity with a modifier of +6. With these boosts, you’ll greatly benefit from the Weapon Finesse Feat, which allows you to add your Dexterity Modifier to your Attack Rolls instead of the 0 Strength Modifier.

As such, you increase your chances of successfully hitting enemies with your Rapiers at point-blank range. This high Dexterity Modifier is also useful to improve your AC and defenses from attacks, as well as the accuracy of any Ranged Touch Attacks y0u may use.

Lastly, at Levels 16 and 20, you’ll invest your final points into Constitution to raise your max HP. You’ll then receive an extra +2 Enhancement Bonus from the same Belt of Physical Form +2, thereby raising this Attribute to 18.

In terms of Camellia’s Skills, you’ll want to focus on Trickery and Perception. Having at least one ally who is an expert in Trickery prevents your party from walking into traps while letting you obtain notable loot hidden in locked chests, both of which are numerous in the game. You also receive additional success bonuses due to your Dexterity Modifier. 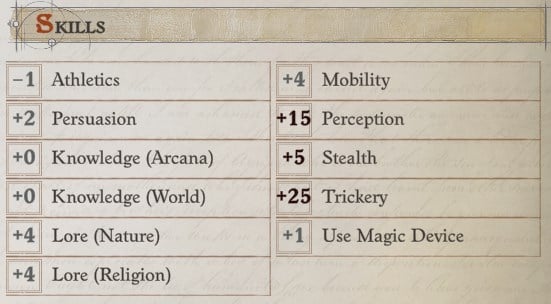 Next is Perception, which is further enhanced by your Wisdom Modifier. This pairs very well with Trickery because it helps Camellia detect any type of danger such as hidden traps. Additionally, Perception helps in reducing the chances of being surprised by enemies when your entire party is resting. This means that they don’t get the advantage of attacking you for one full round while you wait to retaliate in the succeeding rounds.

From Levels 3 to 20, you’ll be able to choose 9 Feats for Camellia with 1 Feat at every other level. You’ll focus on dealing damage with your Rapiers, offensive Spells, and hexes while supporting the party with buffs and heals. This hybrid Build is useful especially if you don’t have a pure healer like a Cleric with you. 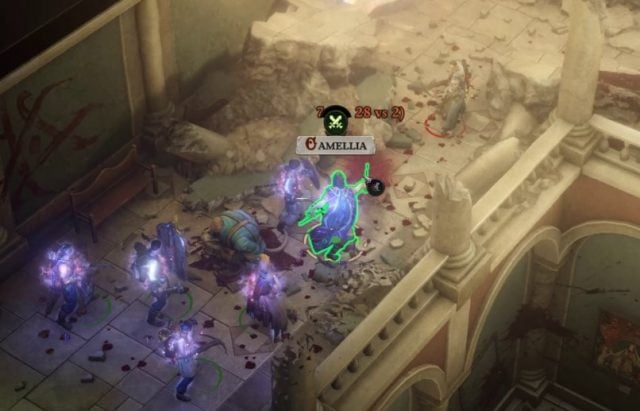 Alternatively, you can try and take other Feats in the order you prefer:

As a Shaman and Cleric, you’re going to buff the party before the start of an encounter so you can perform other actions once it begins. For the Shaman, you’ll want Spells like Bless, Barkskin and Protection from Energy. Bless grants you and your allies +1 Morale Bonus on Attack Rolls and Saving Throws against fear. Barkskin provides the target with an Enhancement Bonus that’s dependent on Camellia’s Caster Level. However, this doesn’t stack with Accessories that provide a Natural Armor Enhancement Bonus to AC so it’s best to cast Barkskin when you don’t have these gears yet. 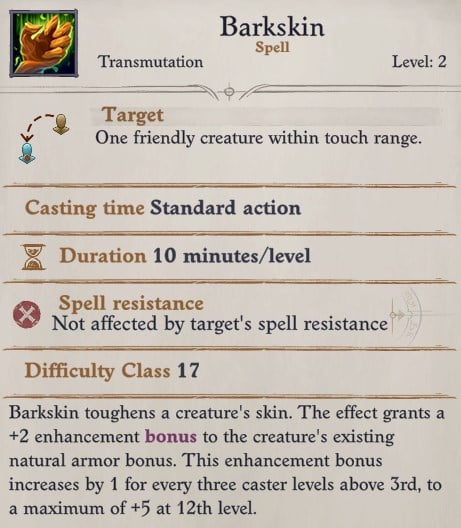 Protection from Energy grants you and your allies temporary immunity from a specific Energy Type may it be against fire or acid. Furthermore, you’re protected from more Spell Damage of the same energy if your Caster Level is high. On top of buffs, you’ll want to invest in the different stages of Cure Wounds Spells to efficiently heal your party.

When it comes to an enemy debuff, you’ll want to get Sleep, which is very effective against Humans like Baphomet Cultists. Next, you’ll have to obtain Remove Fear, which you’ll mostly encounter at earlier levels. Restoration and Dispel Magic are also essential in removing any negative effects you or your allies may have received in combat. If you have other Support Classes in the party, you can opt to get Remove Spells like Remove Curse, Disease or Blindness.

Given that you’ll mostly face enemies at point-blank range, the best single-target and AoE offensive Spells to prepare are Inflict Wounds and Burning Hands, respectively. Both Spells become more potent at higher Caster Levels. Inflict Wounds allows you to deal Negative Energy Damage against any other enemy except for the Undead, which you’ll otherwise end up curing. 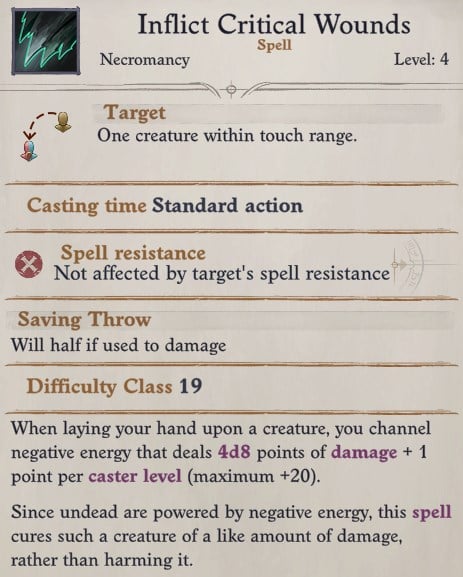 At Level 6, you’ll start multiclassing with the Cleric Class where the goal is to reach three levels to gain additional Spells. I highly recommend reaching Level 17 for Camellia’s Shaman Spirit Hunter Subclass in order to maximize the Spirit Weapon Enchantment Ability. This further improves the damage inflicted with the Rapier.

For buffs, it’s best to take Divine Favor and Align Weapon. Divine Favor can only be used for Camellia. This improves her hits and Weapon Damage due to the Luck Bonus she receives. Meanwhile, Align Weapon changes her Rapier’s alignment to overcome the enemy’s DR.

Finally, for Offensive Spells, the good ones to obtain are Scorching Ray, Boneshaker, and Sound Burst. Scorching Ray is a potent Fire Spell, which is quite similar to Magic Missile in terms of its power and the projectiles or rays you use to damage a target. Boneshaker lets you control the skeleton of your enemy to engage in deadly self-harm. Lastly, you can stun a target for 1 round if they fail their Fortitude Saving Throw while dealing Sonic Damage. 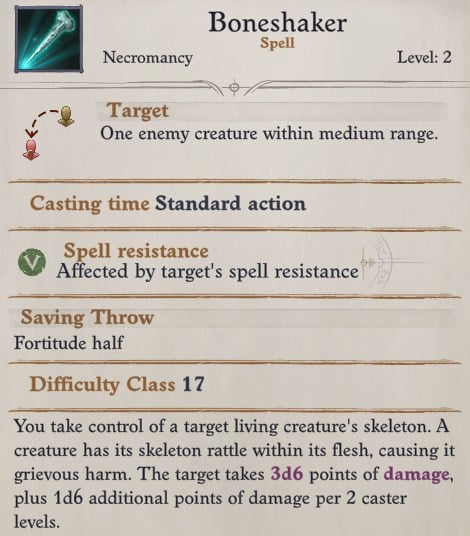 Due to multiclassing, you’re able to choose 6 Hexes for Camellia at different levels. Similar to important Feats, it’s best to take five of these in order. For the last one, you can choose any Hex that fits your playstyle.

For Mythic Feats, you ought to get Weapon Finesse (Mythic), which allows you to use your Dexterity Modifier in place of the Strength Modifier, on your Damage Rolls to make your damage much more potent. To further maximize your chances of inflicting better damage, you’ll have to obtain Piranha Strike (Mythic).

On the other hand, to rack up extra bonuses on your Attack Rolls, you’ll need Weapon Focus (Mythic) and Extra Feat – Greater Weapon Focus (Rapier). Lastly, Flawless Attacks diminishes the penalty of your attacks from -5 to -4.

You’ll be able to take advantage of Camellia’s Medium Armor Proficiency by equipping the Chainmail of Comradery. With this, you get 9 AC and you’re able to add a maximum of +4 Dexterity Modifier. Moreover, you receive a Damage Bonus, which increases if you have the Outflank Feat, against the enemy you’re flanking. 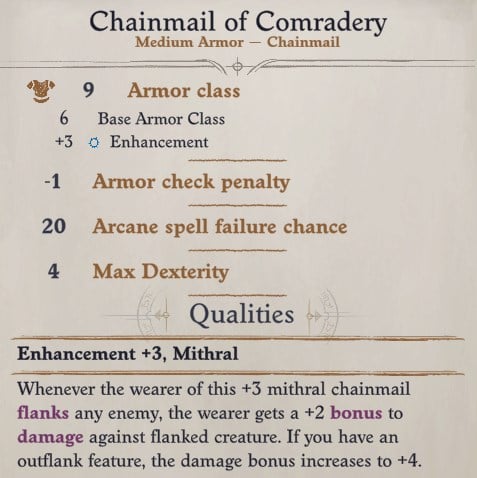 When it comes to Weapons, dual Rapiers like the Mind Piercer made out of Cold Iron, and Rapier +1 are sufficient for this Build. You’re able to overcome the majority of enemy DR since they’re vulnerable against Cold Iron. Alternatively, you can equip a Masterwork version of the Rapier to gain +1 Attack Roll Bonus. 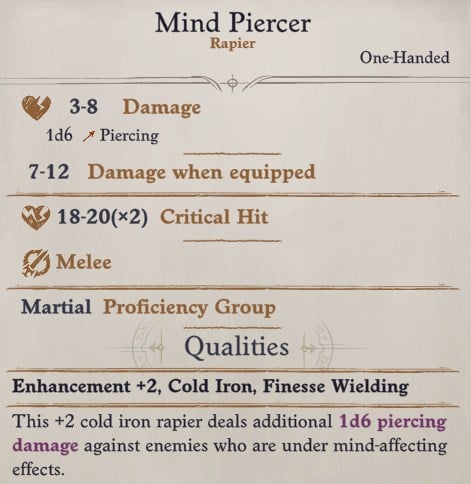 In terms of Accessories, you’ll want to wear the Ring of Protection +3 and Cloak of Resistance +2 to improve your AC and Saving Throws, respectively. To enhance Dexterity and Constitution by 2 each, you’ll need to equip the Belt of Physical Form +2. For your headgear, you can choose between the Phylactery of Positive Channeling to enhance the effectiveness of Channel Positive Energy or the Headband of Inspired Wisdom +2 to raise your Wisdom Modifier by 1. If you have extra gold, be sure to purchase the Goggles of Pure Sight from the Jewelry Trader in Drezen to increase your chances of successfully overcoming the enemy’s Spell Resistances.

Despite wearing all of these Equipment, you won’t be encountering encumbrance issues, which is why we didn’t invest points into Strength. 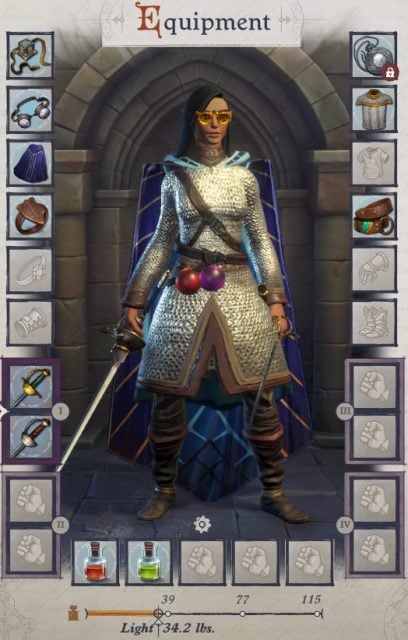 Camellia may sometimes be challenging to pilot since you’ll have to alternate between enhancing Melee Attacks and Damage while casting Spells to support the party. But once you get a better grasp of her playstyle, she becomes a valuable asset. 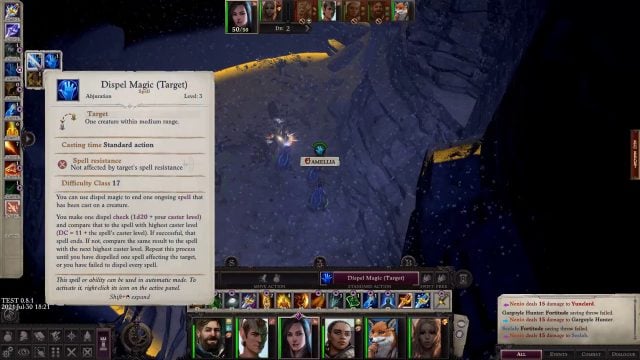 Since she predominantly deals with enemies up close, you’ll have to make sure to activate Acrobatics (Mobility). Although your speed is halved, this ensures that no enemy performs Attacks of Opportunity as you move around them.

In case you run out of a Spell that you wish to cast, remember to trigger Object Bond. This Ability lets you use any of your depleted and prepared Spells one more time. Lastly, remember to cautiously cast Spells like Burning Hands because you can deal massive amounts of damage against allies who are standing in the Spell’s AoE.