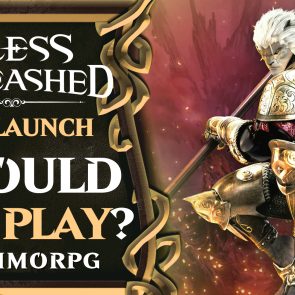 In this article we’re going to be taking a look at Bless Unleashed, a Free-to-Play MMO that recently released on Steam, and one that has had a major overhaul since its original release called Bless Online. If you’re in the market for a new MMO, or you just need something to fill the gap while you wait for that certain game, you may want to check out Bless Unleashed and see what you think.

This is a sponsored post. Please note sponsored posts are only sponsoring coverage, our opinions on the game are our own and not affected by any business relationships with developers or publishers

As I just mentioned, Bless Unleashed launched on Steam on August 6th, and is an overhauled version of the MMO Bless Online. Things that were overhauled or changed include the following:

This is a healthy amount of changes to the game, and even though I never played earlier versions of Bless, it’s easy to see that some effort has clearly been put in to make the general experience much better. 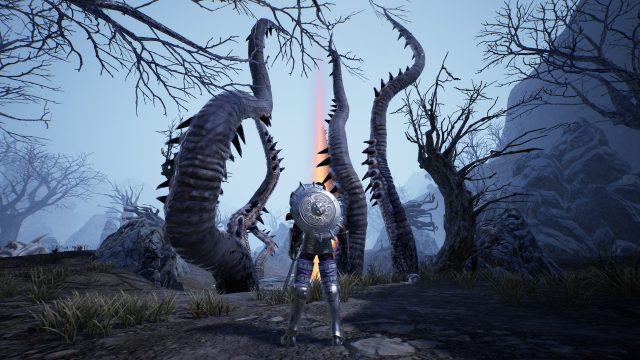 Having gotten that out of the way, let’s take a look at character creation, and see what Classes and Races you can choose from. Character Creation is a focal point for many MMO Players, myself included, so it’s important to see what options there are.

In Bless Unleashed players can choose from one of five Classes: Crusader, Berserker, Ranger, Mage or Priest. Crusaders and Berserkers are your melee Classes, Ranger and Mage your ranged Classes, and Priest your healing Class. Each Class is tied to 1 or 2 specific Races, so you cannot play any Class as any Race. For example, if you choose the Mage Class then you must select either Human or Elf.

You will then get to choose your gender, and completely customize your character from skin color, eyes, nose, mouth, hair, face, voice and various body sizes. The character creator has enough depth to make your character feel unique to you and is definitely worth spending some time in. You can do all kinds of crazy things to your character, from making them looking absolutely absurd, to downright hot!

Once character creation is complete you’ll be put through a brief tutorial showing you the basics of combat, giving you an idea of how Bless Unleashed will play. I actually recommend doing this for several Classes until you find one you like most, since you will have access to make Skills and Abilities you won’t gain for quite awhile once the tutorial ends. This should give you a clear picture of how each Class will play late game, without having to commit hours and hours of game time to find out, since this tutorial is only about 10 minutes long. 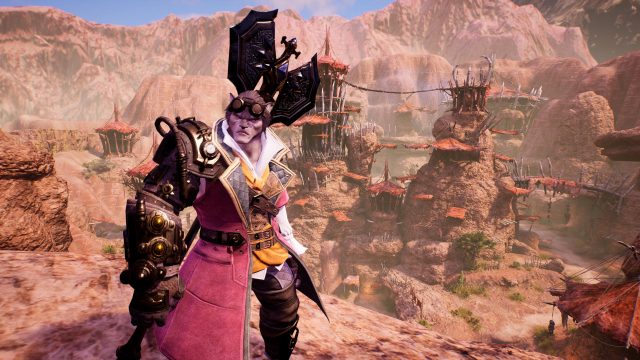 Once you’ve selected your Class you’ll have access to the combos and Skills of that Class. In my case, I chose the Berserker Class, so I had a lot of melee abilities like Whirlwind, Relentless Cleave, and Leap Attack. But each Class can only have 4 Skills slotted at once, so you will have to choose which Skills to use, with more becoming available to you as you level up.

Additionally, you can increase the effectiveness of Skills by spending Skill Points on them, which can increase their damage or reduce their cooldown times for example. This means finding and putting points into the Skills you prefer is a big part of your Build.

Beyond Skills, you will also gain Blessings, which are sort of a group of passive Skills that emphasize a certain style of play. There are actually 2 types of Blessings in Bless Unleashed, and these are Combat Blessings and Livelihood Blessings.

Combat Blessings affect your abilities, and further impact how you perform in combat. For example, if you are a Berserker and choose the Gift of Valor Blessing then you will increase the frequency and effectiveness of the Whirlwind Skill, pushing you to use it more. So if you are someone who loves to Whirlwind you would choose this Combat Blessing.

Livelihood Blessings affect your crafting and gathering capabilities, pushing you to specialize in certain aspects. For example, if you choose the Touch of Syrania Blessing then you will excel at fishing. Whereas if you choose Touch of Lily’anthes you will gain bonuses when harvesting crafting materials, making you much more effective at doing so.

These Blessings further customize your style of play, both inside and outside of combat.

Each Union also has a unique ability. For Instance, the Court of the Ravens can make themselves immortal for a short period time, allowing themselves to heal by defeating other players. And the Sentinels can save those around them by sacrificing some of their HP.

Progression in these Unions is acquired by doing the things listed in their “Progression” sections, like defeating elite enemies and world bosses in the case of Sentinels, or crafting things in the case of The Artisan’s Society. And besides a unique Skill you will also gain access to Union specific daily quests, as well as a daily buff only available to your Union, and access to Union specific vendors.

Lastly, there is of course equipment, which you can obtain from enemies, vendors, dungeons or crafting. Each player gets their own loot when doing activities, and equipment seems to be Class specific. That is to say you won’t get equipment for the Ranger if you are playing a Berserker. However, some pieces of equipment can be used on multiple Classes.

Players will have a primary and secondary weapon slot, 6 armor piece slots and 3 accessory slots to customize their character with, resulting in quite a bit of customization. And just like many other games, equipment has rarities like common, uncommon, rare, epic and legendary, each with a corresponding color to match.

Each item also has a corresponding level you’ll need to be in order to use it, with Level 45 being the current max level in Bless Unleashed.

Another big aspect of MMOs is of course Dungeons and group PvE content. Bless Unleashed has 3 different types of these: Arenas, Lair Challenges, and Dungeons.

Arenas are two player affairs that allow you to take on specific elite enemies for loot and rewards. Lair Challenges are similar but require 5 players to effectively pull off. And Dungeons are your typical 5 man instances where there are multiple bosses and rewards. There are also Timed Dungeons, which are harder versions of specific Arenas, Lair Challenges and Dungeons that reward additional loot and change every week or so.

What I really like about Bless Unleashed is that there is a Matchmaking system that lets you queue up for whatever activity you want to do, and you can do it from nearly anywhere in the game. Depending on the server you are playing on it will take you between 30 seconds to 5 minutes to find a match, but you can continue on questing or crafting while you wait, which is nice. 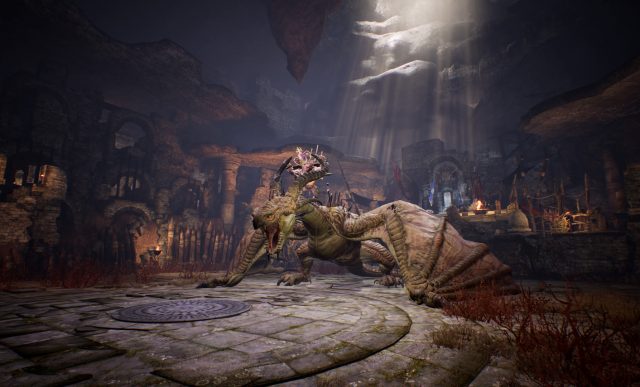 PvP is handled two different ways. The first is from the matchmaking menu where players can select “Battlefield” or “Warlord Arena” which are 15 v 15, and 3 v 3 instances respectively. This allows players to queue up and find a match without having to find people to play with themselves, which is nice.

The second is by flagging up outside of towns or cities, which allows you to attack any other players, though attacking players lower than level 30 (which is the minimum level you need to be to flag up) will result in drastically reduced damage.

Upon attacking a player you will become hostile and your name will appear hostile to all other players who will then be able to attack you, whether they are flagged or not. Killing other players results in a criminal status that lasts longer and longer the more players you kill, and provokes NPC Guards and can even mark you as a red dot on the map to all other players. If you die while you have criminal status then you will take a temporary penalty to your stats.

Bless Unleashed is a Free-to-Play MMO, meaning you don’t have to spend money to try it out, and there is no monthly subscription fee. This is probably one of the most compelling reasons to give Bless Unleashed a try if you like what you see, since there is simply no risk to you.

There is a Premium Battle Pass that you can purchase if you want that gives you rewards over the course of each season, which lasts 90 days. There is a free Battle Pass as well, but if you want the premium rewards you’re looking at 750 Lumena, which is the currency used in Bless Unleashed’s Cash Shop. This roughly translates to 7.50 USD, which isn’t terrible.

You can purchase consumables like boosters that increase your XP or Gold gain, as well as coupons for increased bag storage space, personal storage space, or account storage space. There are also boosters to boost your mining, gathering and logging for 30 days if you want.

There are also emotes and dyes, as well as housing items and workers to work at your estate that can give you bonuses and chances at more loot. You can also buy things like name change vouchers, or guild change vouchers.

Lastly, there are potions and elixirs you can purchase in the store that give you Critical Chance, Critical Damage, Defense, or Attack Speed, but all of these things can also be crafted (or purchased on the Marketplace from other players), and most of them you can only have one active at a time. Whether you consider this pay-to-win or not is up to you, but I personally prefer this to F2P models that gate content behind time or money once you’re already invested. Bless Unleashed does neither of these things, which should be good news for most.

If what you’ve seen interests you, consider using our link to download the game and help support the channel. Bless Unleashed is Free-to-Play after all, so there is really no risk in giving it a go! It is currently available on PC via Steam, and on Xbox.