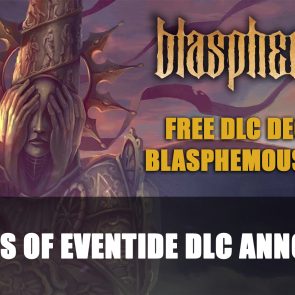 The metroidvania Blasphemous is getting its final DLC chapter Wounds of Eventide this December. A teaser also revealed a Blasphemous sequel.

Blasphemous: Wounds of Eventide is the last DLC for the punishing metroidvania title. The DLC is set to launch for free December 9th.

While it’s sad to hear that this will be the last DLC for Blasphemous, news of a sequel was also revealed. The trailer teased Blasphemous 2 which has a release window of 2023. The trailer didn’t reveal much as it just shows a “II” at the end of the video, but it does mean a sequel is underway.

In case you missed it, the latest free update brought The Stir of Dawn, which added New Game+, a new penitence system, revamp of the maps systems, new items and number of balance changes.

Blasphemous follows the tale of The Penitent One, the only living survivor of the massacre of the Silent Sorrow. The game has punishing action with a number of brutal executions. There’s plenty of abilities and customisation to find your suited playstyle. The pixel art offers gruesome effects and highly detailed environments.

If you’re looking for more great metroidvania titles, you can check out our list here in Top 10 Metroidvanias To Play In 2021. If you want to know what we thought of the game, check out Blasphemous Review – Dark. Bloody. Unforgiving.

Blasphemous is available on Nintendo Switch, PC, Playstation 4 and Xbox One with the DLC Wounds of Eventide releasing December 9th.

For more Gamescom 2021 news find it here in The Waylanders Releases November 16th 2021 and Pathfinder Wrath Of The Righteous Gets Launch Trailer.