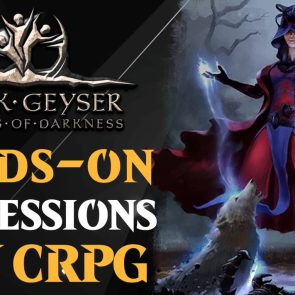 When I first saw Black Geyser: Couriers of Darkness, it reminded me of CRPGs such as Neverwinter Nights and Baldur’s Gate. Who can forget memorable companions like Minsc and his hamster Boo together with the egotistic yet powerful Edwin Odesseiron? Or how about the harrowing experience of solving numerous traps and puzzles in Durlag’s Tower? However, unlike these two classics, Black Geyser isn’t based on any Dungeons & Dragons ruleset. Instead, and similar to Pillars of Eternity, it uses its own system.

In this Black Geyser Gameplay Hands-On Impressions, I’m going to share everything we know so far in terms of the story, quests, combat, the unique greed mechanic and more! Black Geyser, which is being developed by GrapeOcean Technologies, started as a Kickstarter back in 2018 and it was originally intended to be released in August 2019. Right now, the developers are looking to fully release the game in early 2022. It will be available in Early Access on August 26, 2021 via Steam.

Black Geyser: Couriers of Darkness is an isometric fantasy CRPG set in the world of Yerengal, whose dark past is quickly creeping back up in the present time. Centuries ago, the Evil God Rothgor, summoned deadly beasts to bring about the eventual destruction of Yerengal. This continued for hundreds of years until a group of adventurers managed to banish the most terrifying beast of all. This led to decades of peace and prosperity until the arrival of Zornilsa, the Goddess of Greed.

Despite the weak influences Rothgor and Zornilsa held, they decided to band together to create the Black Geyser in an attempt to become powerful and to seize control of the world once more. This brought about the downfall of several successful kingdoms due to the growing corruption and greed of mankind. At the moment, nations are in opposition of one another as they continue to fight for power. 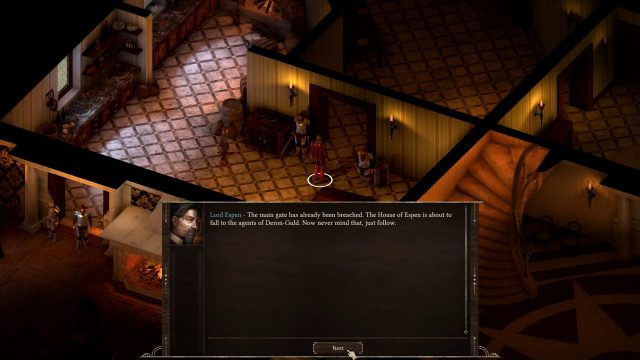 Within a few minutes of playing the game, you discover a deep secret that reveals your true identity without knowing the reason behind it. You then start your adventures in Isilmerald, one of the kingdoms of Yerengal, in the hopes of finding out more about who you really are. After several quests, you learn about the brewing civil war between the realms of Isilmerald as well as the threat of the Deron-Guld’s growing rebellion against the King.

Although the background of Black Geyser is interesting, the first main and side quests aren’t as captivating. It feels like you’re instructed to go to several places for the sake of exploration rather than influencing you to discover these for yourself because you want to know more about the world and your character.

You’ll also encounter a lot of fetch quests related to brewing and drying ingredients to create potions as well as those that involve saving an NPC’s friend or collecting debts. You’re not forced to do them, nor are these indicative of what the game will be since it’s still in Early Access, but it’s quite concerning how prominent they are. 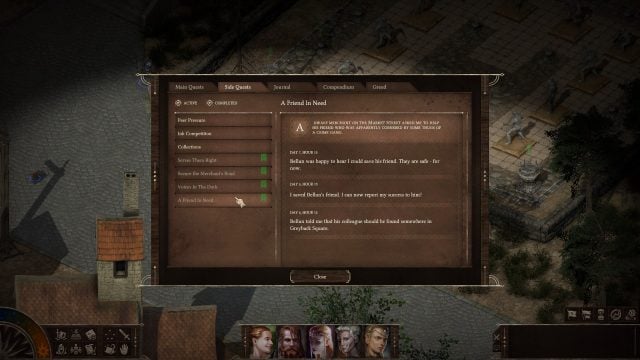 Lastly, the dialogue and writing aren’t memorable enough to make exploration enticing. I’m hoping to see significant improvements in storytelling and quests since we’re only a few months away from Black Geyser’s full launch.

Black Geyser is a single-player game that utilizes Real-Time with Pause combat. As confirmed by the developers, they don’t have plans of adding a Turn-Based Mode anytime soon since they’re focused on finishing the game.

When it comes to character creation, you have the option to create your own or to select from a list of pre-generated characters. For example, if you want to deal damage from afar with your bow, then you can pick the Elf Lorien. Conversely, if you prefer to manipulate others to get what you want, then Thomas would be the better choice. 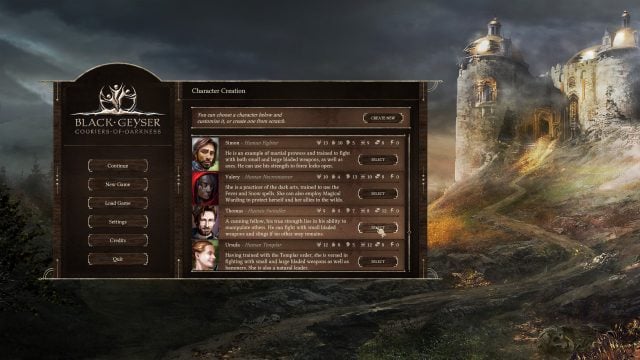 In Black Geyser, you can choose from up to 5 races, namely the usual Human, Dwarf and Elf or the unique Feldegug and Rillow. Feldegugs are white Elves who were held captive by a demigod in his ice castle. For years, they were forced to drink magical water, which imbued them with special abilities. Decades later, they were able to retain the powers that defined them. Currently, Feldegugs are highly resistant against Cold Damage and they’re proficient with Weapons made from ice or crystals. 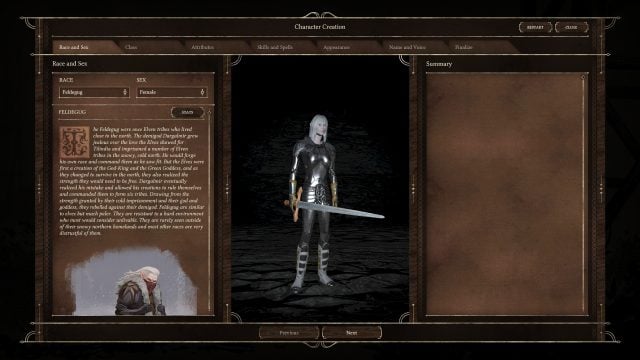 Unlike Feldegugs, Rillows sprung from the scorching desert thanks to Elenuator, a powerful Djinn who created them out of wet sand. Their purpose is to seek and to explore, leading them to become nomadic traders and merchants of spices and unique conconctions. As such, they’re adept in brewing and drying ingredients to create potent potions and powders.

There are 4 Classes in the game, specifically Warriors, Outlaws, Priests, and Wizards with a total of 13 Subclasses, which let you experiment with a ton of builds in Early Access. If you want to play as a Warrior who deals great damage against the Undead regardless of your weapon type, then the Templar is best for you. But if you prefer to play as an Outlaw then going for the Swindler would be the better option since you gain significant bonuses for your Bargain and Persuasion, Steal and Plant Item, and Hide and Sneak Skills. 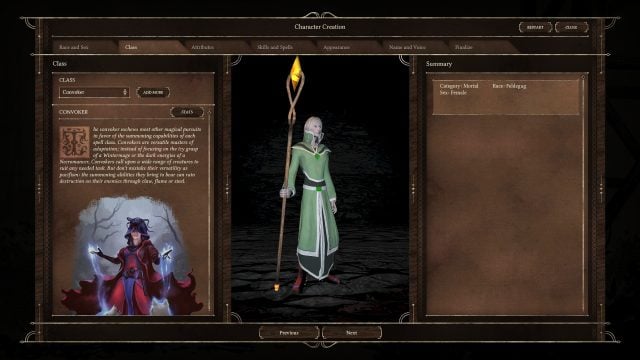 For the Wizard, you can become a Convoker, which allows you to attack with your summoned creatures, or a Necromancer to build your very own Bone Golem to fight for you.

Similar to D&D and depending on your class, you’ll have to invest points into your abilities or attributes. These are Physique, Dexterity, Intelligence, Focus, Charisma and Supernatural. Physique is a combination of Strength and Constitution in that increasing this attribute improves your Physical Damage and HP. Focus boosts your mental fortitude and spell efficiency, whereas Supernatural enhances your resistance against multiple damage types. Meanwhile, Dexterity, Intelligence and Charisma function the same way as in the D&D ruleset. 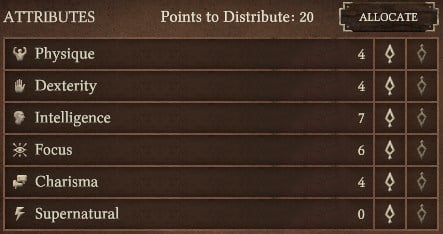 Next you have Skills and Spells, which you also allocate points into. For General Skills you can focus on crafting potions by investing in Brewing and Drying. This is further influenced by your Intelligence, Dexterity and Focus Attributes. Conversely, you can opt to boost Bargain and Persuasion to purchase items at a lower cost. This is affected by both Charisma and Intelligence. 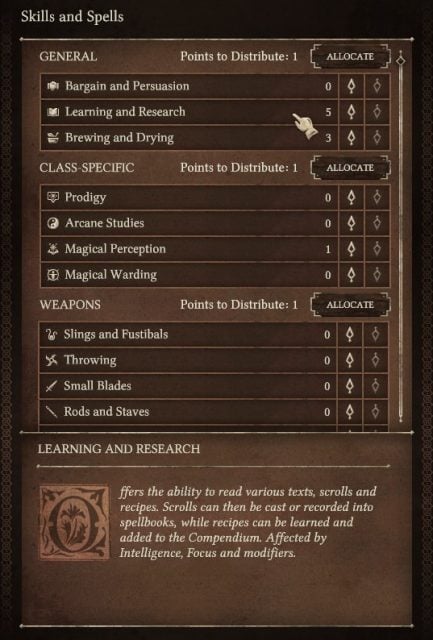 In addition to these, you’ll distribute points for Class-Specific and Weapon Type Skills as well as Spells if your class is a caster.

Black Geyser follows the RPG route of completing quests to level up your character in order to unlock and to improve your Skills. The game doesn’t rely on dice rolls to dictate whether or not you hit your target, nor does it influence the amount of damage you inflict. Instead, your attacks and damage are based on the stats you get from your race, class, attributes, weapons and armor. 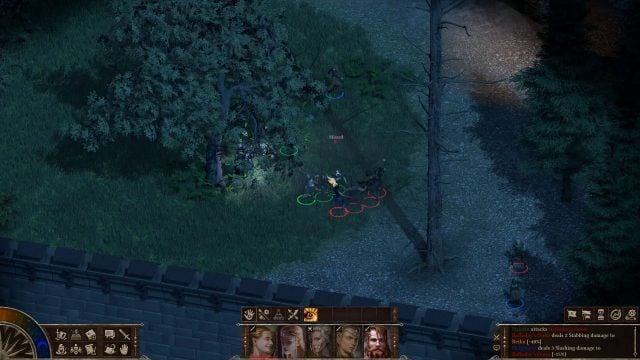 For instance, if you’re an Elf, you gain an extra 15% chance to successfully hit your enemy when you attack them with a wooden bow. There’s a caveat however, since choosing this race will lock you from becoming a Necromancer, Shaman or Templar. The same limitation is true for the other races except for Humans.

When it comes to Real-Time with Pause combat, Black Geyser feels reminiscent of the classic CRPGs we’ve grown up with. Similar to Pillars of Eternity, each action is accompanied by a recovery time before another action can be made instead of continuously spamming attacks. While you’re recovering, you can’t cast Spells nor slash targets with your Longsword. This provides a more immersive experience since combat is happening at a faster pace but it can feel overwhelming at times especially if you’re new to this game mode. 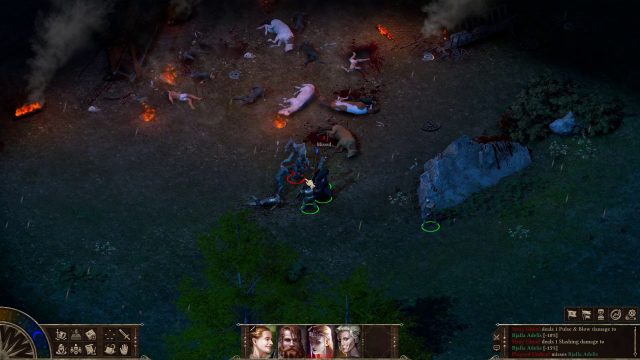 Additionally, there’s a Party Sheet that allows you to strategically manage your party members. It shows you how cohesive and well-balanced your party composition currently is. There’s also a Formation and Behavior tab so you can choose or create the optimal formation based on your specializations. 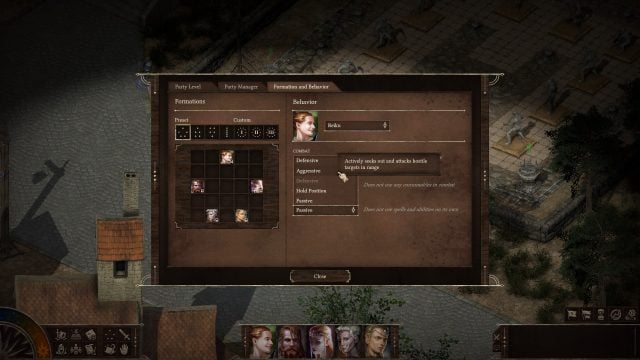 For the behavior, you’re able to assign their stance in combat, whether they should be aggressive or defensive and if they ought to assume the tank, healer or damage dealer roles.

Remember that at any given time, you can have up to 4 other Companions. You can even romance them as your relationships develop. 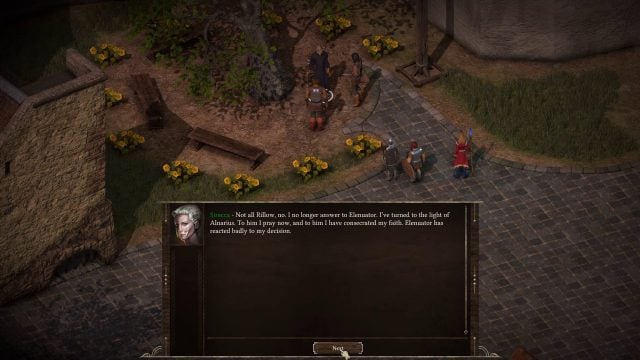 Black Geyser’s Early Access offers 15+ hours of gameplay including side quests. On the other hand, the full game is expected to last you more than 60 hours depending on your build and combat difficulty.

Like in D&D, you have spell slots, which limits the number of spells you’re able to use. However, the spell system in Black Geyser is straightforward in the sense that you don’t need to prepare these to use them. You simply add them to your list of Memorized Spells. You can also increase the number of times you use the same spell as long as you have additional slots. For instance, you can cast Snow 3 times to deal Cold Damage if you have 3 slots allocated for it. 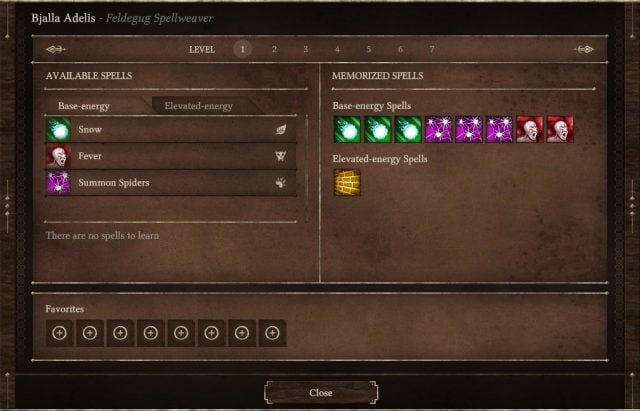 There are two types of spells, namely Base-Energy and Elevated-Energy where the latter is stronger and more potent than the former even if their corresponding spells have the same level. Note that once you’ve used up a spell slot, you’ll need to rest to replenish them. You can do this by setting up camp or renting a room.

Black Geyser has unique mechanics that change the way you play the game. With Plant Item, your Thief character is able to literally plant stolen accessories in another NPC’s pocket to have them accosted for theft. This diverts the authority’s attention from your pilfering ways. You can even place a venomous powder inside their clothing to poison them after a certain period of time.

Meanwhile, greed is similar to your party’s alignment. If you continue to loot from dead bodies, your greed meter increases and as a result, the power of Zornilsa increases. The higher your overall greed level, the more chaotic the world becomes. For example, you won’t be able to buy items for a cheaper price since merchants will start to sell them at exorbitant amounts of gold. Additionally, once neutral or friendly NPCs will treat you with great caution and skepticism. They can even attack you on a whim. 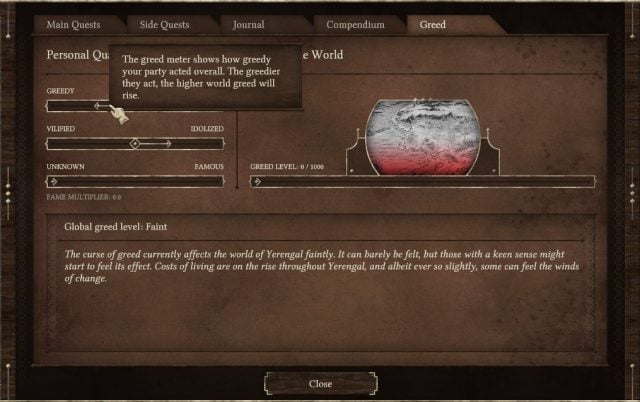 The greed mechanic is an intriguing concept especially with how it punishes unfavorable actions. However, it does seem unbalanced at the moment. For instance, you can steal items from the cabinets and chests of NPCs without being penalized. They don’t react to what you did. Your greed meter doesn’t even increase as well. I’m looking forward to seeing how this will evolve in the coming months and how it impacts the game especially for players who intend to go full on greedy.

Black Geyser could be another classic CRPG that fans have been waiting for. Not only does it have the charm of real-time with pause combat, but it’s also attempting to create something new by introducing game-changing features such as the greed mechanic. 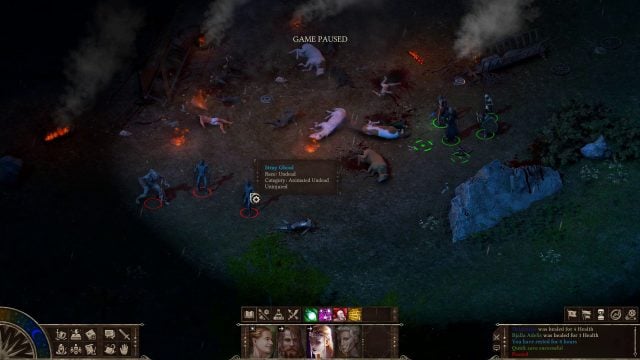 However, the game has some issues when it comes to the average storytelling and dialogue, volume of fetch quests, fps dips, and slow load times. As such, the next few months prior to it’s full release will be crucial in determining whether Black Geyser will be a mainstay in your Steam library or not. You can play the Early Access version of the game on PC via Steam today, and though no price is currently listed, players were backing the game on Kickstarter for around 20 USD, so I think you can expect a similar price range.

Black Geyser: Couriers of Darkness will release on Steam Early Access on August 26th. Drop by our Black Geyser wiki for help.