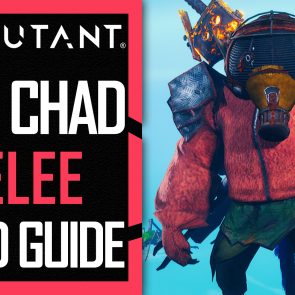 In this Biomutant Build Guide, I’m going to be showing you my Mercenary Build, which can also be used by the Saboteur or Sentinel classes. It uses a deadly combination of Perks and Melee Weapons to beat enemies to a pulp. This Build is not overly complicated, is good for new players and veterans alike, and is a bit more challenging than a Ranged Build. If you intend to play a Melee Build, you need ideas on how to play one but aren’t sure exactly how, then this guide is for you.

Melee Builds have a good amount of flexibility because there are few Perks and no Armor that benefit one combat playing style over another. Wung-Fu Wonder and Wung-Fu Barrage only affect Unarmed combat, but since they are the only Melee combat style that cannot modify its Weapons, this is understandable, and helps to offset some of the reduced damage Unarmed would otherwise have. Additionally, there are enough Perk points to take all the Perks you want with this Build so this is no issue whatsoever. 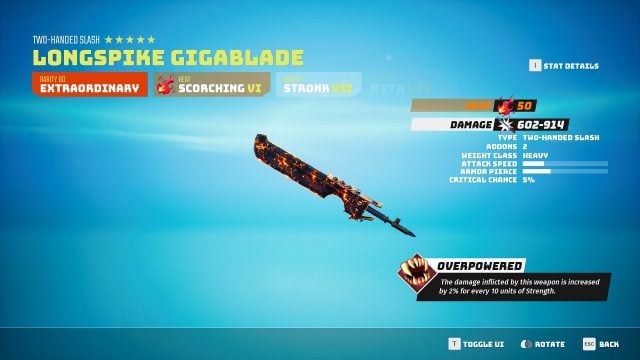 The drawbacks of Melee Builds are that they have limited AoE, they must often engage many enemies at once, and that they can be attacked while mid animations that they cannot cancel out of. These things are enough to make any player regret their decision to play melee, but in this Guide I will show you how to overcome these so that you can start kicking ass and taking names…

Choosing your Breed in Biomutant may seem like an important affair, and it is true that it has some impact on your character, but you can play this Build with any Breed and be just fine. That said, the Dumdon Breed has the most impact on Melee Damage, and is the go to choice for this reason. If you don’t like Dumdon, then I would advise either Murgel or Primal for higher Critical Chance since this will also help you with damage. 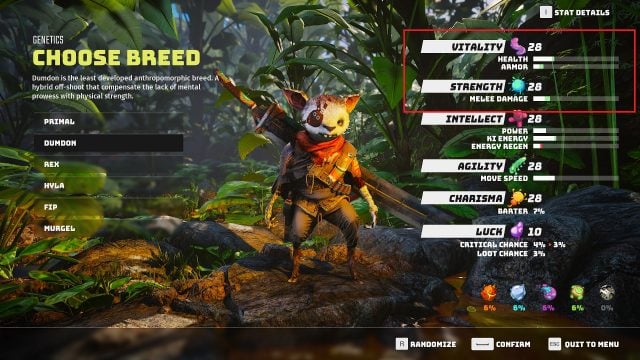 Next up you have Attributes. During Character Creation you will only be able to increase your Strength, Agility, Charisma, Intellect, or Vitality. Because Melee Builds really only increase their damage via their Perks, Strength and Luck, it is imperative that you increase Strength as high as you can during Character Creation. You cannot increase Luck during Character Creation, so this provides you with the best possible start you can get, and helps you get over the “hump” of combat much faster. Vitality would be good too, but you simply have no room for it in this Build without suffering lower damage, and you can gain Health from your Armor. 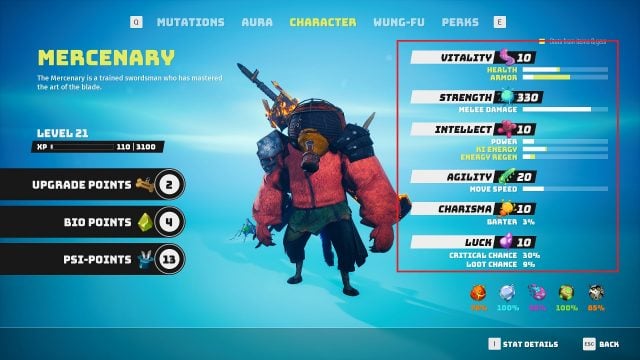 Just pump Strength! The 10 extra Agility is from a workout machine…you don’t need Agility at all for this Build.

For Class selection you can choose between Mercenary, Saboteur or Sentinel for this Build, with Mercenary being the preferred choice. Mercenary simply increases your damage the most of the three, with Saboteur and Sentinel in a near dead tie for second choice. Sentinels can do more damage thanks to Invincible, while Saboteurs will be slightly tankier due to Evasion. Any work fine, and I’ve listed all three Classes’ Perks below so you can compare them and make your own decision: 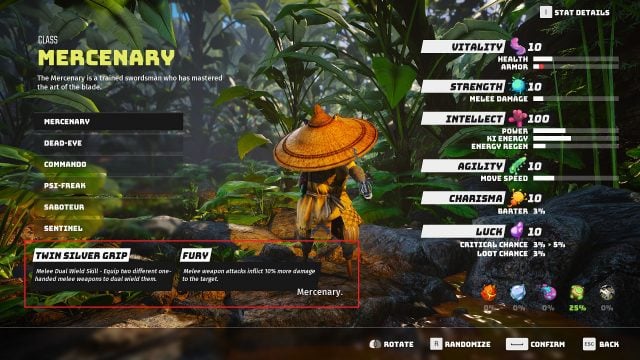 This Class can only be obtained via DLC, but you can use Sentinel or Saboteur instead.

In this section I’m going to run you through the Perks you should look into taking for the Mecenary Build, and it will include some of the ones I just mentioned as well. This should give you some idea of what to select, and it’s not so important what order you take these in.

Besides these you’ll simply take your chosen Classes’ Perks (listed above) as they become available to you, since some have level requirements. Some are worse than others so prioritize the General Perks if they are better than the Perks of your Class.

Weapons are a very important part of any Melee Build, and acquiring good ones with good Addons and Traits can be the difference between winning and losing with a Melee Build. The hardest part of playing a Melee Build is the very beginning of the game where your Weapons are very bad, and this is true no matter which Class you chose. What I advise doing until you find a good one (or two if you’re dual wielding) is to unequip all your Weapons and play completely Unarmed. Take the Wung-Fu Wonder Perk as quickly as you can, and just own face while you search for a Weapon. I know it sounds crazy, but it outperformed any other strategy I implemented.

Playing Unarmed shines in the early portions of the game, and picking up the Wung-Fu Unspeakable Hand makes all the difference. It does fantastic damage, and gets you out of harms way, even when locked into some animations.

However, as you start to get later in the game, Weapons begin to outperform Unarmed, even with Glove type Weapons equipped like Blazing Gloves. In fact, this Weapon actually lowered my overall damage compared to using nothing at all. I believe the game considers it a two-handed Weapon, which negates your bonuses to Unarmed damage. This may be fixed in the future, but until it is, if you want to play Unarmed you are better off using no Weapons. 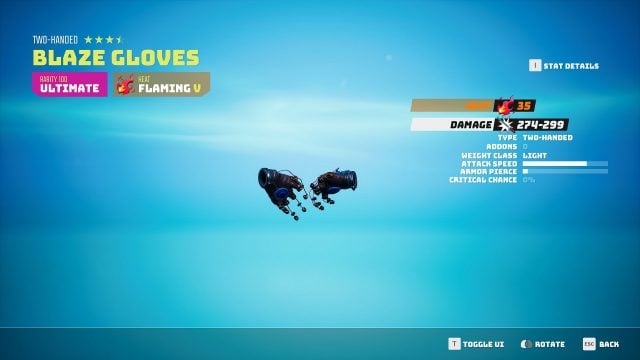 One-Handed Slash only makes sense in Biomutant because some Classes don’t begin the game with Twin Silver Grip. Once you have this Perk this combat style becomes irrelevant, and both Dual Wield Melee and Two-Handed Slash outperform it by a mile. Don’t use this unless you intentionally want to make the game harder for yourself. Even Unarmed is better than this combat style.

The downside to Dual Wield is that it staggers enemies less often, it doesn’t have as good of a Wung-Fu move in Unstoppable Pig, and it lacks the AoE that Two-Handed Melee Weapons have. In short, it may be better at one-on-ones by a little bit, but it isn’t as good generally when facing multiple enemies. 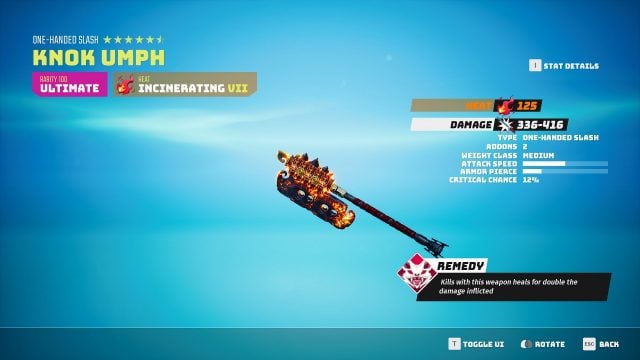 Remedy is really good on at least one of your dual wield weapons for the healing. This also gets you the Invincible bonus back, by getting you up to full Health.

Two-Handed Slash is on par with Dual Wield in terms of damage in most cases, and it has good AoE and stagger, often causing enemies to fall down or stumble allowing you to continue your assault. The Wung-Fu Wicked Wolf is also exceptionally good, and can often poise through many enemy attacks, allowing you to connect for damage even if you take damage. Some times trading hits will cause an opening where you can continue attacking without a response from the enemy. 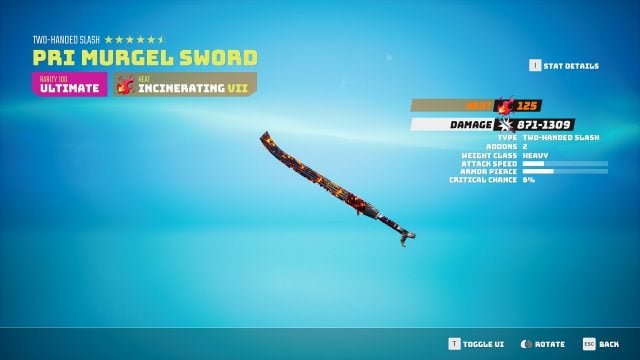 This weapon, though the damage is markedly higher on the screen, is outperformed by the Gigablade with Overpowered on it.

Crush is also not a bad playstyle and it swings faster than Two-Handed Slash, but it generally deals less damage and has less range. It’s Wung-Fu Mercury Drop is just as effective as Wicked Wolf, if not more so since it does damage in an AoE on impact. If you want a happy medium between Dual Wield Melee and Two-Handed Slash then this is a good choice.

I do not recommend any of the Melee Tribe Weapons for this Build since none of them can be improved and they lack the damage you will gain from custom weapons that you can piece together yourself. You can use them if you find them early game, but I still feel Unarmed is the way to go until you find a good Weapon.

One important note, that you absolutely must know. Overpowered is the pound for pound king of Melee Weapon Traits, and it can increase your damage so much that a Weapon with it will almost always out perform a weapon of the same type without it. For this reason I highly advise you use only Weapons with Overpowered, unless you are Dual Wielding, then you can have a second Trait of something else like Remedy for extra healing.

If you want good damage, get a weapon with this on it.

Armor is important to this Build because you won’t have Luck to boost your Critical or Vitality to boost your Health so you must find both of these things in your Armor. Additionally, you will need high Armor values to withstand the damage you will taking when facing many enemies at once in Melee Combat. Finding Armor that has all three of these things on it can be tricky, but you should prioritize Armor first, then Critical Chance and finally Health. 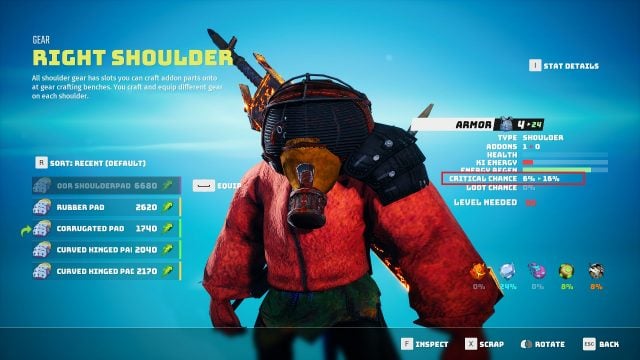 16% Crit Chance on one piece of Armor…

Learn to Parry! Parry can absolutely save your butt, especially when many enemies are coming at you. Use it too much even. Land from an aerial attack? Hit Parry immediately when you land in case you are attacked. Attacking an enemy and finish a combo? Hit Parry! Enemies usually hit you when you can’t do anything, so anticipate it and hit Parry just in case. You’ll thank me later!

I like to use Freeze and Blink with this Build because you won’t use all your Ki Energy in combat anyway, so having some utility spells can come in handy. Blink allows you to dash far away if you need to dodge a powerful AoE attack, like when facing larger monsters. Freeze, while suffering from poor damage, is excellent at freezing enemies so that you can counter attack when you are surrounded. You won’t need these often, but it’s great to have them when you do need them. 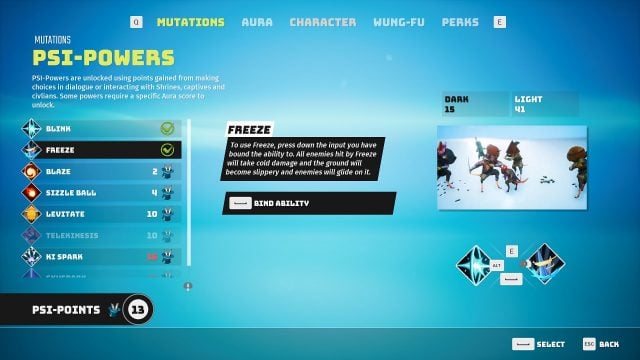 Freeze is good at buying you space and time.

You can find some really good Weapons once you are around level 15 or so, but the best overall Weapon I’ve found for this Build is the Gigablade, which I purchased from a Brawler Broker. There may be better ones out there, but this one was Critical Hitting for over 5k damage at level 20, absolutely wrecking enemies. Keep checking Brokers until you can find one with Overpowered on it, because this Weapon Trait is a must.

Lastly, don’t get discouraged if you are having trouble early on. Like most Builds Melee Classes don’t get over the hump until around level 15, so hang in there until then and avoid fights that are too hard if you must. There are likely to be a few that just have too many enemies, and you can always come back later once you’ve gotten some better gear.

Stay tuned for more Biomutant Build Guides, and be sure to check out the Biomutant Wiki if you have further questions about the game. What Build would you like to see next? How can I improve this Build? Let us know in the comments below!