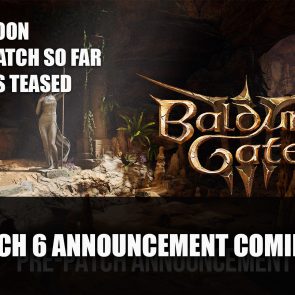 Larian Studios tweeted earlier this morning that Baldur’s Gate 3 Patch 6 is right around the corner. Attendees of the upcoming EGX Event in London this coming October 7 to 10, will get a chance to check out a sneak peek of what’s in store for the game.

The developers have teased that a new playable Class will be introduced in the event as well as a strangely “equippable Salami” – their words, not mine. The last Class we had was the Druid Class, which made its debut back in February 2021. In addition, they’re now considering Patch 6 to be the biggest Early Access patch to date. They’re already planning to hold another Panel from Hell to discuss the changes, although no dates have been provided at the moment.

Patch 6 is right around the corner, and it will make save games from previous versions of BG3 incompatible. If you want to continue your Patch 5 adventures, we have a beta branch for that.

Similar to major updates, any saves made prior to the release of previous patches will no longer be accessible once you download Patch 6, which is approximately 60GB in size. You can check out detailed instructions on Steam in terms of branching so you can continue playing Patch 4 or 5 saves. There’s also a small note at the bottom stating that any installed Mods should be removed if you’re planning to update your game and play.

It’s a party, and you’re invited! We’re bringing @baldursgate3 to EGX, with something positively magical for you to get your hands on in-game. See you all soon! https://t.co/AdgceWjFSk

In Baldur’s Gate 3’s current state, we’re not yet sure when the full game will be released, however, the tentative date is set in 2022 for now. What do you think of this Early Access update? Which new Class are you hoping to see next?