The post Baldur’s Gate 3 Next Playable Class is The Sorcerer appeared first on Fextralife. 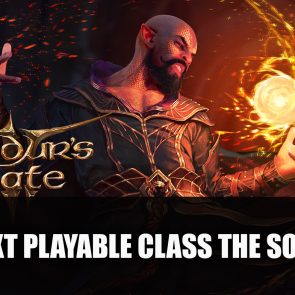 Larian Studios have revealed the next playable class for Baldur’s Gate 3 which is the Sorcerer.

Baldur’s Gate 3 Next Playable Class is The Sorcerer

Larian Studios recently teased a new playable class that would be coming to Baldur’s Gate 3 which is currently in Early Access. A recent tweet on their official Twitter account has revealed the next class to come to the CRPG is The Sorcerer. Those who are attending EGX will be able to check out the new class.

The new class will be coming as part of the biggest patch yet, patch 6 which has already been announced to be 60 GB. While there isn’t any news so far when this patch will drop, but it will be “around the corner” meaning soon according to their previous tweet.

The last class to be added to the game was the Druid class, which was added back in February 2021. Another Panel From Hell which goes over in detail new additions and updates has already been planned so we’ll keep an eye out on the next announcements.

It’s time to class up, EGX! Those attending the show can check out a new class for Baldur’s Gate 3, The Sorcerer! We can’t wait to hear what you think about all the spells at your disposal… pic.twitter.com/dug8IkRvjq

The post Baldur’s Gate 3 Next Playable Class is The Sorcerer appeared first on Fextralife.