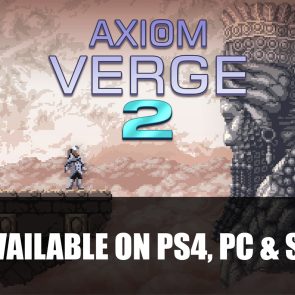 Developer Thomas Happ has surprisingly announced the release of the sequel to the acclaimed metroidvania game, Axiom Verge 2 is now available.

Axiom Verge 2, the sequel to the metroidvania title of the same name was surprisingly announced to be releasing today on Nintendo Switch, Playstation 4 and PC via the Epic Games Store. The news was shared via the Nintendo indie showcase today and now available on these platforms.

Axiom Verge 2 had already been four years in the making when it was first announced back in 2019. The release date has been moved a couple of times, but finally today it has been released.

The sequel while still connected to Axiom Verge is a new game with new characters, new powers, new enemies and a new world to explore. This means you can play it before the prequel if you wish.

The first title Axiom Verge made our Top 10 Metroidvania to Play in 2021, you can check out the rest of the top contenders here.

Axiom Verge 2 is now available on Nintendo Switch, Playstation 4 and PC via the Epic Games Store.

For more news find it here in Eastward Launches Next Month As A Nintendo Switch Timed Console Exclusive and Tales Of Arise Will Get A Playstation And Xbox Demo Next Week.