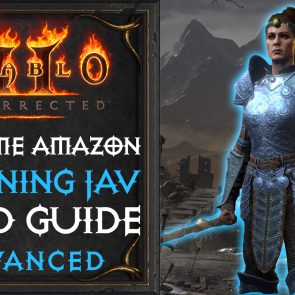 The Lightning Javazon is one of the highest DPS builds in Diablo 2 Resurrected. Using the Lightning Fury Skill to deal with crowds of enemies from a distance, and Charged Strike to deal with Bosses and Elites in melee combat, this build can clear any type of content in just a couple of seconds. 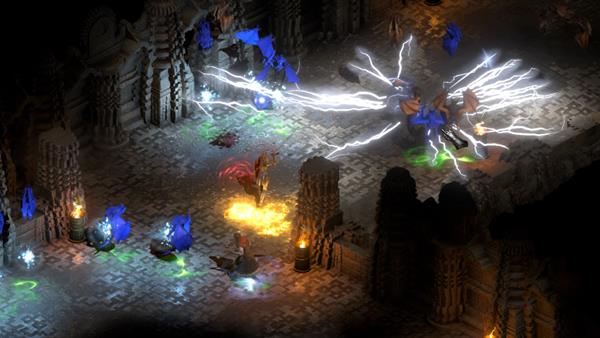 This Diablo 2 Amazon Build is intended to be used for Nightmare and Hell difficulties starting around Lvl 40. You can start the game with this build, but I personally recommend you use our Poison Javazon Build instead, and then respec into this one. If you are already playing and want to respec into this build though, the easiest way to do it is by claiming the Den of Evil reward from Akara at the Rogue Encampment. You’ll get 3 respecs (1 for each difficulty) and you’ll need to be on the same difficulty to reclaim them.

Like most Builds in Diablo 2 Resurrected, our Stats distribution will focus on assigning enough points into Strength and Dexterity to meet equipment requirements, and then assigning everything else into Vitality to gain as much Life as possible. 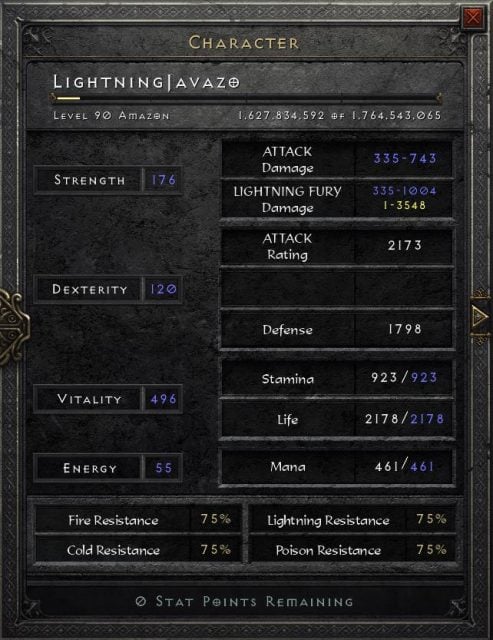 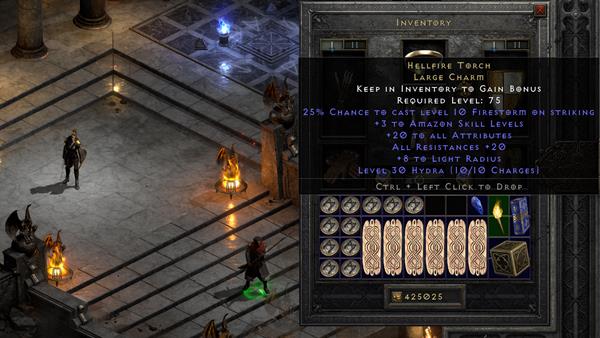 The Lightning Javazon focuses on the Javelin and Spear Tree, but you’ll also need to spend some points into the Passive and Magic Tree. You’ll use the following Skills when playing this Diablo 2 Resurrected Amazon Build:

This skill enhances your Javelin throw, making it release a bolt of lightning when you hit an enemy, for each enemy in range. This means that, the more enemies there are, the more powerful Lightning Fury is.

This effect will happen for each enemy that gets struck by your attack, meaning that if the Javelin pierce through the first enemy and hits a second one, you’ll get 2x the amounts of lightning bolts.

This skill provides your projectiles a passive chance to pass through enemies on hit. This includes your Javelin throws, and will allow you to trigger Lightning Fury multiple times on a single throw.

With the optimal gear, you’ll be able to get around 75% from the Pierce skill by only assigning 1 point here. When you add that with 33% Pierce chance provided by the Razortail Belt, you’ll get more than 100% pierce chance, meaning that your Lightning Fury throws will always pierce through your enemies.

This skill allows you to perform a melee attack with added Lightning damage, that also releases charged bolts on impact. This is the highest single target DPS skill in the game, and allows you to defeat Elites and Bosses in less than a second.

This skill greatly increases your attack rating, allowing you to successfully land your Charged Strikes on bosses without any issues.

These three skills allow you to evade enemy attacks on different circumstances, greatly increasing your survivability.

This skill already has a very high damage output, so sparing some points on increasing your dodge chances is a great investment

I personally like to spend 1 point here to use the Valkyrie as a meat shield. It’s very important to keep your mercenary alive due to its Infinity Weapon effects, and the Valkyrie will draw the attention away from him.

Since this guide begins at Lvl 40, you’ll want to first focus on your Lightning Fury and Charged Strike, and then later on unlock your Valkyrie and max out the Synergies. 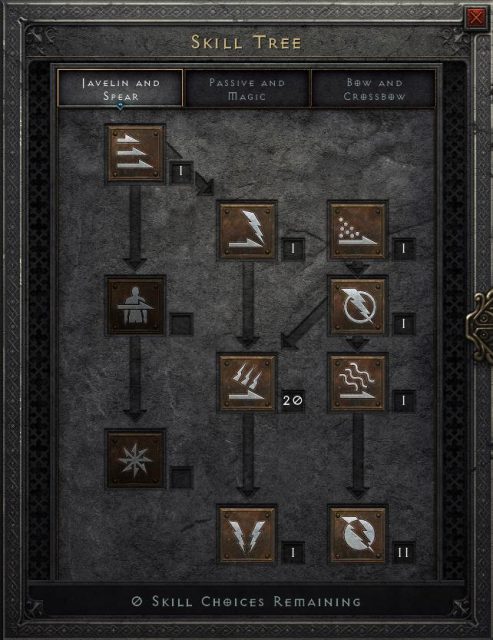 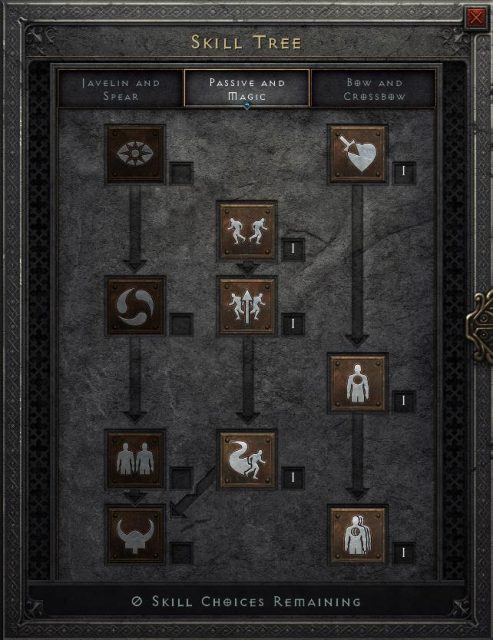 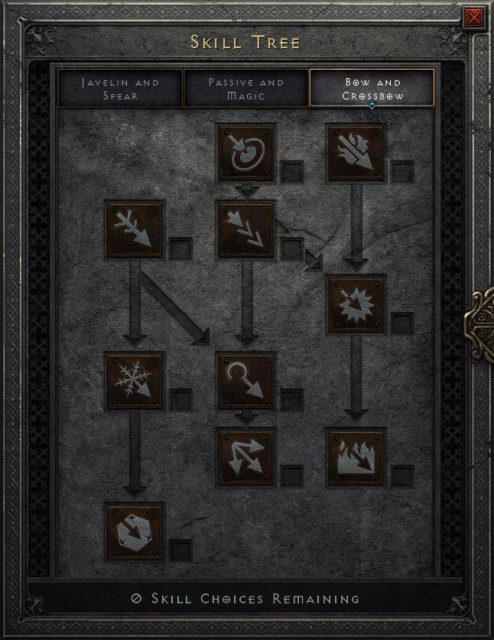 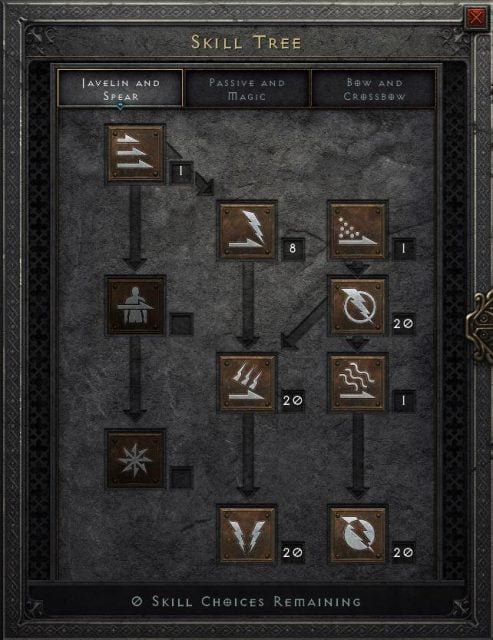 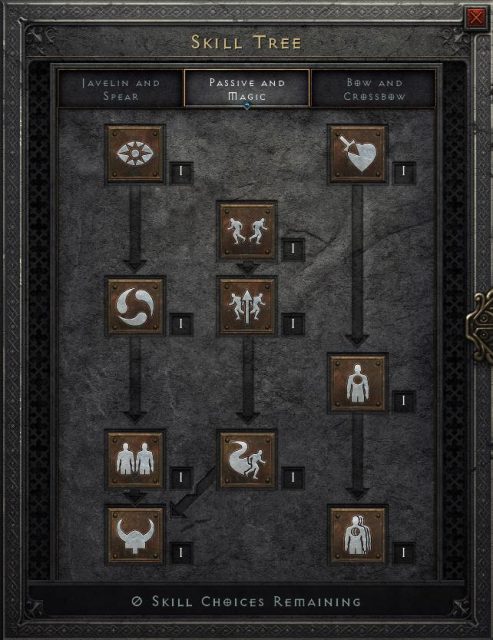 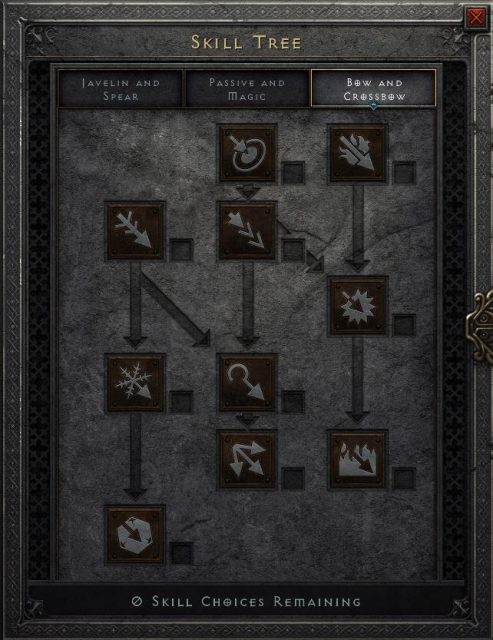 Peace (Runeword): This is a great option early on, providing +2 to all skills, Faster Hit Recovery, Cold Resistance and providing a chance to cast Valkyrie on striking.

When it comes to gloves keep on the look for something that has +JavelineSkills and Attack Speed. Until you find that, focus on defensive stats such as Life and Resistances.

You’ll want to search for rings that have life, life leech, mana leech, stats and resistances.

Try to find an amulet that provides Stats, Health, resistances or +AmazonSkills or +JavalineSkills.

You can insert a Lightning Rainbow Facet to further increase your lightning damage, a Ral Rune or any other resistance rune, or a Cham Rune for cannot be frozen which will free a ring slot. 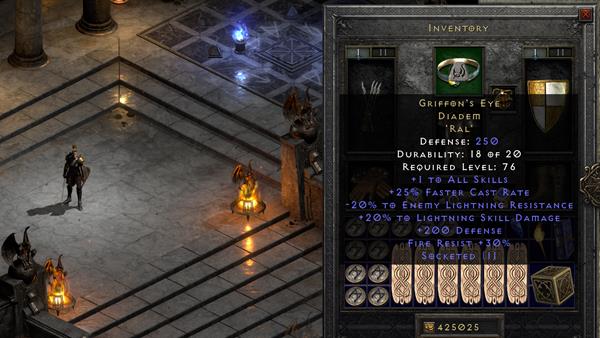 There are a couple of different options when it comes to Javelins and they all have different Dexterity requirements, so consider what you’ll want to use, so you can better distribute your stats: 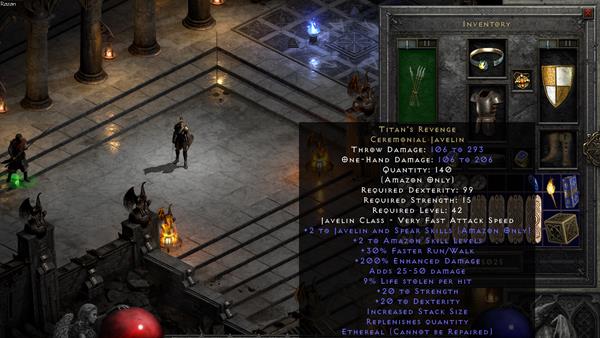 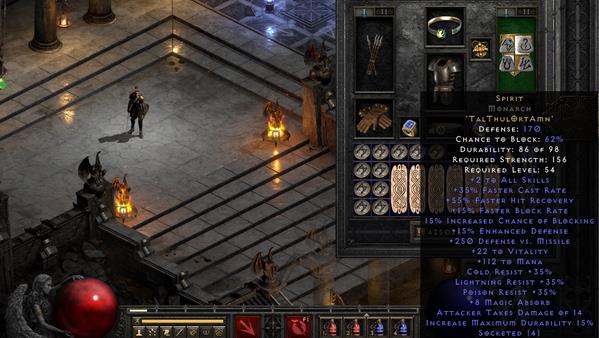 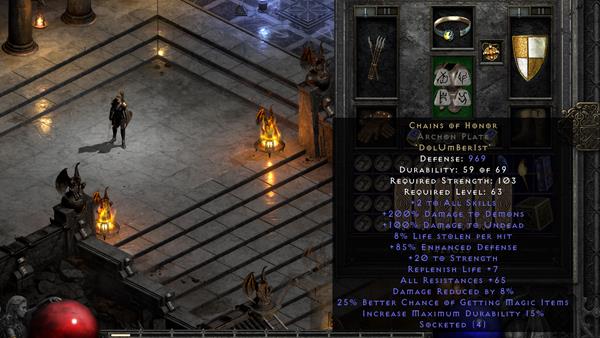 I personally think that razortail is a much better option for this build, but if you opt for Thundergod you might want to spend a couple of more points into Pierce to make sure your attacks are passing through your enemies. 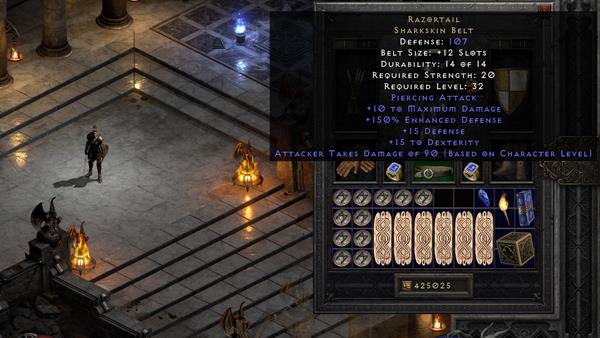 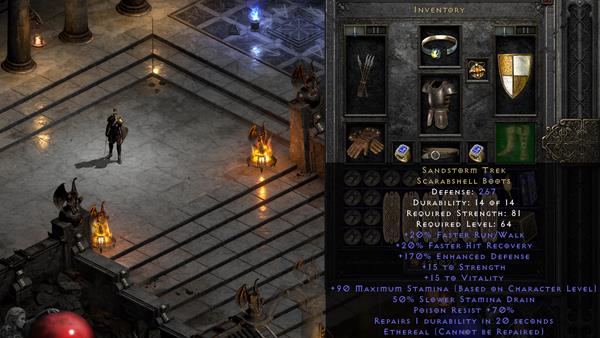 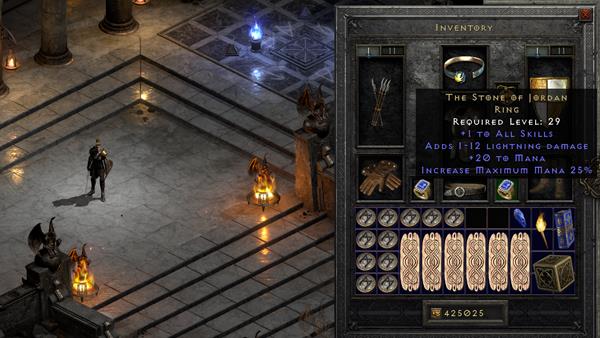 The +Resistance charms are very important, as this build lacks resistances on Hell Difficulty 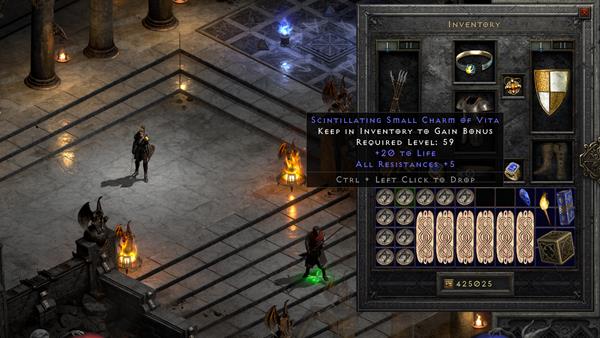 You’ll want to get the Act 2 Holy Freeze Mercenary (from Act 2 Nightmare) for this build. The Holy Freeze Aura is great for dealing with large crowds of enemies.

The Infinity Runeword is very important for this build, as it greatly Reduces enemy’s lightning resistances, allowing you to even kill lightning immune enemies. 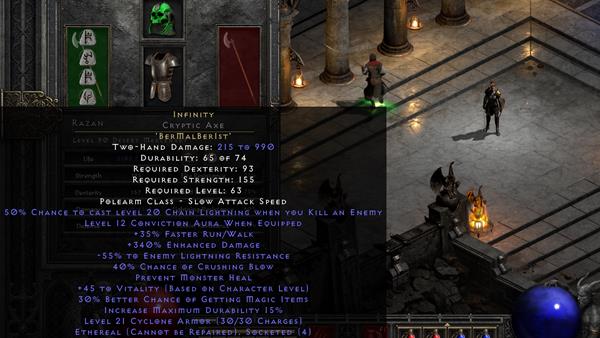 This build consumes a lot of mana, so make sure to run at least 2 o 3 mana potion columns.

Ethereal Titan’s restock on their own, but if you are spamming them too much you may end up with idle time. If this is constantly happening, consider getting a second stack of Titan’s to swap them out while their restock.

Lightning Fury works best against large groups of enemies. Luring all enemies in the area into a single group will allow you to defeat them in a single attack which not only is very fun, but saves a lot of time.

While you can clear all content without issues, The Secret Cow level is filled with tight packs of enemies, making it a perfect target for this build

If you are having trouble with any type of enemy, use Charged Strike on it. This skill can destroy any kind of enemy (including Bosses) in less than a second. 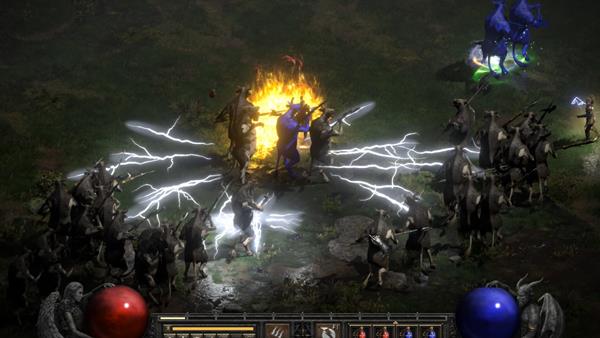