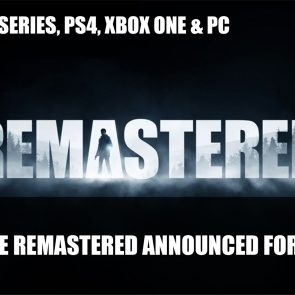 Epic Games Publishing and developer Remedy Entertainment have announced Alan Wake Remastered will be coming to consoles and PC this fall.

A message was shared on the Alan Wake website by The Sudden Stop by writer Sam Lake, “The original game was only available for Xbox 360 and a few years later, PC. We are thrilled about the opportunity to bring the remastered version out for a new generation of platforms. I am excited to hear what you think about Alan Wake.”

He went on to express “Alan Wake Remastered is the original experience you fell in love with all those years ago. We did not want to change that. But the visuals all around, including the character model of Alan Wake himself and the cinematics, have been updated and improved with some choice next-generation upgrades.”

We can’t thank you enough for the love and support you’ve shown #AlanWake these 11 years… but I can try.

I wrote you a letter on our lovely, long-time fan site, @TheSuddenStop.

Welcome to Bright Falls, again, for the first time.

More details will be announced soon according to the post. According to IGN a leak last week, Remedy and publisher Epic announced Alan Wake Remastered, which will be coming with both of the game’s expansions with 4K resolution and will also include new commentary from creative director Sam Lake. While there is no official release date, the previous retailer leaks have unveiled a possible October 5th release date. This also could mean a sequel is on the horizon, but nothing has been confirmed as of yet.

For more news find it here in Pathfinder Wrath Of The Righteous Patch 1.0.1c Adds Fixes And Includes Stability Fixes and Kingdoms Of Amalur: Re-Reckoning Fatesworn DLC In Final Stages Of Production.